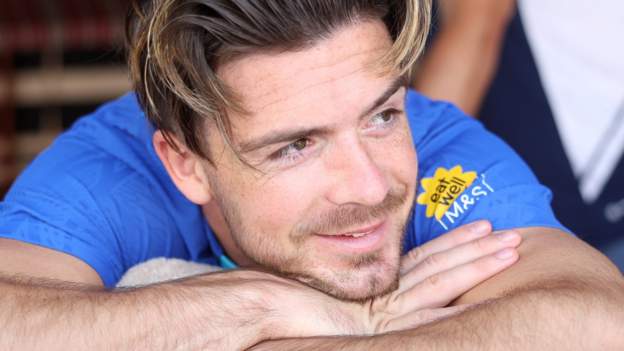 England forward Jack Grealish admits he has made mistakes in his career, but insists he has a “good heart” despite his skirmishes with controversy.

“I do stupid stuff, that was one,” Grealish said of the incident.

Almiron later said Grealish was “a great player” and that he would happily shake hands with him.

“As long as I remember I have never really paid attention to what people say to me off the field,” the Paraguayan said last month.

Grealish, who reached out to apologise to Almiron after the video of his comments went viral, said he was grateful to be forgiven.

“I thought ‘what a guy, man’ because if that was me and somebody had said that about me, I’d have probably been the other way,” said Grealish, adding he was “buzzing” at the Newcastle forward’s good form in the Premier League this season.

“I’ve got a good heart, I think I have. Obviously I’ve done stupid stuff in my life but I think everything that I do good is from my heart.”

The 27-year-old came on in all three of England’s games so far at the World Cup, scoring in the 6-2 win over Iran.

The goal gave him the chance to fulfil a promise to Finlay Fisher, a City-supporting schoolboy with cerebral palsy, and celebrate with a dance the pair had come up with.

“That’s natural – I don’t do that for any clout or whatever,” said Grealish.

“I do that because that’s what I feel like I’m good at sometimes.”

Grealish admitted that he he was annoyed by some of the coverage of the team in the aftermath of a dull 0-0 draw with the United States that came between the group stage wins over Iran and Wales.

“After one game I was reading stuff about how we were dismal. That can happen to anyone. I think we do deserve some credit as a team,” he added

Stephanie Frappart: When might a woman referee a Premier League game?
World Cup 2022: Did it cross the line? Germany out as Japan and Spain progress