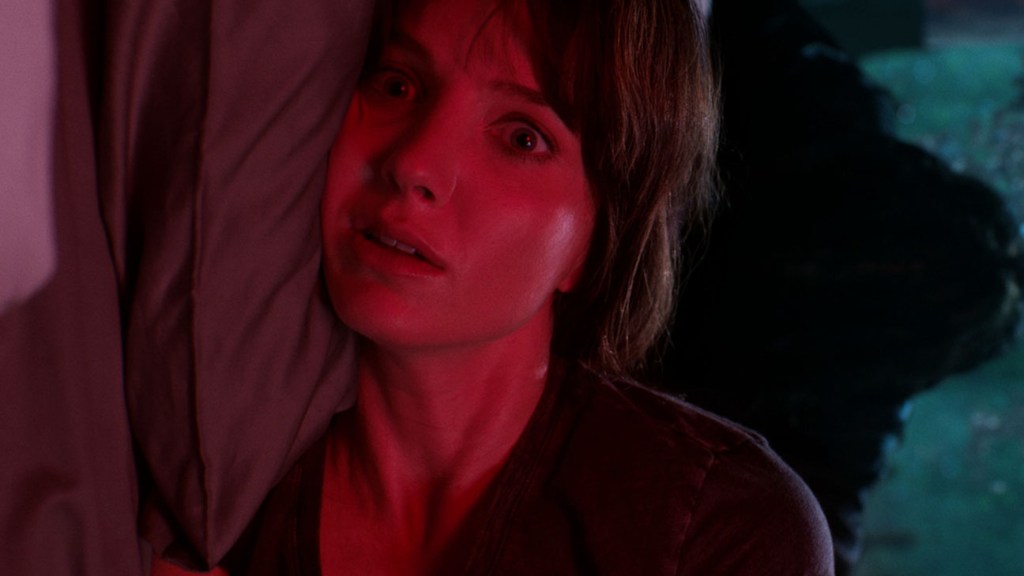 The latest horror film directed by James Wan (the Conjuring franchise) is being offered on HBO Max for a limited time coinciding with its theatrical release, but it would be advisable to catch it in a theater. Not so much because it demands to be seen on the big screen, but rather so you can join in on the rollicking laughter of your fellow moviegoers.

Take the ingredients of films by the likes of Dario Argento, David Cronenberg and Brian De Palma, throw them into a blender, and you’ll get something approximating this ambitious but misconceived effort. While Malignant clearly reflects the filmmaker’s love for classic giallo, it feels less an homage than the sort of half-baked imitation conceived as the result of a dare.

Akela Cooper’s screenplay — based on an idea she developed with Wan and his wife, actress Ingrid Bisu (The Nun) — begins with a prologue set in the sort of storm-battered, cliffside mental hospital seen only in gothic horror tales. There, Dr. Weaver (Jacqueline McKenzie) is attending to a patient who’s clearly in need of drastic intervention.

“It’s time to cut out the cancer,” Dr. Weaver announces dramatically to her fellow doctors. How this shocking introduction relates to the rest of the story is revealed only gradually, but suffice it to say that narrative coherence was clearly not a priority.

Cut to the present day, where we’re introduced to the main character, the very pregnant Madison (Annabelle Wallis, of The Mummy and Annabelle), whose abusive husband (Jake Abel) repeatedly beats her, at one point bashing her head against the wall so severely that she wakes up with her pillow covered in blood. Hubby soon pays dearly for his transgressions, when he’s killed by a home intruder who seems to be some sort of demonic creature. As it’s later sarcastically described in the film, think Sloth from The Goonies, if he had also been a contortionist and was in bad need of a haircut.

Upon her recovery from her injuries, Madison, whom we learn has suffered a series of miscarriages, begins experiencing horrific visions in which she sees the same creature brutally murdering other victims, including Dr. Weaver and the other physicians involved in the opening sequence. Needless to say, the gruesome killing spree attracts the interest of a pair of homicide detectives (George Young, Michole Briana White), one of whom becomes convinced that Madison herself is the murderer. Meanwhile, Madison receives a series of communications from the professed killer. He calls himself Gabriel, which also happens to be the name of her imaginary childhood friend, the memories of whom she’d long repressed.

For a while Malignant works fairly well as a creepy, if slow-moving, thriller, tinged with supernatural elements rendered with visually striking CGI effects. But as more of the jaw-droppingly outlandish scenario is revealed, the sillier and more frenetic the proceedings become, devolving into a series of ludicrous chases and extremely gory fight sequences in which Gabriel displays his admirable physical agility and lethal skills with a blade. The most elaborate set piece, staged in undeniably arresting fashion, involves a massacre in which he wreaks murderous havoc in what looks to be the world’s largest holding cell for female prisoners.

The film might have been outrageously bizarre fun if it displayed any humor or ironic self-consciousness, but everything is played so straight that viewers will find themselves laughing not with the film but at it. The characterizations are paper-thin, the dialogue is perfunctory, and the performances are, to put it charitably, adequate at best. And while Wallis, as the beleaguered heroine, certainly projects abject terror effectively enough, one longs for the nuance that a Margot Kidder or Jessica Harper would have brought to the role.