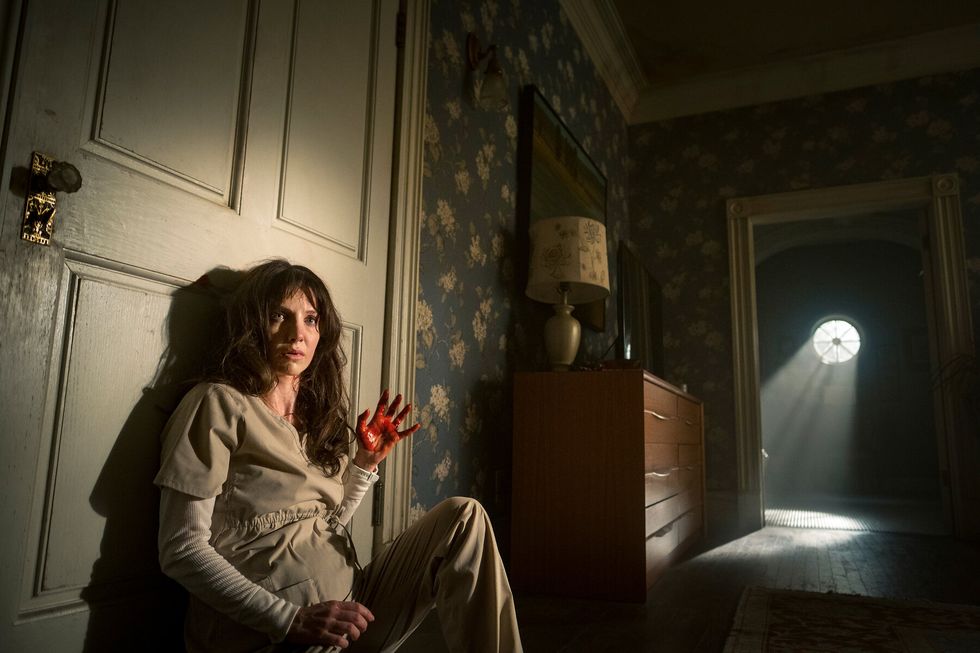 The final thirty minutes of Malignant, you may have heard, are batshit insane. This is true, and alone make James Wan’s latest foray into horror the sort of wacko effort worthy of one’s weekend evening, be it in theaters or on HBO Max (where it’s currently available for the next few weeks). Nonetheless, there’s more to the director’s psychotronic freak-out than merely its bonkers twist and hilariously over-the-top follow-through. Riding a wave of ridiculousness that crescendos at just the right moment, it’s a gory and gonzo mash-up that straddles various lines with aplomb: between seriousness and camp; homage and rip-off; and novelty and patchwork-quilt derivation.

Wan has never been a subtle filmmaker; Saw was a rusty blade of a movie, and The Conjuring and Insidious were blockbusters that were described as having “borrowed” from illustrious predecessors as a euphemistic way of avoiding using the term “stolen.” The same can be said about Malignant, which plays like a delirious hybrid of (to name just a few) The Ring, The Exorcist, The Dark Half, Possession and Harry Potter and the Sorcerer’s Stone, along with assorted Brian De Palma and David Cronenberg touches and a police-station slaughter straight out of The Matrix. It’s also loudly and proudly indebted to the Italian giallos of the ‘60s and ‘70s, those lurid thrillers in which split-personality madmen—always masked, and wearing gloves—carried out fatal massacres with phallic blades in color-coded nocturnal landscapes. From its POV shots of a fiend in a leather coat and gloves slaying innocent victims with a giant gold dagger (fashioned from a medical award) and its Goblins-redux electronic score, to the endless, pulsating red light cutting through its gloomy interior and exterior spaces as well as the mysterious narrative relationship shared by its villain and and heroine, Malignant wears its Dario Argento and Mario Bava fandom on its crimson-stained sleeve.

Wan’s primary horror trick is repurposing the old for new multiplex audiences, splicing together time-proven elements and giving them a high-polish studio sheen. That modus operandi rarely results in scares; Wan telegraphs his influences and shocks so overtly that it’s easy to prepare for the loud-noise jolt tactics lurking around each haunted-house corner. No amount of protestations to the contrary will ever make The Conjuring or Insidious terrifying, and Malignant is similarly devoid of genuine tension. Still, the crucial component separating it from Wan’s prior mix-and-match output is a knowing sense of humor. Fashioned like a rollercoaster ride through a funhouse version of horror’s past, it evokes the aesthetics and tone of giallos but juices them with the maximalist baroqueness that Wan previously brought to not only The Conjuring but Aquaman and Furious 7, creating a hyper-stylized, self-aware supernatural spectacular that draws its power from wink-wink absurdity.

Malignant has all the trademarks of a Wan film, including 360-degree rotating cinematography, shots that zoom into and race after characters in shadowy passageways, and a fondness for CGI boogeymen. In this case, that would be Gabriel, a specter who’s killing doctors that have a secretive link to Madison (Annabelle Wallis), a pale brunette made up to resemble a cross between Suspiria’s Jessica Harper and Possession’s Isabelle Adjani. A 1993 prologue presents researchers tending to a mutant child who has the power to control electricity and machines, and speaks through radios. When Madison begins seeing visions of a malevolent figure dispatching her abusive husband Derek (Jake Abel) as well as older physicians—sequences in which Wan’s camera revolves around Madison as the walls of her world melt away to reveal a different location—it becomes clear that this psycho and the introduction’s young monster are one and the same.

Gabriel wears traditional giallo attire and covers his face with long stringy hair à la The Ring’s Sadako/Samara, and his reign of terror greatly upsets Madison, who initially watches Gabriel snap Derek’s neck into a right angle. After waking from this attack, Madison learns that she’s lost the unborn baby her physically assaultive spouse didn’t want—the last of many miscarriages she’s apparently suffered in recent years. With wide eyes and a ghostly complexion, Wallis’ Madison is a tormented heroine who’s clearly related to Gabriel in some fundamental way. Yet Malignant hides the true nature of this connection for an impressively long time; no matter the logical guesses one devises while watching Gabriel dispatch subsequent enemies, it’s difficult to predict precisely where the film is headed.

Wallis’ Madison is a tormented heroine who’s clearly related to Gabriel in some fundamental way.

Before it arrives at that shocker, Malignant plays a familiar giallo game, with Madison and her wannabe-actor sister Sydney (Maddie Hasson) turning to two detectives – sympathetic Kekoa Shaw (George Young) and disbelieving Regina Moss (Michole Briana White)—to help figure out what the hell is going on. Revelations, including about Madison’s childhood as an adopted kid, come via unearthed medical files and VHS tapes of doctors tending to children at spooky psychiatric hospitals located on a misty cliff, the latter of which Sydney visits in the dead of night, rummaging about the abandoned (and comically foreboding) place in search of clues about Madison’s birth parents—which, wouldn’t you know, she finds in approximately three seconds. Like its ‘90s-grade credit sequence set to NIN-knockoff industrial metal, Malignant is so brazenly unoriginal and overblown that it’s impossible to imagine Wan not being in on the joke.

Akela Cooper’s script (from a story co-conceived with Wan and Ingrid Bisu) is brash and obvious, and alongside Wan’s florid direction and performances that blend earnestness with outrageousness, it delivers a brand of stilted drama that giallos are famous for (all that’s missing is reverb-laced ADR work). Malignant’s human exchanges are as deliberately wooden as its centerpieces are extravagant. Wan channels myriad forefathers with glee, be it by assuming Gabriel’s perspective as he stalks his prey, or staging chases in subterranean caverns where the ground is covered in mist and each chamber is populated by discarded 19th-century carriages and barrels. Along the way, themes of spousal abuse, feminine agency and the nature of family are all tossed at the screen with gusto, as is plentiful talk about buried pasts, which Malignant treats literally and figuratively and then really freaking literally.

All of which brings us to the film’s bombshell: Gabriel, who’s previously been revealed to boast a brain-y mush-face with one eyeball, is actually inside Madison, an autonomous parasitic conjoined twin whose deformed torso—replete with tiny T-Rex arms!—used to exist on Madison’s back until surgeons excised the tumorous creature. Or, at least, excised most of him; in what is surely the funniest scene in recent horror history, one of the doctors admits (on a VHS recording of the procedure) that they couldn’t remove all of Gabriel from Madison’s shared brain, so they literally just shoved the remaining parts of him into her head, as if her noggin were just an overstuffed closet. Consequently, everything that’s taken place has been the handiwork of Madison while under the control of Gabriel, who was awakened when Derek smashed his wife’s cranium against a wall at tale’s outset, and who now emerges out of her constantly bleeding skull and turns her into a backwards-walking beast with astounding fighting skills.

Gabriel is like Lord Voldemort by way of Total Recall’s Kuato, and even more hilarious than that sounds, since he performs his rampages while physically moving in reverse, Wallis’ sleeping countenance on the opposite side of his growling raw-meat mug. There’s simply no way to be frightened by Gabriel, and Malignant thankfully recognizes this, having him execute his climactic bloodbath in Wachowskis-esque slow-motion that leads the entire affair right up to the precipice of parody. It’s as if Wan and company are actively courting laughter, an impression bolstered by the concluding psychic showdown between Madison (the oppressed vessel) and Gabriel (the corrupting leech), during which she imprisons her adversary in a mental jail cell and then proclaims – with a straight face that Wallis should earn an award for maintaining—that she knows he’ll eventually break free, “but next time, I’ll be ready for you!”

Such cornball hysteria doesn’t make Malignant great; Wan’s habit of underlining his cherished source material largely neuters suspense, and the proceedings’ craziness sometimes makes the film feel as if it’s straining for cult-classic status. Yet at least here, the director takes considerable pleasure in recombining stock ingredients into an entertainingly loopy stew, and the unbridled silliness of the venture ultimately trumps its shortcomings. It’s a goofball B-movie throwback on a studio budget designed to be watched with—and laughed at by—friends on an early fall night, and in the end, there are far worse things than that.

Nick Schager
Nick Schager is a NYC-area film critic and culture writer with twenty years of professional experience writing about all the movies you love, and countless others that you don’t.