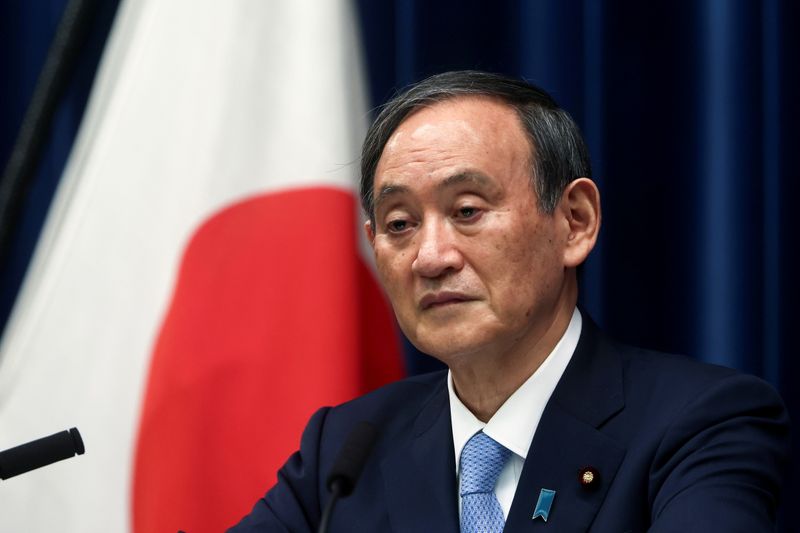 © Reuters. FILE PHOTO: Japan’s Prime Minister Yoshihide Suga speaks during a news conference after the government’s decision to exted a state of emergency amid coronavirus disease (COVID-19) pandemic, at the prime minister’s official residence in Tokyo, Japan May 28

TOKYO (Reuters) -Japanese Prime Minister Yoshihide Suga is likely to compile another big economic stimulus package before calling a snap election in September, the newspaper said on Thursday, although most major economies have scaled back crisis-mode policies to combat the coronavirus.

Opposition parties have called for a package sized around 30 trillion yen ($274 billion), a proposal Suga brushed aside in a debate with their leaders on Wednesday.

While the Nikkei did not report the expected size of the package, some analysts put a ballpark figure of 20-30 trillion yen as it would be enough to fill Japan’s output gap – or the estimated size of slack in the economy.

“The output gap seems to be a benchmark when the government compiles a stimulus package, so the next one could be sized around 20-30 trillion yen or even bigger,” said Toru Suehiro, a senior economist at Daiwa Securities.

“But the immediate boost to growth may be limited, as most spending will be for safety nets and steps like digitalisation and green investment that take long for the effect to appear.”

Tokyo has deployed massive stimulus packages totalling $3 trillion over the past year to combat the pandemic, further straining public finances by adding to the debt pile that is the biggest among major industrialised nations.

Suga has repeatedly brushed aside the chance of compiling another stimulus package any time soon, arguing that the government still had money left over from a pool of reserves set aside to meet immediate funding needs to combat the pandemic.

With some lawmakers from within his own Liberal Democratic Party (LDP) calling for bigger spending, however, many analysts expect Suga to compile an extra budget to fund another stimulus package later this year.

The size and timing of the package will depend much on when Suga call a snap election, a decision complicated by low approval ratings for his handling of the pandemic and the Tokyo Olympic Games starting from July 23.

A lower house election must be held around the time the incumbent lawmakers’ term end on Oct. 21. Suga must also win a ruling party leadership election when his term ends on Sept. 30.

Analysis-The great British reopening: how investors are picking their bets
By Reuters – Jun 10, 2021