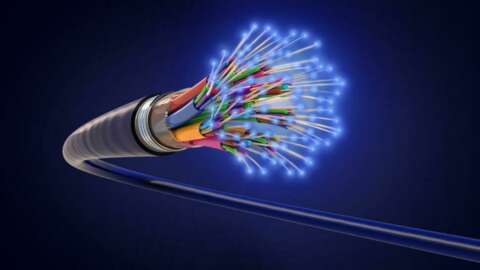 While it’s not as attractive as a land-speed record set in Black Rock Desert, Japan’s latest benchmark when it comes to internet speed is much more impressive. Smashing the 178 terabits per second benchmark it set last year when it worked with UK engineers, the new internet speed record now stands at a lightning-fast 319 terabits per second, as originally reported by Vice.

To achieve this speed, Japan’s National Institute of Information and Communications Technology (NICT) used advanced fiber-optic technology in a lab setting. The NICT system made use of an experimental strand of fiber-optic cable that featured four cores housed in a cable that was roughly the size of a regular fiber optic line.

Data was then looped through coiled bits of fiber optic that created a simulated transmission distance of 1,864 miles, with no degradation in speed being reported. With a path established, the researchers then used a 552-channel comb laser firing at multiple wavelengths through multiple amplifiers to speed through into the history books.

How fast is 319 Tb/s theoretically? In a crucial test under optimum conditions, downloading the entire 220 GB package of Call of Duty: Black Ops Cold War would take 0.005552 seconds. It’s worth noting that a regular solid-state drive couldn’t keep up with those data transfer speeds, but it’s an exciting glimpse into the internet of tomorrow. The NICT believes that the specially-developed four-core optical fiber optic cable can be used with existing systems to provide a massive speed boost.

For now, the technology will be used for data transmission purposes instead of the more important task of keeping Call of Duty: Warzone instantly updated.