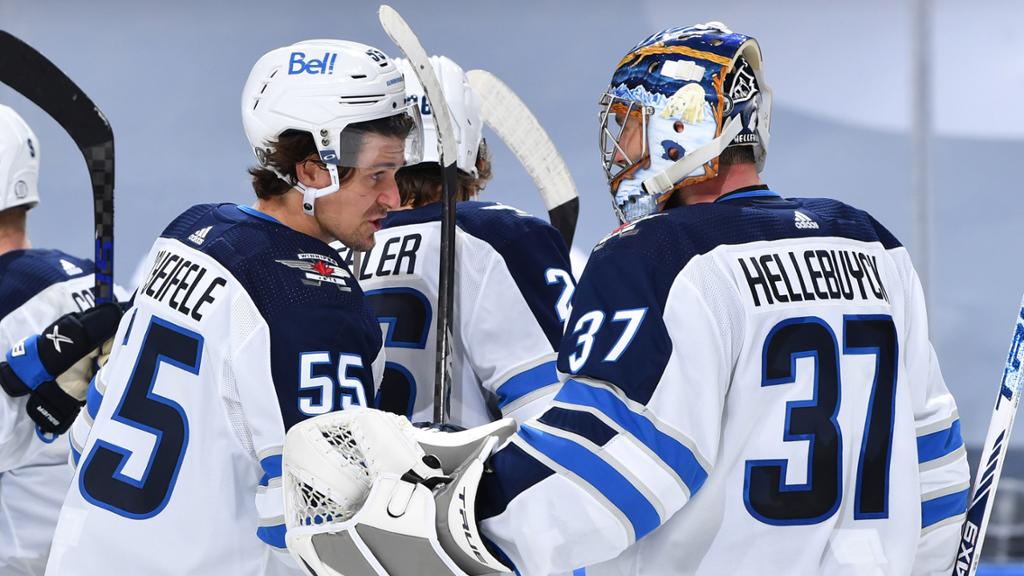 WINNIPEG — The Winnipeg Jets already have discarded their disappointment from being swept by the Montreal Canadiens in the Stanley Cup Second Round and are focusing on what they think is a bright future.

“We are very close to being able to make runs and be a dynasty,” Jets goalie Connor Hellebuyck said Wednesday. “It’s just going to take a few more pieces and we will be there.”

The Jets lost 3-2 in overtime against the Canadiens in Game 4 of the best-of-7 series Monday. Winnipeg swept the Edmonton Oilers in the first round.

He said end-of-season conversations with management this week further convinced him the Jets are focused on winning the Stanley Cup.

“You don’t want to waste a year just going guessing,” Hellebuyck said. “They do want to win, and they want to win now. They are looking for the right pieces. My mindset is right now, and next year I’m going to say the same thing.

“You also don’t want to blow it for future years, so you want to be smart about it. I think our organization definitely wants it now and they’re going to do what they have to do.”

The Jets continue to rebuild at defenseman, a project that began after Dustin Byfuglien retired before the 2019-20 season. Josh Morrissey (seven) and Dylan DeMelo (three) are the defensemen signed for multiple seasons, and a younger group is in the mix for roster spots next season, among them Logan Stanley, 23; Dylan Samberg, 22; and Ville Heinola, 20.

“You can see the pieces coming in, they’re making big moves and playing bigger than themselves,” Hellebuyck said. “When that core starts to go like that, that’s when you start to get a dominating team. We’re close.”

The Jets have qualified for the Stanley Cup Playoffs four consecutive seasons, and reached the Western Conference Final in 2018, and their future should be about continuing in that vein, Wheeler said.

“You get to the final eight of 31 teams, you’re in the conversation,” the Jets captain said. “The hardest part is formulating a core group of players that you believe are the identity of your team, the guys that can push you over the hump, and I think we have that.

“That’s a great step in the right direction, starting with our goaltender and then work it around to some of the guys that are now kind of getting to their mid to late 20s. I mean, that’s a good thing you’re really excited about. In a flat [NHL salary] cap world, that’s going to be kind of the challenge this summer, how do you fit the pieces in to kind of push that core over the top. I guess that’s what remains to be seen.”

“We did a pretty good job this year and we put ourselves in a position where that goal became in sight,” Copp said. “Obviously we didn’t get over the hump and we need to work on, as a whole, being harder to play against, more consistent, but there’s no one quick fix. It’s just everyone taking a step in their individual games, taking a step in our team game, how we work together.

“Guys with another year of experience, another year of being mentally stronger and understanding what kind of game it takes to win in the playoffs. It’s a totality of actions and we’re on the right path.”

Pionk said there are plenty of reasons for optimism.

“I really like the motivation of this core,” he said. “You look at our best players and I think they’re the hardest working guys on the team. They’re the first guys in the rink, the first ones on the ice, the last ones off the ice. … That motivation alone, along with the skill and talent that we have as a core, I think is really exciting for the future.”