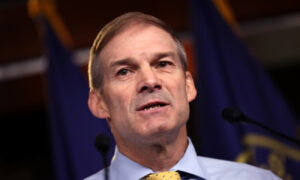 “What’s happening here is a direct violation of the law. And it’s meant to influence, it’s meant to intimidate, the Supreme Court justices because of the draft opinion that was leaked,” Jordan, the top Republican on the House Judiciary Committee, said on NTD’s “Capitol Report.”

That 1973 decision declared access to abortion a constitutional right.

Since the leak, protesters have gone to the homes of various justices who wrote or reportedly signed onto the majority ruling, including Justices Samuel Alito, Amy Coney Barrett, and Brett Kavanaugh.

Activists and others have urged the justices not to go through with the decision, which has not yet been finalized.

Despite federal law prohibiting people from gathering near the home of a judge “with the intent of influencing” the judge, the Department of Justice has announced no prosecutions against any of the protesters.

The agency said Wednesday that Attorney General Merrick Garland, a Biden appointee, has directed the U.S. Marshals Service to help ensure the justices’ safety, but did not mention the law.

Jordan said the pressure campaign on the court is part of a pattern, pointing to Democrat lawmakers and activists pushing to expand the court’s size to minimize the influence of Republican-appointed justices like Alito, who authored the draft opinion.

In 2021, Rep. Jerrold Nadler (D-N.Y.), chairman of the judiciary panel, introduced a bill to pack the court. In April, Democrats attacked conservative Justice Clarence Thomas over alleged conflicts of interest. Then the unprecedented leak happened.

“It is all meant to intimidate, to influence, to get the outcome they want. And that is not how our system is set up—separate and equal branches of government, the rule of law, respect for the court, the independence of the court is how our country is supposed to work, not the way the Democrats are trying to do things,” he added.

After the markup, the House Judiciary Committee passed the legislation. Titled the Supreme Court Ethics, Recusal, and Transparency Act of 2022, it would impose a code of conduct for justices and their employees.

“We expect the justices of our nation’s highest court to hold themselves to the highest standards of ethical conduct, but, in fact, their conduct too often falls below the standards that most other government officials are required to follow,” Nadler said in a statement. “This important legislation will address the growing and persistent ethics crisis at our nation’s highest court.”

Zachary Stieber covers U.S. and world news. He is based in Maryland.

Epoch Watchlist: What to Watch for May 13–19
Florida Enacts Law to Highlight the Evils of Communism