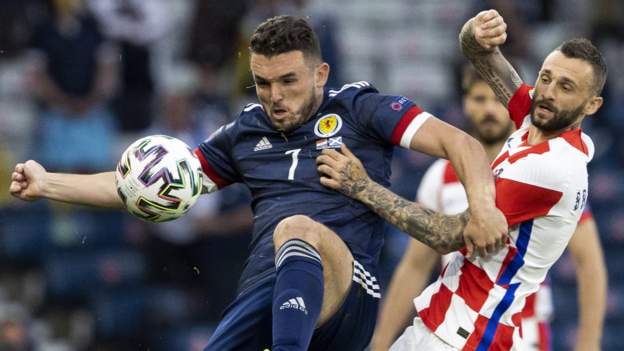 Stephen O’Donnell and Kevin Nisbet have joined the long list of absentees for Scotland’s World Cup qualifier in Denmark on Wednesday.

Motherwell captain O’Donnell cannot travel due to the extent of Denmark’s Covid restrictions and Hibernian striker Nisbet picked up a knock in training.

Both are expected to be available for Saturday’s match at home to Moldova.

John McGinn and Nathan Patterson miss out for Covid-related reasons.

Aston Villa midfielder McGinn revealed at the weekend that he had tested positive for the virus but has no symptoms and is “feeling fine” and Rangers right-back Patterson is self-isolating after being identified as a close contact.

Again, both men should be back for the weekend and next week’s trip to Austria.

Injured Celtic pair James Forrest and Greg Taylor withdrew from the triple-header on Monday, while Manchester United midfielder Scott McTominay and Southampton’s Stuart Armstrong had already been ruled out.

Without O’Donnell, who has missed the last three matches for his club, and Patterson, there is no recognised right-back in the depleted squad.

“It’s a little bit of a curve ball.” head coach Clarke said of O’Donnell’s absence. “It has caught us out a little bit. Its just the way it is with the Covid restrictions and the rules. Different countries have different rules.

“We started with a squad of 26 and go to Denmark with 18 (including three goalkeepers).”

That number will increased to 19 since Oostende defender Jack Hendry is making his own way to Copenhagen.

“Another issue was Jack Hendry,” Clarke explained. “He played in Belgium on Sunday evening and rather than fly him back here, because he would have missed the Uefa deadline for the Covid test which was 09:00 on Monday morning, we Covid tested him in Belgium. He’s okay and will go direct to Denmark and meet up with the squad there so a little bit different than a normal camp.”

On Monday, Clarke said this had been the “most disruptive camp” of his two years in international management.

“It is a completely different blow for me,” explained Clarke. “I was hoping I would have a new coaching team in place. At the very last minute I asked Steven Naismith, who I know as a player, to step up and become an extra pair of eyes on the training pitch.”

After the game in Copenhagen, Scotland host Moldova on Saturday, then visit Austria three days later.

They are currently second in Group F after three games – four points behind leaders Denmark – after drawing with Austria and Israel and beating the Faroe Islands in March. 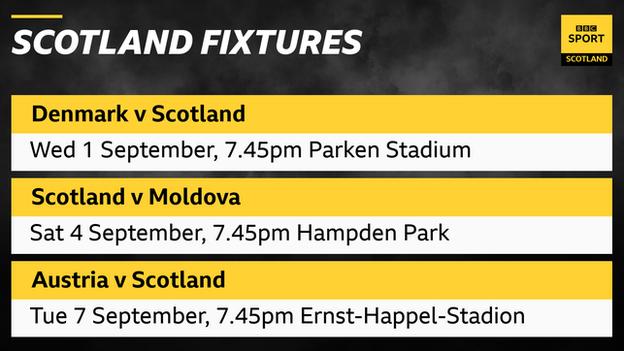