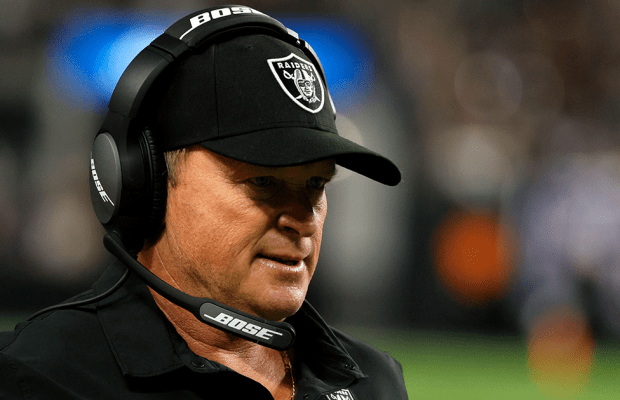 Shortly after announcing his resignation from the team, former Raiders head coach Jon Gruden released a statement in which he apologized to the team’s players, coaches, staff and fans for becoming a distraction.

“I have resigned as Head Coach of the Las Vegas Raiders. I love the Raiders and do not want to be a distraction,” Gruden’s statement read, per ESPN’s Adam Schefter. “Thank you to all the players, coaches, staff, and fans of Raider Nation. I’m sorry, I never meant to hurt anyone.”

Gruden reportedly referred to NFL commissioner Roger Goodell as a “clueless anti football p—y” as well as a “f—-t” in the emails released by the Times. He also claimed the NFL pressured the then-St. Louis Rams to draft Michael Sam, a gay player selected in 2014. Gruden also “criticized Goodell and the league for trying to reduce concussions and said that Eric Reid, a player who had demonstrated during the playing of the national anthem, should be fired.”

Gruden is 22–31 as Raiders head coach since 2018. Las Vegas enters Sunday’s matchup with the Broncos at 3–2 following back-to-back losses to the Chargers and Bears. The Raiders will elevate Rich Bisaccia as the team’s interim head coach, according to Schefter.