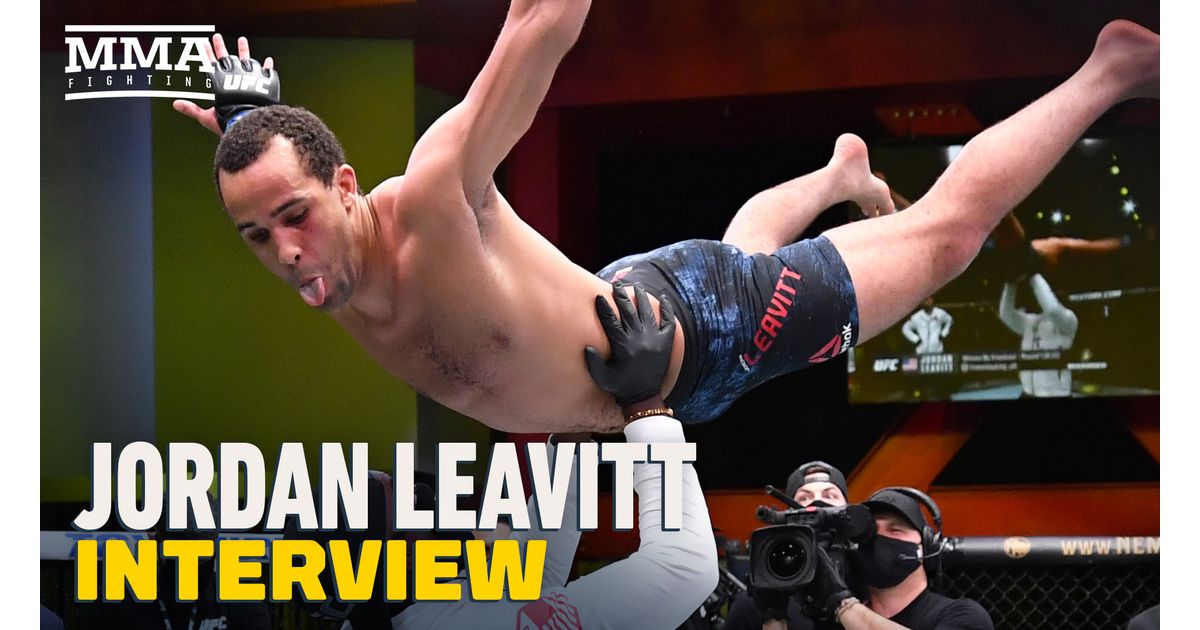 After delivering one of 2020’s top knockouts — and the first of his career — Jordan Leavitt isn’t feeling any pressure to outdo himself in his sophomore UFC appearance.

Leavitt will face Claudio Puelles in a lightweight matchup this Saturday at UFC Vegas 28, which will take place at the UFC APEX and stream on ESPN+. “The Monkey King” had a busy 2020. He competed four times and picked up three finishes for LFA, earning a contract on Dana White’s Contender Series in August. His viral 22-second slam KO of Matt Wiman at December’s UFC Vegas 18 event marked his promotional debut.

While fighters sometimes feel added angst to top their previous performances, the 26-year-old isn’t one of them.

“To be honest, I still see my last knockout victory as more of a lucky happening,” Leavitt told MMA Fighting on What the Heck. “I never train for that and in the moment, it was like, ‘Put the forearm here and then slam him,’ and then it happened. It would be different if I trained those things and that was a tool I knew was in my toolbox. But since it’s not really characteristic of my style, I don’t plan on probably ever doing that again.

“So for me, since it was like a happy accident, I don’t feel any pressure. Yeah, it was the fastest debut in my division’s history, it was a slam knockout, all of these cool things. But it’s just a fist fight at the end of the day. I don’t see why so many guys make it so much crazier and more important then it is. If somebody pushed me on the playground, I would’ve pushed him back and we would’ve fought, we just get paid to do it. A win’s a win, and if I can top that time, that would be wonderful. But you can’t really top that highlight.”

The Syndicate MMA standout, husband, and new father admits that welcoming a baby girl into the world earlier this year has put his priorities in a great place, in an almost tunnel vision state, which he plans on translating into another victory on Saturday.

He will face Puelles (9-2), who will look to extend his winning streak to three after earning victories over Felipe Silva and Marcos Moriano for his first two octagon wins. It will be the first fight since the win over Moriano in September 2019. From a stylistic perspective, Leavitt sees some similarities between the two 155ers, which could make for a dandy of a fight – or a somewhat cumbersome affair.

“Honestly, it could probably be very awkward,” Leavitt explained. “There’s a pretty good chance this could be an ugly, strange, awkward decision, but I’m hoping I finish him. I’m trying to finish him for you guys. But yeah, when this fight was given to me, I was like, ‘This is gonna be really good or really sluggish.’

“He’s more reactionary. He walks forward, gets scared and flustered and then takes people down—which I would do the same if people pressured me, they just don’t yet—and I’m a person who presses forward and takes them down. So I feel like this fight will be decided by who is more comfortable on the feet and who is more comfortable being patient. And I love pressure. I love scrambles when things get going and I feel like he shies away from it. We’re both young, and even though he hasn’t fought in a year and a half on fight night, I remember how much I improved from 22 [years old] to 24, and I imagine he’ll improve just as much.

“If I fight the Claudio Puelles from 2018, 2019, I think that there’s several clear paths to victory for me, but I want this to be a hard fight. I haven’t had a hard pro fight yet and I got into this to grow as a fighter. I’m not going out there looking for a loss, not so much as looking for wins. So I hope that he’s game. I’d really appreciate if he was game.”

Ahead of his second UFC appearance, Leavitt has started working with grappling ace and longtime coach Neil Melanson on a regular basis. Although Melanson will not be in his corner this time around due to underlying health issues, Leavitt plans to use the time he has spent with the new addition to his team to his advantage.

“He’s taking it to the next level, my style is going to be a little more sadistic,” Leavitt said of Melanson. “I’m very blessed I get to work with him regularly, two to three times a week. I remember buying his triangle book when I was in high school, and I remember buying his instructionals and it’s pretty wild to have him on my side now.

“But I’m gonna pressure him. He’s gonna shoot and I’m gonna punish him for his insolence.”