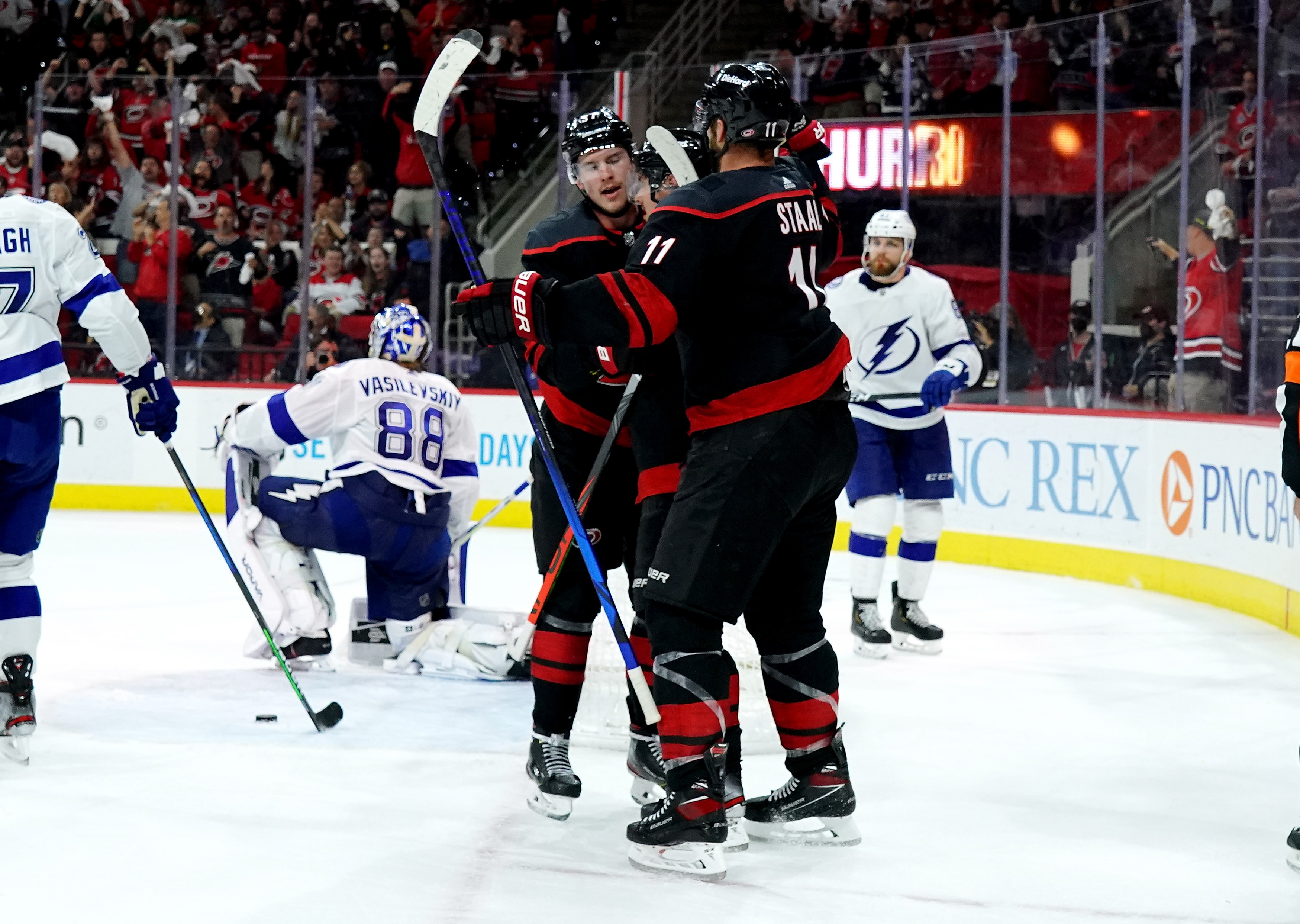 The Bolts still lead the series 2-1, but a victory in Game 4 would steal home-ice advantage back for Carolina as the defending champion Lightning look to march back to the Stanley Cup Final.

Jordan Staal scored the game-winner 5:57 into overtime off a deflection from Sebastian Aho as the Canes avoided a dreaded 3-0 series deficit.

Usually it’s the Tampa Bay power play that puts games away. On Thursday it was Carolina’s turn—but not without a few scares first.

After battling to a 2-2 draw through 59 minutes, the Canes had almost made it to overtime without incident. Then Alex Killorn bullied his way down the ice and drew a tripping call on Dougie Hamilton. That gave Tampa an opportunity to either end regulation with a power play goal, or send their special teams back on the ice to begin OT.

Thanks to some stellar netminding from Petr Mrazek, the latter came to fruition.

It took just over five minutes for #tblightning to get their first shot on goal, from Victor Hedman. Canes doing a really good job creating possession, a few good looks so far

Mrazek made some of his best saves all season during a two-minute stretch separated by an intermission, stopping three point-blank chances by Tampa Bay to kill off the remainder of Hamilton’s penalty.

The only question left was whether or not the Canes would get an overtime power play of their own. A Kucherov holding-the-stick call 4:16 into the frame answered that.

As one of the best players on the Lightning headed off to the box, Sebastian Aho took to the ice looking to end Game 3 and give his team a jolt of life heading into Game 4.

That Hamilton helped set up the play leading to Staal’s winner only made the victory sweeter for Carolina. The defenseman swung the puck out wide to Teuvo Teravainen, who found Aho in the slot for a quick one-timer that bounced off Staal’s stick.

Despite being out-shot 37-27, the Canes found a way to avoid the brink of elimination for at least another day and ensure they’ll make it to Game 5.

Before he scored the goal that gave Carolina its first lead since Game 4 against the Nashville Predators in the opening round, there was concern over whether or not Brett Pesce would even remain in the game.

The icebreaker belongs to the @Canes in Game 3. 🚨#LetsGoCanes | #StanleyCup pic.twitter.com/Cdtx5pKoRI

Late in the first period, Pesce took a blindside hit from Nikita Kucherov at center ice that sent the Tampa Bay winger to the box for interference and ignited a scrum in the neutral zone. Pesce wasn’t on the ice for that part. He immediately went down the tunnel to get checked out by team trainers. The ensuing Canes power play only seemed to energize the Lightning, who continually cleared the puck and didn’t let Carolina set up their offense once during the man-advantage.

Brett Pesce on the hit: “To get hit up high…I thought it was maybe a little dirty, but it’s playoff hockey…the NHL required me to go through all the concussion testing but I’m fine.”

By the start of the second period, Pesce was back on the ice and wreaking havoc on Tampa’s defense, burying a one-timer past the right shoulder of Andrei Vasilevskiy to open the scoring minutes into the second period.

It was the first time in more than 200 minutes Vasilevskiy allowed a 5-on-5 goal dating back to Game 5 against the Florida Panthers in the previous round. And after the Bolts held Carolina to just one goal in Games 1 and 2, it seemed like an opportunity for the Hurricanes to prove their offense could still deliver.

A second goal to make it 2-0 three minutes later certainly helped their case.

Aho grabbed a sensational touch-pass from Teravainen at center ice, jumped past both Lightning defenseman and buried another one past Vasilevskiy.

If only the offensive outburst carried over the special teams, where the Lightning were able to even things up before the second intermission, the Canes would’ve taken Game 3 easily. As quickly as Tampa Bay had fallen in a 2-0 hole, they’d evened things up once again thanks to goals from Brayden Point and Killorn.

Brayden Point scores his 6th goal of the playoffs and 4th power-play goal. He leads the #Bolts in both categories so far this postseason. #CARvsTBL

The Lightning power play is so dynamic 🔥 pic.twitter.com/3OHkNy0vzW

Things would get even more difficult for Caroline before the period ended, as forward Warren Foegele suffered an upper-body injury on a clean hit from Erik Cernak and was ruled out for the remainder of the game.

Already playing without forwards Nino Niederreiter (upper body) and Vincent Trocheck (undisclosed), the loss of a third forward shortened the Canes’ bench and forced their top stars to skate even more than they were already planning on.

The two clubs will remain in Florida a bit longer with Game 4 slated for Saturday, June 5 at 4 p.m. ET on USA Network.