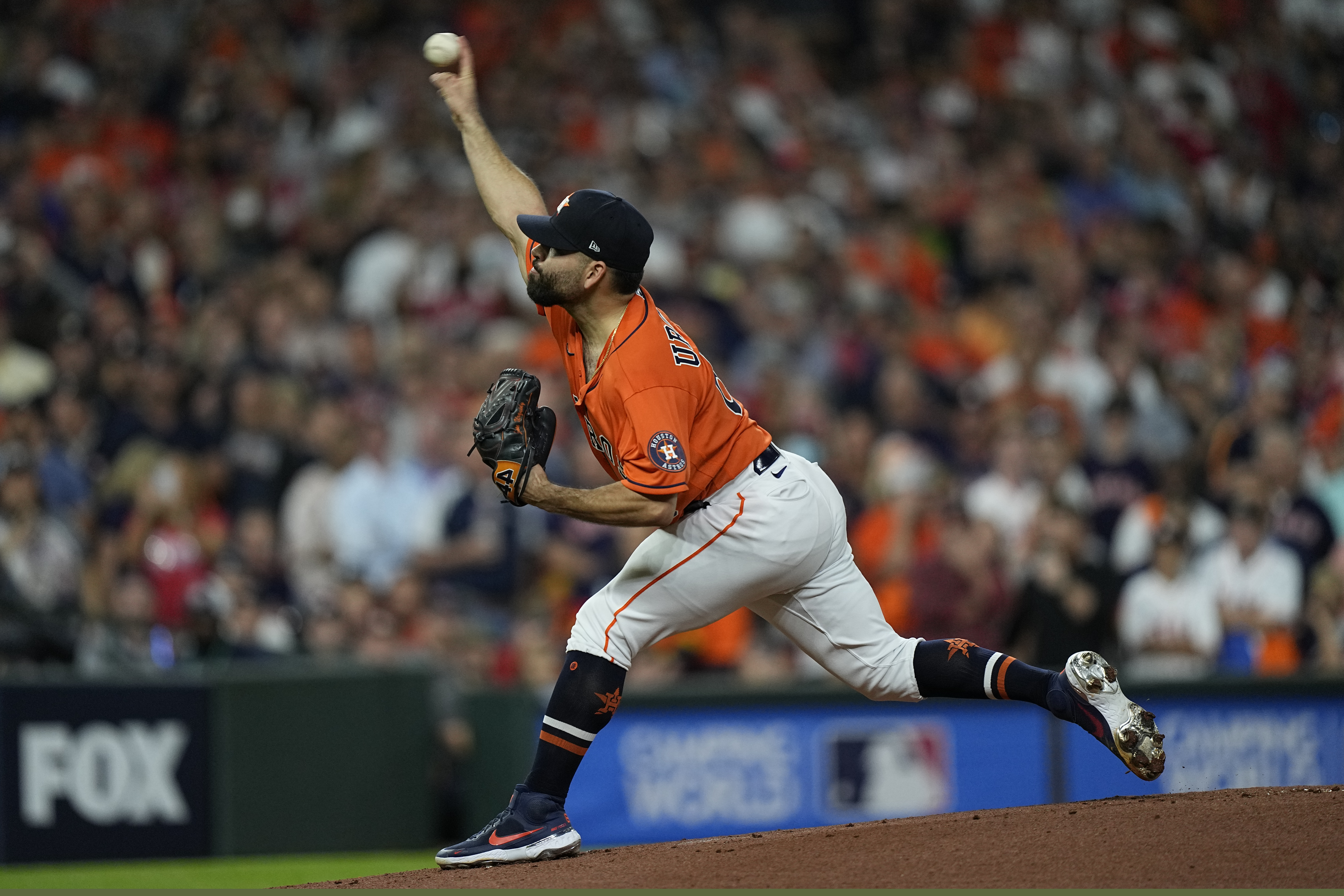 The Houston Astros have tied the World Series at one game apiece after beating the visiting Atlanta Braves 7-2 on Wednesday at Minute Maid Park.

Houston’s four-run second inning proved to be the difference, with Jose Siri, Martin Maldonado and Michael Brantley all smacking RBI singles to help give the Astros a 5-1 lead.

Three strikeouts for José Urquidy in the first. 🔥 pic.twitter.com/BfXYZwG7jq

Houston relievers shut out Atlanta for the final four frames.

D’Arnaud’s blast put Atlanta up 1-0 in the second.

Altuve’s shot added more insurance to the Astros with a 7-2 edge.

He also added a first-inning double and scored on an Alex Bregman sacrifice fly.

Atlanta defeated Houston 6-2 on Tuesday to begin the 2021 Fall Classic.

The long ball helped the Astros all season to the tune of 221 home runs en route to their American League West crown. Eight players hit 12 or more home runs, and a quartet hit 26 or more out of the park.

Yordan Alvarez’s postseason power surge has been the difference thus far in October, but on Wednesday, the Astros won in a different fashion and with a new cast of characters.

The bottom of the order got things going to make the difference.

With the score tied at one, Kyle Tucker and Yuli Gurriel hit singles to put runners on the corners with one out.

That’s when Siri came to the dish and ran out an infield single to give Houston the 2-1 edge.

Maldonado, who hit .172 during the regular season, then plated Gurriel with an RBI single for a 3-1 lead. An Eddie Rosario overthrow then scored Siri, who rushed home for the fourth Astro run of the game.

Brantley then finished the outburst with his own RBI single to score Maldonado.

Siri, Maldonado and Brantley aren’t known as power hitters. Maldonado had the most homers among them with 12 this year, although Siri’s four came in 21 contests.

Still, Houston showed it doesn’t need the top half of the order to bash home runs to win ballgames. Bregman, Alvarez and Carlos Correa, who hit third through fifth in the order, notably went just 1-for-9.

On Wednesday, the Astros’ bottom half of the order got it done with some timely hitting and baserunning, and Altuve and the pitching staff did the rest.

Atlanta Knocks on Door, But Urquidy, Astros Don’t Let Them In

Atlanta had its chances to break this game open a la Game 1, but missed opportunities ultimately spelled doom for the National League champs.

They started early, with Jorge Soler finding himself at bat with runners on second and first with two out in the first. However, Urquidy got him swinging with a 94 mph fastball to end the threat.

Atlanta looked like it might have Urquidy and the Astros on the ropes in the fifth, with d’Arnaud landing on second following a single and wild pitch.

Up came NL Championship Series MVP Rosario, one of the hottest hitters in baseball. Urquidy got him to ground out, but a Freddie Freeman single kept hopes alive to plate d’Arnaud and cut the score to 5-2.

Ozzie Albies then strolled to the dish and hit a screaming liner down the first-base line, but Gurriel was there to snag the ball.

The Astros bullpen then answered the phone for the final 12 outs. A one-out Soler double offered some intrigue in the sixth, but a pair of harmless outs in a Joc Pederson flyout and an Adam Duvall popout ended the frame.

And that was pretty much it for Atlanta, who managed just two walks and no hits in the final three innings and didn’t advance any runners past first in that span.

The combination of Cristian Javier, Phil Maton, Ryan Pressly and Kendall Graveman tossed four shutout innings. That was more than good enough to send the series back to Atlanta tied at one.

Atlanta will host Houston for Game 3 from Truist Park on Friday at 8:09 p.m. ET.