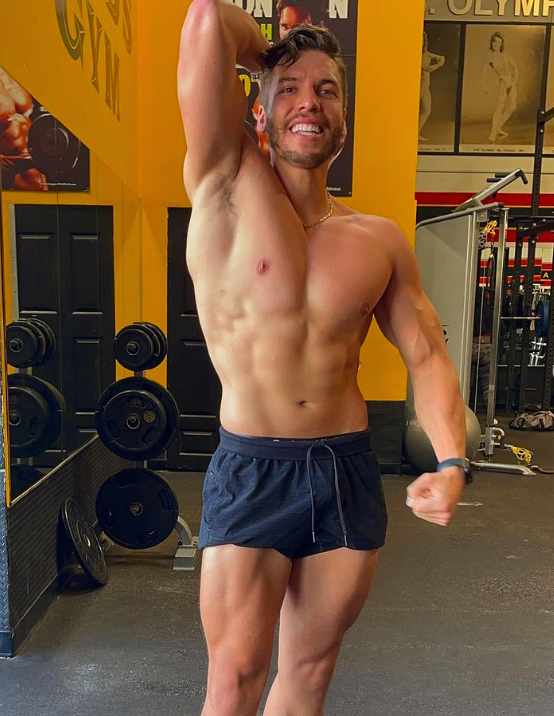 Joseph Baena marked the start of the weekend with a new gym photo on Instagram, showing off his leg day gains in a progress pic from Gold’s Gym in Venice Beach, the bodybuilding hub where he is a regular.

“Friyay legs!” He wrote in the caption, baring his quads in a skimpy pair of shorts and in turn becoming one of many guys, like The Rock and Milo Ventimiglia, who have embraced a shorter inseam this year and heralded #QuadSummer.

Of course, this being Baena, he didn’t stop at just photographing his legs—he also ditched his shirt and flexed like hell to showcase his swole upper body. It’s the actor and realtor’s go-to trick after a workout; he regularly posts photos to social media in which he strikes a pose and recreates some of his father’s most famous physique show tableaus from his bodybuilding days.

In case you somehow didn’t know, Baena’s dad is none other than Arnold Schwarzenegger. And the apple doesn’t fall too far from the tree where the gains are concerned. Baena, a keen bodybuilder in his own right, is following in the seven-time Mr. Olympia’s footsteps. He trains religiously at Gold’s Gym—he even had a gym-themed birthday party—and has expressed interest in entering bodybuilding competitions himself.

And if he ever does decide to make that leap, he will have the “world’s best training partner” on hand to help coach him through the process: Baena and Schwarzenegger frequently work out together, and Baena has previously said that a gym session with the Terminator is like nothing else. “You have to go all out and absolutely NO cheating with him,” he wrote on social media after hitting Gold’s with his dad when gyms reopened earlier this year.