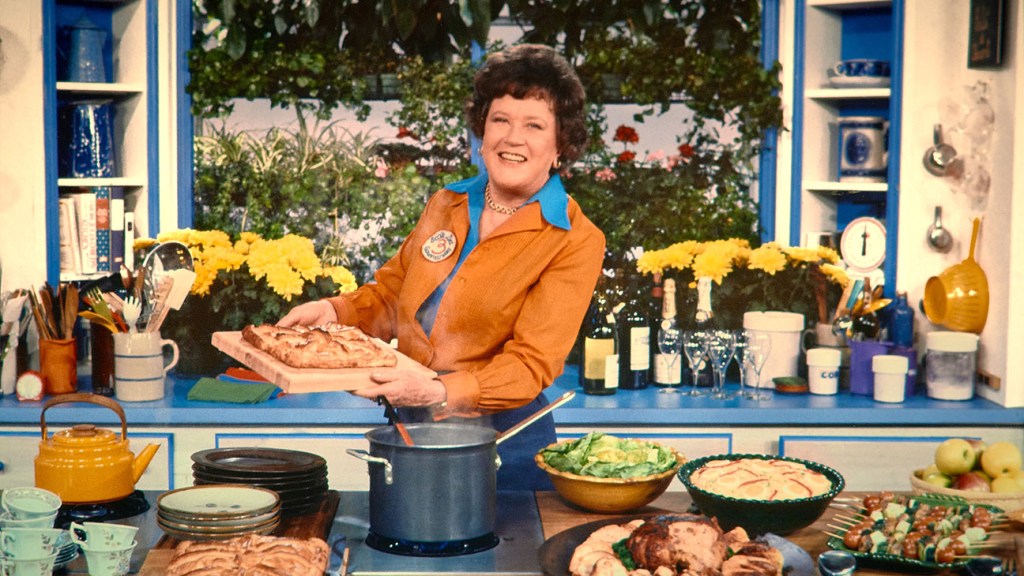 America’s first lady of food, Julia Child, receives an affectionate and respectful but also quietly sensuous tribute in Julie Cohen and Betsy West’s feature-length documentary Julia. Just as its subject, the cookbook writer and TV cooking show pioneer, managed to do with French food for the American masses, this serves up traditional bio-doc fare but tweaks the formula and ingredients ever so slightly, adding highly styled macro-shot cooking sequences in order to suit the palates of food-loving viewers of a certain age.

The result is a little safe and a teensy bit dull compared to some of the more adventurous efforts in the world of film-as-food-porn these days, but that’s fine. Like Cohen and West’s previous works, the 2018 Ruth Bader Ginsburg tribute RBG and its companion piece from this year, My Name Is Pauli Murray, this will hit the spot for viewers and possibly awards-bestowing bodies who hunger for stories of audacious, norm-shattering women.


Satisfying, if a little bland.

Anchored by interview material with producer Russell Morash, the opening minutes offer a tiny flash-forward to the moment when Child made her television debut cooking an omelet as a guest on a book-themed show for Boston PBS station WGBH in 1961, followed by a montage of her cooking chicken various ways over the opening credits, backed by Jimi Hendrix’s “Fire.” However, despite this narrative amuse bouche, the rest of the doc adheres to a strictly meat-and-potatoes chronological construction as it works its way through Child’s story, starting with her birth into a wealthy Pasadena family in 1912.

Child and each of her two siblings all grew to be well over six feet tall, prompting her mother to remark memorably that she gave birth to more than 18 feet of children. But apart from her unusual height, it would seem that little marked Child, then known as Julia McWilliams, for greatness during her childhood or, later, as a student at Smith.

The story becomes a bit more spicy when Child gets a job working for the OSS, the forerunner of the CIA, which leads to a posting abroad in the Far East, where she meets Paul Child, a State Department official. The two married in 1946, and onscreen handwritten snippets of their correspondence reveal a love match that flowered through a shared appreciation of food, adventure and sex. By the time they were posted to Paris, and Julia managed to secure a place studying at the famed Cordon Bleu culinary school, the marriage was cooking on every ring, with lunchtime feasts swiftly followed by digestif lovemaking sessions in the bedroom.

The filmmakers choose to illustrate this honeymoon period not just with the aforementioned graphics and oral reportage from assorted interviewees — a selection of old friends, food writers and critics, and the merely opinionated — but with romantically lit footage of someone massaging pastry and assembling a poached-pear tart, the ruby red flesh exposed for all to see.

Once the story reaches the phase of Child’s life when she hosted her own hit TV show, the need to use metaphorical foodstuffs becomes less pressing; there’s such a wealth of archive footage to choose from. One delightful montage features Julia clowning around — albeit in a polite, ladylike way, of course — in her TV kitchen, sometimes making mistakes but never fazed by an accident. Naturally there’s a clip of Dan Aykroyd impersonating her in the 1970s on Saturday Night Live, a skit she reportedly loved, but there’s no quarter given here to any of the rumors that went around at the time of Child hitting the cooking wine between takes.

In fact, the portrait painted of Child as a person and as a professional is so squeaky clean and positive, it’s almost enough to raise suspicions that the film doth protest too much. Passing mention is made, however, of simmering resentments between Child and Simone Beck, a key collaborator on her first book, Mastering the Art of French Cooking, when Julia’s fame took off. Elsewhere, there’s a sense that it was all sweetness, light and rumpy-pumpy between meals for Julia and husband Paul, who effectively ended up becoming Mr. Julia Child, always in the shadow of his literally taller wife. On the whole, the film is as light and frothy as a soufflé, arguably even more so than that airplane-entertainment classic Julie & Julia, Nora Ephron’s semi-fictional tribute to Child.