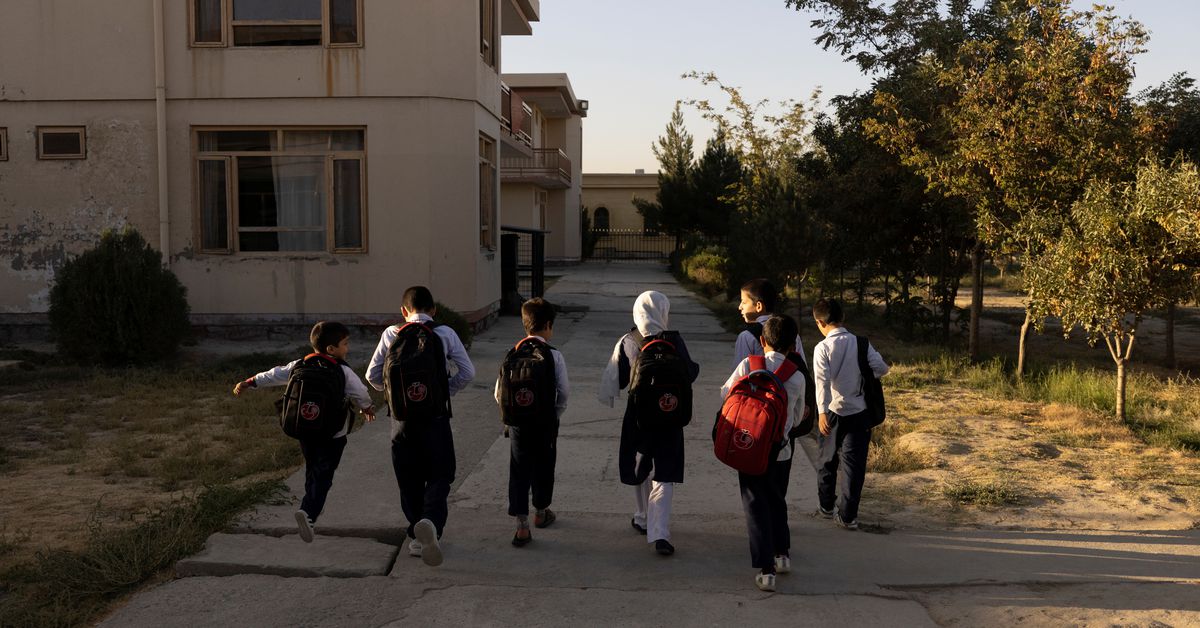 Samira, 9, and other children from the orphanage walk to the school bus in Kabul, Afghanistan, October 12, 2021. Samira wants to be a doctor when she grows up. “I want to serve my homeland and save others from disease, and I also want other girls to study so that they become a doctor like me in the future,” she says with a sheepish grin. Because of her age, Samira is still able to go to school outside the orphanage, and is already taking extra classes in order to get ahead. Hardship has not dented her ambition, but she also recognises that in order to achieve her goals, she may have to go abroad to study. “I am not allowed to study here”. REUTERS/Jorge Silva

KABUL, Oct 15 (Reuters) – Ahmad Khalil Mayan, programme director at a large Kabul orphanage, says he is cutting back on the amount of fruit and meat he gives the children each week because the home is running out of money.

For the last two months, since the Afghan Taliban seized control of the country and millions of dollars in aid suddenly dried up, he has been desperately calling and emailing donors, both foreign and local, who supported him before.

“Unfortunately, most of them have left the country – Afghan donors, foreign donors, embassies. When I call them or email them, no one is answering me,” Mayan, 40, told Reuters at the sprawling Shamsa Children’s Village in the north of the capital.

“We are now trying to run the place with very little money and with little food,” he added.

(Open https://reut.rs/3FOCpLJ in an external browser to see a picture package on Kabul’s struggling orphanage.)

There are around 130 children at the orphanage aged from three years upwards. It has been operational for more than a decade, and provides shelter for those who have lost both parents or just one who cannot afford to keep them.

Among them is nine-year-old Samira, from northeastern Badakhshan province who has been at the orphanage for almost two years after her father died and her mother did not have the means to support her or her brothers.

In the playground outside on a cool day in Kabul she plays with as much intensity as she studies, grinning widely as she goes higher on the swing. Despite her young age, she is already taking extra classes and wants to be a doctor when she grows up.

“I want to serve my homeland and save others from disease, and I also want other girls to study so that they become a doctor like me in the future,” she told Reuters, with a sheepish grin.

Orphanages like this play an outsize role in Afghanistan, where tens of thousands of civilians have been killed in wars that have ravaged the country for more than 40 years.

The lack of funding, which has hit charities, non-governmental organisations and ordinary Afghans since the hardline Islamist Taliban movement took back control of the country, is forcing Mayan into tough choices.

The orphanage tried to send a few children back to relatives who were comparatively well off, but one by one they have returned.

Mayan said staff have had to reduce food portions and limit the types of food children eat.

“Before we were providing them twice a week fruit and twice a week meat, but we cut those items to just once a week or maybe not even (that much).”

Facing an economic crisis as winter approaches, Taliban officials have urged Western governments to resume aid donations and called on the United States to lift a block on more than $9 billion of Afghan central bank reserves held overseas.

Many countries have refused to recognise the Taliban, who until recently were a jihadist insurgency fighting foreign troops and their Afghan allies.

Some governments are demanding that the group guarantees basic civil freedoms, including allowing girls to attend secondary school and women to work.

The Taliban, which banned all girls’ education when they ruled from 1996-2001, have said they are working on the issue.

Compounding the orphanage’s problems is the weekly limit of $200 on bank withdrawals to avoid a run on hard currency, meaning access to funds is not enough to support the children and staff.

Mayan fears that if the situation continues, the orphanage will not be able to function much longer.

That would be devastating for the children, who receive mathematics, English and computer lessons as well as physical education, not to mention food and shelter.

Samira, the aspiring doctor, is still able to go to school outside the orphanage premises because of her age, and she attends extra tuition classes in the afternoon to get ahead.

Hardship has not dented her ambition, but she also recognises that in order to achieve her goals, she may have to go abroad to study.

“I am not allowed to study here.”