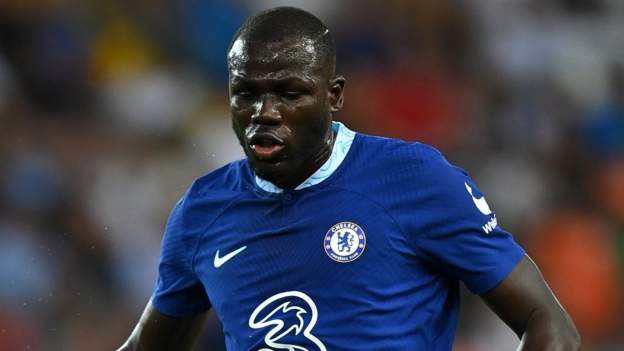 Defender Kalidou Koulibaly says he finally made his Premier League move to join Chelsea because they were “the only club that really wanted me”.

He joined the Blues from Napoli in July after previously being linked with both Manchester clubs and Liverpool.

Koulibaly, 31, revealed former Chelsea boss Antonio Conte first made contact with him in 2016, but said: “I’m not a player who wants to go fighting with the club to leave.”

He spent eight years at Napoli.

Senegal captain Koulibaly said he had been encouraged to join Chelsea after a chat with Blues legend Gianfranco Zola.

He added “friendly pressure” had come too from current Chelsea players, his former Napoli team-mate Jorginho and Senegal goalkeeper Edouard Mendy, and looked forward to competing against the Premier League’s best forwards.

Koulibaly revealed another factor in why he became the second signing of the new Chelsea ownership after Raheem Sterling arrived from Manchester City.

“I think it was because they were the only club that really wanted me to come,” he said.

“We had the first link back in 2016 when Antonio Conte came, they wanted me to come here. It didn’t happen, but I was always linked to Chelsea and this time was the right time.

“The stars were in a good line so I’ve come here and I am very happy to join Chelsea and the Premier League. When I came, I was already home.”

Koulibaly said Napoli’s owner and president Aurelio de Laurentiis should show “respect” to African national teams after dismissing the importance of the African Cup of Nations.

He arrives at Chelsea after the departures of centre-backs Antonio Rudiger and Andreas Christensen, who joined Real Madrid and Barcelona respectively on free transfers.

But Koulibaly said he did not intend to replace Rudiger, but fans needed to be patient with him to show his best.

“I do not want to be the guy who replaced Rudiger, I am Koulibaly,” he added.

“I don’t have the same skills and I don’t play like him. I have another style. I will try to do my best to give solidity to the team. I know it will be difficult for me because I come from Italy, so I have to learn Premier League football and it is very difficult.

“I will have to adapt to everything because the speed is faster. I have to think faster in my head, go faster and move my eyes faster, this is more difficult for players in the Premier League. In Serie A, everything is more with the brain, calmer.

“The most important thing is to have good behaviours to understand everything fast. I will need time for sure because I can’t be the player everyone wants from the first game.

“I will take my time and in two or three months, I will be the one everyone is waiting for.

“So it will be difficult, but I am really motivated and I want to show that Chelsea made the right choice with me.”

While some fans might question whether Koulibaly is arriving at Chelsea in his prime and why they have given him a four-year contract – rare for a player above 30 at the club.

But he added: “I hope I will be here for a long time.”

Koulibaly has already made an impression with fans after he posted a video on social media ringing former Chelsea captain John Terry to see if he could wear his number 26 shirt, which has not been taken up since the ex-England defender left the club in 2017.

Koulibaly admitted he was “nervous” to make the call and said Terry hung up at first because he thought it was a prank.

“In the beginning, [Terry] didn’t believe it was me,” Koulibaly revealed. “He thought it was a joke, so he put down the phone and called the team manager to ask if it was really me.

“When he told me yes, I was really happy because I know what he did for the club, the supporters and the city here.”