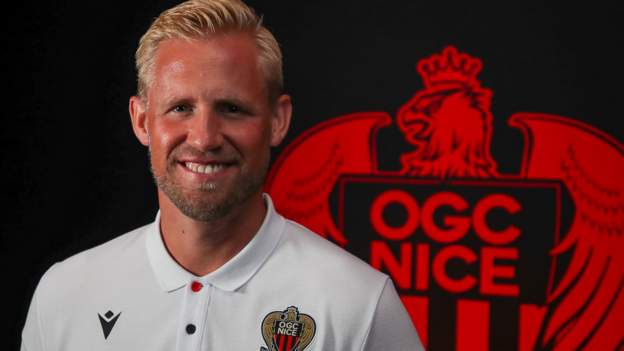 Leicester City captain Kasper Schmeichel has left the club after 11 years and joined Ligue 1 side Nice.

The goalkeeper, 35, made 479 appearances for the Foxes after signing from Leeds, winning the Premier League, FA Cup and Community Shield.

Schmeichel was also part of the side that won the Championship in 2013-14.

He follows Aaron Ramsey to Nice after the Welshman, 31, also joined the French club following the termination of his contract at Juventus.

Schmeichel, capped 84 times by Denmark, had been given permission to leave Leicester.

Leicester chairman Aiyawatt Srivaddhanaprabha said: “Throughout his time with us and particularly as a captain and vice-captain, Kasper has always been a player willing to stand up and take responsibility, leading the team with distinction.

“His influence and his leadership on and off the pitch speak volumes about him as a professional, as a football player and as a human being.

“I know Leicester City supporters share the respect we all have for a player of Kasper’s standing after all his accomplishments as a footballer and captain and will join me in wishing him the very best for the next stage of his career in France.”

Leicester are the only club in Europe’s top five leagues not to have signed a player this summer – and manager Brendan Rodgers admitted they had to manage their finances carefully.

Find all the latest football transfers on our dedicated page.