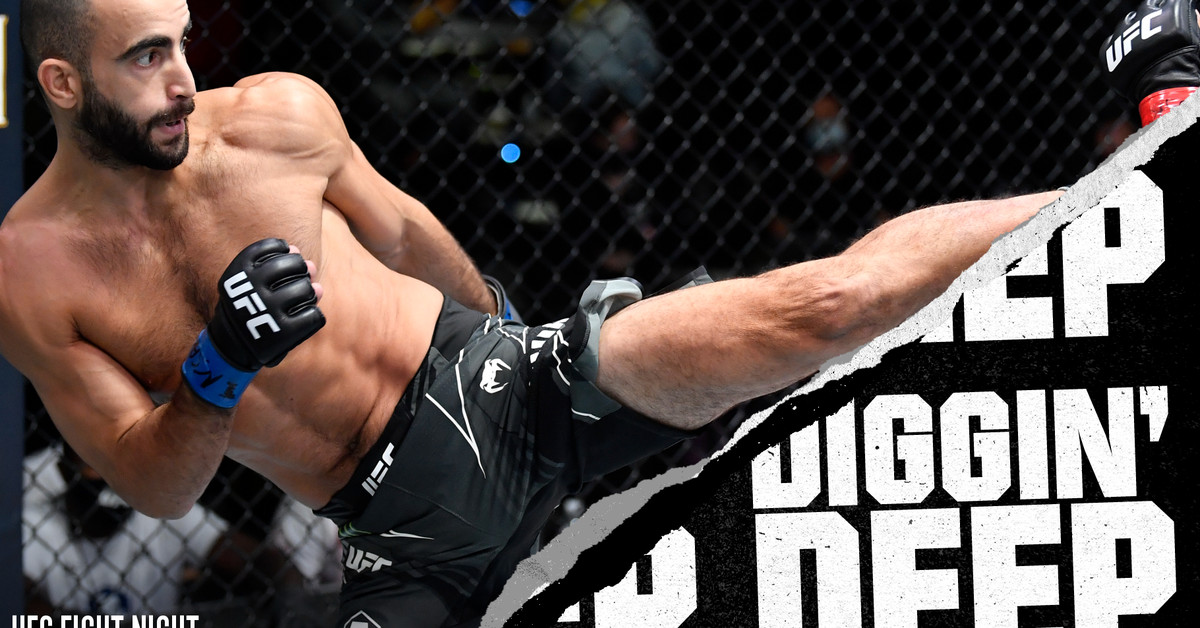 I already mentioned in the prelims preview for UFC Vegas 46 that the card was gutted by injuries, rescheduling of fights, and COVID-19 protocols, but it’s worth mentioning again how badly this card was impacted. There weren’t major names that were removed, but are you telling me I wasn’t looking forward to Michel Pereira and Muslim Salikhov throwing down? You bet your ass I was! Abdul Razak Alhassan and Joaquin Buckley was going to be fun as hell too. Even Kleydson Rodrigues and Zarrukh Adashev looked like it was going to be fun, even if it was about as inconsequential as a UFC fight gets. That’s the flyweight division for ya.

However, the biggest hit this card took was a self-inflicted wound when the UFC decided to jump the gun on announcing who would replace Max Holloway in challenging Alexander Volkanovski for the title. Not that this card should be the UFC’s priority over a PPV headliner, but they could have accentuated both in the process by allowing Giga Chikadze to look at his fight with Calvin Kattar as a ticket to fighting for the title. Alas, it’s still a good fight, but it doesn’t have the oomph it might have had.

While there is plenty of reason to believe this fight is going to be a banger – and I’m of the opinion it will be – there is one giant red flag: Kattar suffered the type of beating at the hands of Holloway last year that can be career changing for the worse. Kattar was smart enough to take plenty of time off following the fight, but think of how Ken Shamrock was after his fight with Don Frye. How about pretty much anyone who fought Robbie Lawler from 2013-16? What’s the point in remembering this type of history if we learn nothing from it?

That said, if Kattar hasn’t suffered any ill-effects, it’s easy to forget what a talented boxer he is given what Holloway did to him. Kattar isn’t a top-notch athlete, but it’s hard to find a more technical striker in the division, complimented by an incredible fight IQ. Many seem to forget Kattar took a few years off to focus on coaching. It isn’t like he can only see things developing from an outsider’s perspective either. Kattar is excellent at taking notes in the midst of his fight and utilizing small adjustments to begin winning the small tactical battles that swing the momentum of a fight. Of course, his taking in that early information has led to slow starts in several contests as well, but he usually makes those reads pay off.

However, much of the same type of positive things could be said about Chikadze. A former kickboxer, Chikadze has a more diverse and explosive attack than Kattar to go with his rock-solid fundamentals. As Chikadze has grown more comfortable with the transition to MMA, he’s been more willing to open up that attack, displaying spinning attacks and launching his kicks to all levels with greater aplomb. If he can land his Giga kick to the liver, it isn’t dissimilar to the lethality of Bas Rutten’s famed liver kicks in terms of its ability to stop fights.

While Chikadze’s seven fight win streak proves he’s a plus-level UFC talent, it doesn’t exactly prove he’s an elite fighter. While his wins over Cub Swanson and Edson Barboza are impressive, he also faced versions of both men that had been through the wringer in their careers and weren’t in their peak form. Plus, there hasn’t been an opponent who has been willing and/or able to test his ground game. Kattar hasn’t made much of an effort himself to take his opponents to the mat since touching down in the UFC, but that doesn’t mean he doesn’t have any wrestling in his back pocket, especially as he begins to get a read on Chikadze. One or two takedowns might be all Kattar needs to start having Chikadze think twice about opening up his arsenal. Hell, Kattar might not even need to secure the takedown; just making the attempts might get Chikadze thinking about them enough to slow down his attack.

There is one other factor that gives Kattar a fantastic opportunity: Chikadze has never gone five rounds. Massive for the featherweight division, Chikadze has faded in the third round in several of his UFC bouts. Kattar has gone the distance in five round contests on multiple occasions, looking solid in terms of his energy levels down the stretch. Would it be a surprise to see Chikadze start out strong, only to fade after the second round? Not in the least.

If I wasn’t so concerned about Kattar coming back from such an extreme beating, I might be inclined to pick him for the upset. He is the better-rounded fighter after all, and smart as hell to boot. However, it isn’t just that Kattar may never be the same physically; his mental state is an even greater question. If there is a mental block, perhaps he can eventually overcome it… but in his first fight back? Kattar is tough as nails on all fronts, but I’ve seen too many fighters fall off a cliff after the type of blood-and-guts fight Kattar endured. Those type of beatings can’t be ignored. It’s possible Kattar handled it correctly by taking time off, but we won’t know until he steps in the cage. Given the growing confidence and momentum of Chikadze, I think he can be the first to put away Kattar with strikes. Chikadze via TKO of RD2

It isn’t hard to see why the UFC is elevating Royval in the manner they are. Not that he’s getting a huge push in comparison to other fighters, but given the UFC has been reluctant to feature flyweights on any main card and Royval is coming off a loss, they’re showing him more respect than most would have guessed.

To be fair, Royval doesn’t know how to be in a boring fight, making a good idea for the UFC to give him a higher degree of shine than they have other flyweights. The former LFA champion fights with a confidence that makes his recklessness more effective than it should be. Not afraid to throw spinning or flying attacks at any moment, the effectiveness can be partially attributed to his opponents frequently being on edge about what he might do next. More than that, Royval’s toughness and ability to effectively operate off his back allows him to whiff on his attacks and not only remain in the fight, but potentially end it should his opponent pursue a finish diving on top of him.

In Bontorin, Royval gets an opponent who is nearly as reckless as he is. In fact, a strong argument could be made Bontorin owns a greater arsenal of physical tools to fall back on, not to mention possessing a greater amount of raw power as the Brazilian has a couple of violent finishes on his resume. Bontorin’s favorite place to fight is in the pocket winging his powerful fists in hopes of either securing a KO or a club and sub of sorts. Bontorin doesn’t get a lot of hype for his ground game, but only Ray Borg has managed to firmly outwork him on the mat. Then again, Borg really outworked him.

There’s no doubt Royval is the feature performer in this contest, but Bontorin isn’t someone he’s guaranteed to walk over. Bontorin is thick for the division and one of the more explosive members of 125. However, while Bontorin’s instincts are solid, Royval’s are on another level. In a contest where both fighters are known for their recklessness, provided their physical tools don’t have a massive gulf between them, I’ll go with the more instinctual fighter any day. Given neither is known for their defensive skills, there’s also a good chance these two can pick up some bonus money. Royval via submission of RD1

Given how Valentina Shevchenko’s pile of victims only continues to get bigger and bigger, it only makes sense to have those victims begin to face off with one another… even if they’ve already done the damn thing.

Chookagian beat Maia the first time they faced off in what was a title eliminator. The stakes aren’t as high this time around, but that doesn’t mean there isn’t anything on the line. Even if it’s a longshot for either one to ever challenge Shevchenko again given the one-sided nature of each of their losses to Shevchenko, the winner would keep alive whatever sliver of hope remains. Of course, there’s always the possibility of Shevchenko losing the belt and reopening the division….

The first contest saw Chookagian use her length and movement to frustrate Maia, outworking the stocky Brazilian with relative ease. It isn’t like there isn’t a great deal of time that has passed since that contest – just over two years – so it’s reasonable to expect a similar result will come to pass this time around: Chookagian landing a plethora of jabs, side kicks, and front kicks to keep Maia at bay and avoid Maia’s power shots. However, there are a few reasons to believe Maia might be able to produce a different result this time around.

Maia has been fighting with more confidence since her loss to Chookagian. Given Maia possesses far more pop in her punches than Chookagian and is a superior submission threat, a confidence boost may be all she needs to find a way to finish the traditionally durable Chookagian. Of course, that’s if she can track down the elusive Chookagian, something she struggled to do the first time around. Even though Maia almost always has an advantage on the mat, she rarely seems to make a strong push to get the fight to the mat. That can be attributed to her being most comfortable fighting on the counter, waiting for her opponent to close the distance on her and firing away with power. In fact, her first contest with Chookagian is a pretty good example of Maia’s struggles moving forward.

I firmly believe this is a winnable fight for Maia. She wouldn’t even need to make major changes from their first fight. Perhaps throw more kicks to the legs of Chookagian as she landed those kicks pretty much at will. I’d recommend utilizing some of her entries as takedown attempts as opposed to looking to land a haymaker every time. Of course, that’s assuming Chookagian doesn’t make any adjustments of her own. While this is a winnable fight for Maia – perhaps even a fight she should win – I don’t think the result will be all that different from the first time around… with Chookagian’s keeyups echoing in the Apex. Chookagian via decision

White: Edwards ‘100%’ next for Usman
Morning Report: Dana White confirms Leon Edwards next for Kamaru Usman: ‘100 percent. He deserves it’