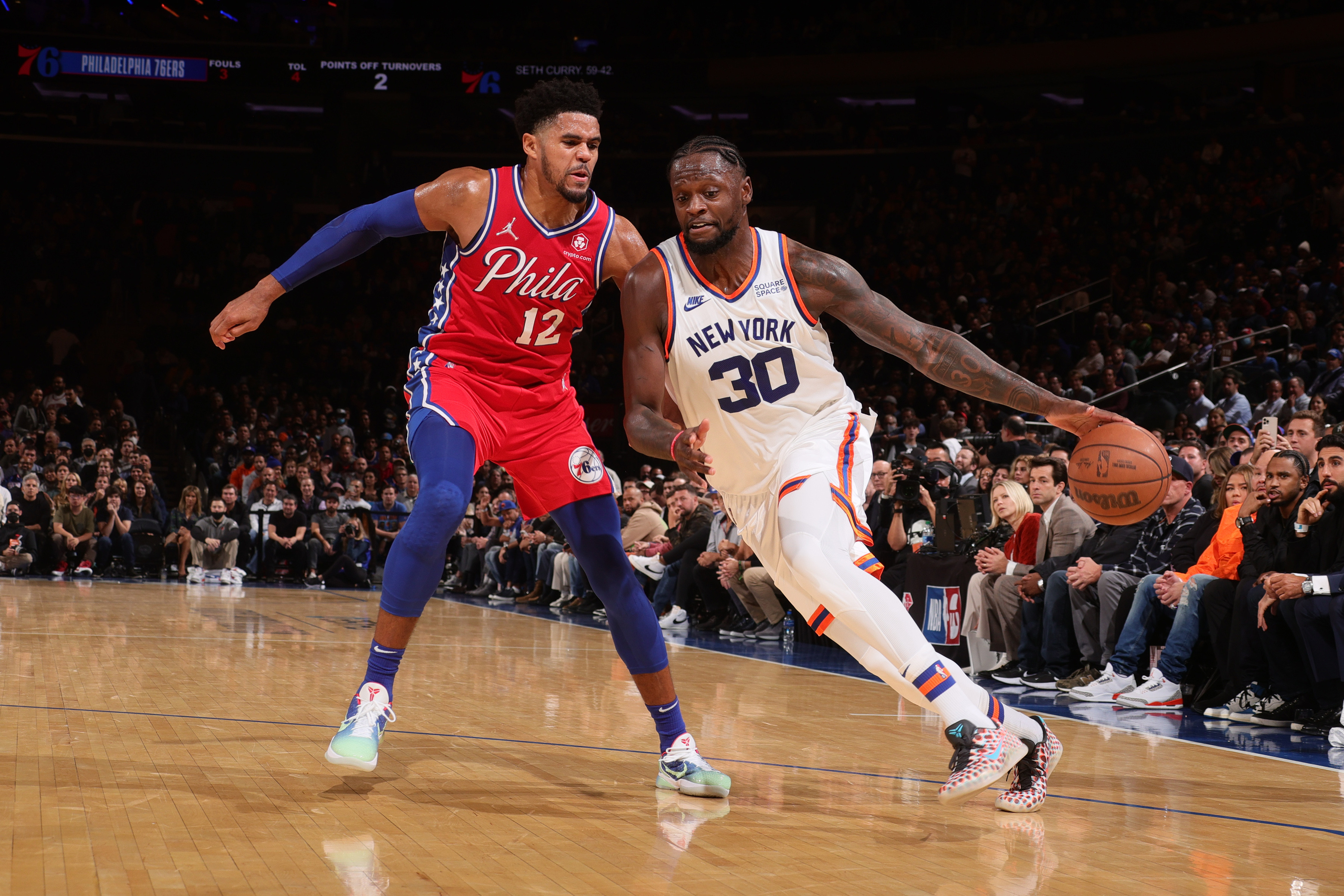 New York snapped its 15-game losing streak against its Eastern Conference rivals with a 112-99 win on Tuesday at Madison Square Garden. Kemba Walker, Julius Randle and Evan Fournier led the way in a balanced effort for the victors, who improved to 3-1 on the season.

Tobias Harris played well in the losing effort for the 76ers, who dropped to 2-2.

The Knicks made the playoffs last season for the first time since the 2012-13 campaign, but 2021-22 is all about taking the next step as true Eastern Conference contenders.

Part of that is battling perceived top teams such as the 76ers, and Thursday was an opportunity to do so in front of a raucous home crowd. And New York wasted little time seizing that opportunity while jumping out to a commanding 20-point halftime lead.

Perhaps the most encouraging part of the quick start was the fact the home team didn’t just rely on Randle, who led the Knicks in scoring in each of the first three games. Instead, Walker found his stroke from deep, while RJ Barrett and Fournier connected from three-point range as well.

Kemba is heating up from downtown 🔥 pic.twitter.com/P0ZGAyg6Y5

The bench was also key, as Derrick Rose, Obi Toppin, Alec Burks and Immanuel Quickley all provided a spark against an overmatched Philadelphia secondary unit.

The onslaught continued in the third quarter with Randle dishing out assists, Toppin powering his way through defenders, and Walker and Fournier maintaining their impressive shooting. Five Knicks scored in double figures in all, which is something that will need to happen if they are going to challenge the top teams in the league.

It also made the fourth something of a formality, which was apparent by the team’s sluggish start to the quarter when it could have removed any doubt.

Still, New York isn’t going to lose many games when it hits 16 three-pointers at a 43.2 percent clip and receives scoring from across the roster. Walker’s showing was particularly noteworthy because the four-time All-Star can be a secondary leader alongside Randle.

The early portion of the 76ers season has been all about which player will step up on a given night and help fill the void left by Ben Simmons.

Joel Embiid was the leading scorer in the first game, Harris was in the second game and Seth Curry was in the third. Curry was particularly impressive while lighting up the Oklahoma City Thunder for 28 points on seven made three-pointers, continuing his red-hot start to the season.

Yet all of that balanced scoring and offensive firepower was nowhere to be found out of the gates in New York.

Korkmaz puts it in reverse for the @sixers 😤 pic.twitter.com/FXr8mbjrBQ

Philadelphia trailed by 20 at halftime and shot an abysmal 2-of-15 from three-point range in the opening two quarters. Embiid also struggled with the Knicks’ physical frontcourt and shot 0-of-5 from the field, although he shot 10 first-half free throws as a result of that defensive approach.

There weren’t many bright spots for the visitors, but Danny Green provided one with his outside shooting in the third quarter. Harris also continued his solid play and contributed on the glass and as a facilitator in addition to his scoring.

If there was a silver lining for the 76ers, it was the fact that the game was relatively even outside of a disastrous second quarter. Cleaning that up is easier said than done, but most games also likely won’t see them outscored 39-16 for an entire quarter.

That was too much to overcome, especially with Embiid struggling to make an offensive impact outside of the free-throw line.

Both teams play Thursday when the 76ers host the Detroit Pistons and the Knicks travel to face the undefeated Chicago Bulls.