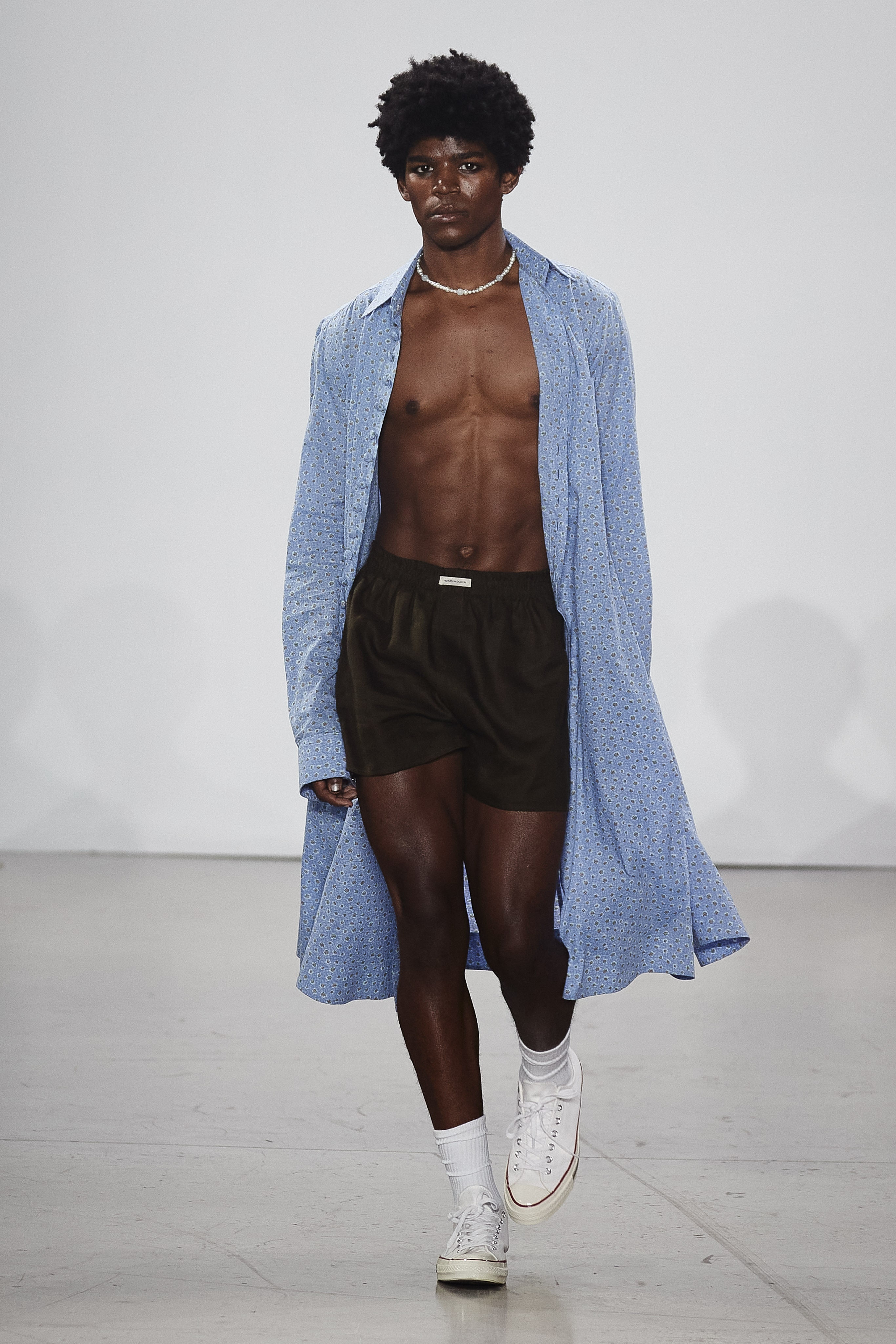 A few years ago, the headlines for Kenneth Nicholson’s spring 2022 collection would have been about dudes in dresses. But in the awakened light of 2021, that sounds clumsily outdated; to assume the gender identities of Nicholson’s models based solely on their appearance wouldn’t just be lazy, it’d be ignorant. Today’s flowery shirtdresses, lacy frocks, and nubby striped sweater tubes instead looked truly genderless; they might have been shown on a few models who identify as males, and some who don’t, but Nicholson made them for everyone.

You couldn’t miss the Kurt Cobain references here; Smells Like Teen Spirit was even on the soundtrack, along with Radiohead and the Foo Fighters, though Nicholson didn’t mention the Nirvana frontman backstage. Marc Jacobs’s Perry Ellis collections from the ’90s came to mind, too. Nicholson was a child of that decade and recalled Calvin Klein’s outsize impact on his youth. He pointed out the silvery CK logo’d lunchbox one model carried as a purse; he remembers coveting it as a kid and finally tracked it down on eBay for this occasion. It was the only real accessory in a collection focused almost entirely on single-piece dressing: Some models wore their dresses over shirts or corduroy trousers, some with a blazer, but the dress was the real takeaway.

Nicholson described the collection as autobiographical and “a different way to emote.” He’s always explored the softer, more graceful side of menswear, typically via crafty touches like crochet or doilies. But this grunge-inspired collection was his boldest experiment yet. Still, the strongest pieces weren’t necessarily the surprising dresses; his peplum-ish vests and sleeveless button-downs with frills at the hips made an impact and should resonate with people of every age, shape, and gender identity.

All of that said, the glossy white walls of Spring Studios didn’t quite gel with Nicholson’s subculture vision. After rushing to his show from Khaite’s in the Lower East Side, it struck me that we should have stayed in that neighborhood. Next season, Nicholson would be better served by a setting that mirrors his progressive tastes.