Kevin Croom explains why he signed with BKFC, pleased with KO win in his debut: “It is a good way to get paid without fighting world-class athletes”

Home /Sports/Kevin Croom explains why he signed with BKFC, pleased with KO win in his debut: “It is a good way to get paid without fighting world-class athletes” 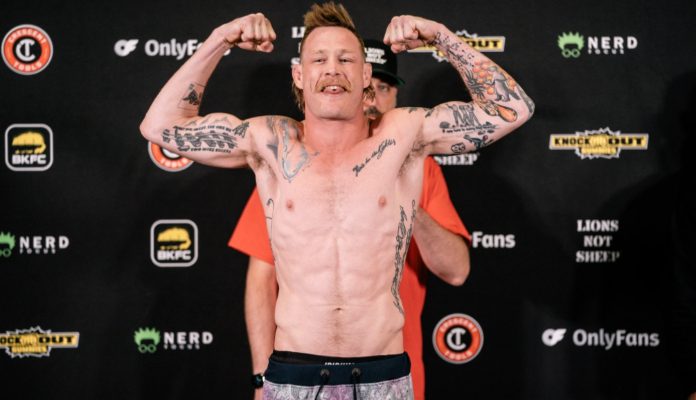 Kevin Croom decided to give BKFC a try after he was released from the UFC.

After Croom lost three fights in a row in the UFC he was released and then fought on the regional scene and picked up a win. After he returned to the win column in MMA, he signed with BKFC which was an easy decision for him.

“To be honest, I feel like it is a good way to get paid without fighting world-class athletes,’ Croom said to BJPENN.com. “I’ve made my career fighting anyone, anywhere, anytime and it hasn’t always worked out the best for my pocketbook. I’m still down for that but I’m going to see if I can make some good money first.”

In his debut at BKFC 33 against Sean Wilson, he said the game plan was to work the body in the clinch. He did just that and it led to a second-round KO win which he was ecstatic about.

“The game plan was to exploit that clinch work. In every fight, I have watched in BKFC, as soon as they clinch they look at the ref to break them up,” Croom said. “Man, the safest spot to hit on the body is the belly. I can hit there as hard as I can without worrying about hurting my hands. I don’t understand why people haven’t exploited that more. So, the game plan was to work on the outside and let him throw big and come in and get to work and I did exactly that.”

Although Kevin Croom had a ton of success in his BKFC debut, it was just a one-fight deal he signed. Yet, he is expecting to re-sign with the promotion.

“This was just a one-fight deal but everyone I have talked to wants me back,” Croom explained.

Even though Croom wants to re-sign with BKFC, he makes it clear he is open to anything. He says he is a prizefighter and will fight in MMA, boxing or BKFC. For him, he just wants the biggest purse.

“I’m a prizefighter, you got a prize I will fight for it. MMA, boxing, BKFC, I’m down to fight anyone, anytime, anywhere,” Croom said. “I do know BKFC has something in Albuquerque in February and I used to live there so fighting there would be cool,” Croom concluded.

What did you make of Kevin Croom’s BKFC debut?

50-year-old Houston Alexander ecastic with TKO win over Joey Beltran at BKFC 33, has no plans of retiring anytime soon: “Even though Father Time is undefeated, it hasn’t gotten me yet”
Prochazka injured, vacates UFC world title