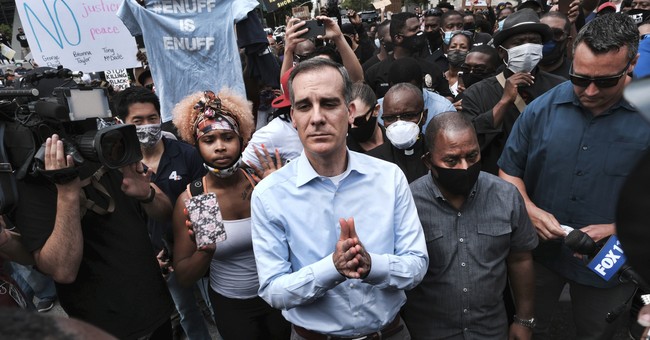 All that time kissing Biden’s backside and ignoring the citizens of Los Angeles may have finally paid off for Los Angeles Mayor Eric Garcetti (D-Skid Row).

Garcetti, 50, is one of several candidates under consideration for the India posting.

Angelenos are obviously not shedding any tears. Many would probably help him pack his bags, including AM 870’s Jennifer Horn, host of “The Morning Answer.”

India’s loss is our gain. Send him yesterday.

Interesting timing though. We Los Angeles RedStaters have decried Garcetti’s nearly eight years of laconic leadership. The rampant homelessness is the biggest open sore, and with a federal judge ruling that all homeless citizens of California must be housed within 60 days, Garcetti would probably relish dumping this gargantuan problem that he helped to create into someone else’s lap.

The order comes in response to a federal lawsuit filed last year by several citizens, business owners, and community leaders who argue officials have failed to address the homeless crisis in Los Angeles, as tents line full city blocks and makeshift shelters cramp under street overpasses.

“Los Angeles has lost its parks, beaches, schools, sidewalks, and highway systems due to the inaction of city and county officials who have left our homeless citizens with no other place to turn,” US District Judge David Carter said in the 110-page brief.

The judge’s filing follows on Los Angeles Mayor Eric Garcetti announcing his budget for the next fiscal year in which he vowed to dedicate $1 billion toward homelessness. In 2020 alone, 1,383 homeless people died, and an estimated five more die each day, according to data from the Los Angeles Homeless Services Authority (LAHSA).

Garcetti’s abysmal handling of the COVID pandemic has also not been forgotten, along with his almost salacious delight in the draconian lockdowns and arrest of Los Angeles residents. Who remembers him saying, “Snitches get rewards” if they rat on their neighbor for breaking any of the COVID guidelines?

Garcetti feigned ignorance over the sexual harassment charges filed against Rick Jacobs, one of his closest advisors. The lawsuit is ongoing, and in a deposition for the suit, Garcetti said that he did not witness inappropriate behavior by Jacobs.

Garcetti spent his first four years as mayor sucking up to then-President Barack Obama to get federal transportation funds, while essentially ignoring the burgeoning homelessness. In Garcetti’s second term, he took every chance he could to campaign for Hillary Clinton in 2016, and then became a surrogate for the Biden campaign in 2020.

Despite Garcetti’s hopes that this brownnosing would be his ticket to a Biden-Harris cabinet appointment, Biden gave Garcetti a hard pass. Garcetti spun it as though it was his decision to finish out his final mayoral term, and that Biden wanted him to serve in some other capacity.

Says there were “things on the table” for him & Biden asked him to serve. He didn’t specify on what?

Guess it’s no longer a private matter. We will see what develops.

Good way to skip out on accountability

It is, and it cannot happen soon enough.