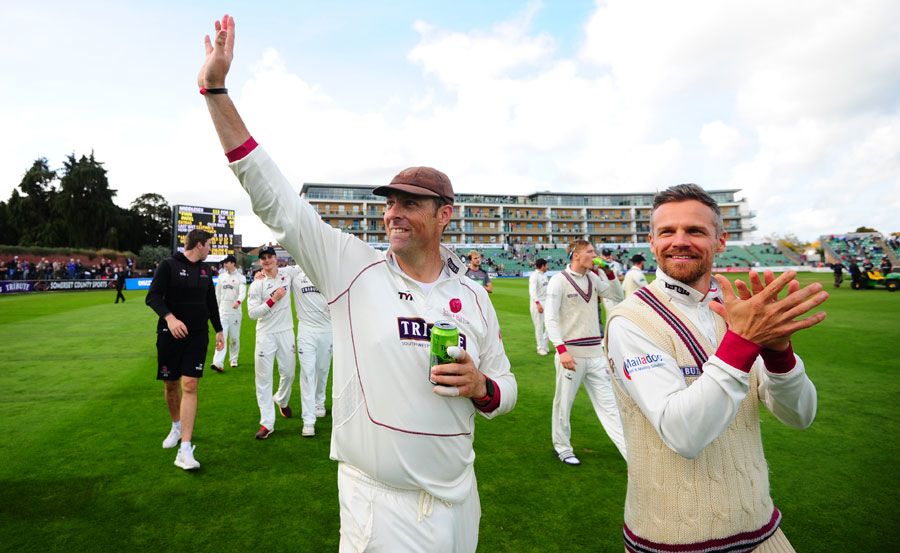 Less than a year after his career was threatened by suggestion that his action was not legal, Leach clinched his fourth five-wicket haul of the campaign to secure his side’s third victory in the final four games of the season. As a result, he passed 50 wickets in the season and Somerset avoided relegation. Matt Maynard, Somerset’s departing director of cricket, said he “couldn’t make sense” of the decision not to take him to the Ashes.

Leach wouldn’t see many pitches like this in Australia, of course. Pitches where spinners open the bowling in three of the four innings and take all 10 wickets in the fourth innings. Somerset have made a point of preparing such surfaces in the last couple of years and, in Leach and Dom Bess, they have two bowlers well equipped to take advantage.

The Somerset players took a lap of honour at the end of the game. It wasn’t so much a sign that they were content with their low position in the table; more a reflection of their relief in retaining their decade-long stay in Division One (no side in the land will have been in the top division so long when the 2018 starts) and gratitude to their 2000 supporters. Cricket still matters in Taunton.

This pitch was marked “below average” by the Cricket Liaison Officer (CLO), Wayne Noon, as it showed signs of “excessive turn” from the start. Crucially he could not see any uneven bounce on days one or two. As a result there will be no points deduction and Somerset’s place in Division One is assured.

That isn’t quite the get out of jail free card it might appear. The ECB regulations state that, should a pitch be marked “below average” twice within a 12-month period in the same competition, penalties can be applied. While Somerset have not had another such mark this season, they will, Noon said “have to be very mindful” of their surfaces in 2018.

There is a slight caveat to all this. Phil Whitticase, a senior CLO, will arrive in Taunton on Friday and conduct a further investigation into the pitch. He will, as part of that investigation, speak to the umpires and the groundsman and it remains theoretically possible that he will increase the penalty. He could also decrease it.

But it would be a major surprise – and an astounding own goal from the ECB – if they should, for the second season in succession, alter the table after the campaign has finished and change the relegation positions. But, not so long ago, it seemed impossible that a hotel magnate with comic hair would become US president; life is full of surprises and not all of them are good.

Adam Voges, the Middlesex captain, was frank in his assessment of the pitch. “We knew we’d get a spinning wicket,” he said. “And I’ve no problem with teams preparing pitches to suit their strengths.

“But we were surprised by how much disturbance there was before a ball was bowled. There was excessive spin from ball one. There were rake marks at both ends. There should be a line and whether that line was crossed is the match-referee’s decision.”

He remains more upset by the two-point deduction for a slow over rate following the crossbow incident at The Oval last month. He feels his team were assured by officials at the time that the nature of the incident would be taken into account and no penalty levelled.

“It was such an extraordinary circumstance,” he said. “We had every intention to rectify our over rate and were assured at the time that it wouldn’t be an issue. Whether there is anything that can be done now is up to the administrators.”

Voges admitted, though, that to leave themselves in a position where they were hurt by such moments was a reflection of their disappointing cricket over the course of the season. Champions in 2016, they end 2017 with rumours of deep dressing-room discontent. They still look a very strong side on paper, though, and might reflect in time that they have simply been victim to a league which relegates a quarter of its participants a season. Over-reaction would probably be an error.

“You look at the season as a whole and it’s obviously been disappointing,” Voges said. “It’s not just the last week or the last month.”

It took less than two hours to wrap-up victory on the final day. Leach and his fellow left-arm spinner, Roelof van der Merwe, utilised the conditions expertly with the latter finishing with career-best figures. Leach, in particular, bowled beautifully with his subtle and wonderfully disguised changes of pace causing many of the problems. And, for all the talk about this pitch, it wouldn’t have raised an eyebrow in Asia. England really don’t play spin very well.

Leach may yet feature in the Ashes. He can expect to be named in the Lions party that will train in Perth as the Test series is played and, should anything befall Moeen Ali, could well be called into the Test squad if required.

“I’d prefer to see him there instead of Mason Crane,” Maynard said. “Crane can’t get into the Hampshire side all the time. I can’t understand it. If he gets called into the team he won’t know anyone there. They’ve missed a trick in not picking him”

One thing is sure: for Leach to recover from the low he was in only a few months ago is testament to impressive resilience. To re-model an action without missing a game and then emerge as a better, more skilful, more mature bowler bodes well for his future.

He had, he admits, some “dark moments” on the Lions tour of the UAE last winter. There were times, as he tried to bowl with his new action, when he feared he might never recapture the bite and consistency of previous days. Just nine months later, he is back to winning games for his side and pushing for an England spot.

“I’ve shown good resilience,” he said. “Something like that can’t be fixed overnight and, from a mental perspective more than technical, there were some dark moments on that tour. I wanted to make a really good impression but it was hard.

“Now I look back on it as part of the journey. I think I’m probably a better bowler now. I can bowl a bit quicker and I’ve learned a lot. About myself and my action. At the start of the season I wasn’t sure if I could keep doing this, so to have finished with more than 50 wickets…. Yes, I’m proud of how I’ve reacted to the challenges. It was tough.”

Leach was one of eight academy products in this Somerset side. Well, academy or equivalent. They didn’t have academies when Marcus Trescothick was growing up. Hell, they didn’t even have the Quantocks. But it means that Maynard’s successor – and it still seems likely that Andy Hurry will be named as such next week with Jason Kerr as his deputy – inherits strong foundations ahead of next season.

“I’d love to have stayed and seen the project through,” Maynard said. “We did have discussions about me doing the head coach role, but decided there could be friction if I didn’t agree with the new director of cricket. So a settlement was agreed and we part very amicably. The club have handled it well.”

The club have undergone quite a transition under Maynard. The over-reliance upon imports has improved and the trust in home-grown youth has improved. And it was his idea that Trescothick, at slip, should field on his knees to the spinners in certain circumstances. “When the ball is dying, we felt he could get that bit lower,” he explained. It wasn’t, perhaps, a perfect stay but the club went within an ace of winning that elusive first Championship title a year ago. Memories in cricket have never been shorter.

It transpires the review of the club structure was led by James Taylor, the England batsman who retired through illness at the start of last season, who felt it was necessary to employ a head coach and director of cricket. Maynard, who described cricket as his passion, will now consider more “backseat” roles such as batting consultancy positions. He is unlikely to be without offers for long.

So, Somerset will play in Division One in 2018. And that means Trescothick could yet fulfil that Championship-winning dream. If he does, it would be a success popular far beyond the borders of the county.

George Dobell is a senior correspondent at ESPNcricinfo