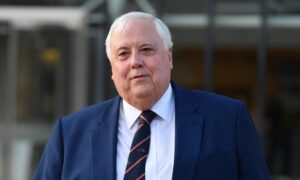 The High Court of Australia has ruled in favour of a Western Australia (WA) law that specifically prevents mining billionaire, Clive Palmer, from suing the state, sparking anger from legal community members.

Palmer’s Mineralogy company had pursued WA for around $30 billion in damages over a 2012 mining dispute. However, due to concerns of overwhelming financial harm, the WA government took two days to enact the “Mineralogy Act”—an unprecedented legislation that effectively terminated any damages Palmer sought, prompting Palmer to escalate the matter to the High Court.

Emeritus professor of law at The University of Queensland, Gabriël Moens, said the outcome went against the fundamental rules of law.

“It’s an abuse of legislative power—there’s no doubt about that,” Moens told The Epoch Times on Oct. 13. “If the government or a parliament adopts a law, a law must be generally applicable—but not used for the purpose of punishing or penalizing a particular person.”

In this instance, WA Attorney-General John Quigley had himself admitted the legislation was “unprecedented,” but had defended the move due to the exceptional circumstance.

But Moens said the High Court’s verdict had effectively resulted in defending the overreaching powers by the WA government.

“This is a monumental victory for all Western Australians,” McGowan said in a Facebook post. “This legislation—now upheld by the highest court in the country—has terminated Mineralogy’s claim for damages against WA.”

McGowan had previously told reporters that the outcome would have left WA bankrupt.

“The potential financial consequences could be dire, absolutely dire,” Mr McGowan said. “A payment to the tune of $30 billion would cripple, cripple the state … we had no choice but to take this course of action to protect every West Australian.”

Quigley outlined the costs would exceed those in the state’s coffers.

However, Palmer argued against the ability of the WA government to formulate laws that prevents citizens from challenging the state.

“They brought in this act of Parliament which is unconstitutional, mainly as a punishment, because I was taking a point of law to the court,” Palmer told 6PR radio.

“You can’t do that. You can’t attack your opponent and your litigant just to try to stop them from exercising their normal rights.”

This is not the first legal challenge between the two figures, with Palmer previously challenging the McGowan government for closing the state’s borders on two occasions. While one has been dismissed, Palmer is currently challenging WA over a border policy that only allows vaccinated to cross.