Leicester 1-0 Liverpool: ‘It was not our plan to give City the chance to run away’

Home /Sports/Leicester 1-0 Liverpool: ‘It was not our plan to give City the chance to run away’ 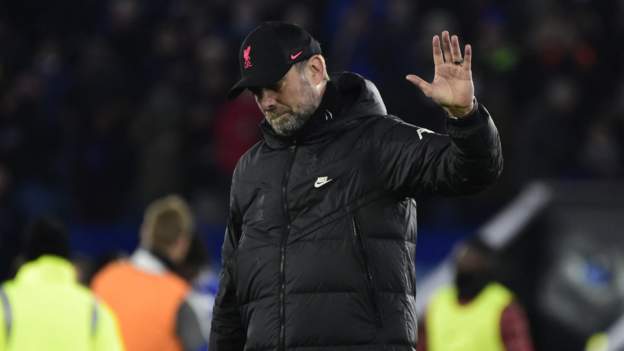 When Jurgen Klopp was asked by BBC Sport if fate had conspired against his Liverpool side in Tuesday’s 1-0 defeat to Leicester, it would have been easy for him to simply reply ‘yes’.

After Mohamed Salah’s saved penalty, countless spurned opportunities and going down to the Foxes’ only shot on target all match – from substitute Ademola Lookman – few would have raised an eyebrow had Klopp put the Reds’ second loss of the season down to luck.

But there was none of that from the German as he faced up to the reality of Liverpool now being six points behind Premier League leaders Manchester City.

“That’s a nice view – but I didn’t like our performance,” said Klopp.

“So often these boys give me a chance to say ‘wow’ what a game. Tonight it’s ‘wow’, but in completely the other way. It didn’t look good.”

This was Liverpool’s first league game without scoring in 29 outings and, with champions City and Chelsea in action on Wednesday, the Reds could end 2021 nine points off top and in third place.

How big a blow could this defeat prove?

‘Everyone has to look in the mirror and improve’

Liverpool’s next game is at Chelsea on Sunday.

“It’s a big gap,” Klopp added. “To top that, Chelsea and us play against each other. It was not our plan to give City the chance to run away. If we play like tonight we cannot think about catching up with City.

“If we play our football and we can win games, we can see how many points we can get and what that means.

“I don’t have a proper explanation for tonight – to find it is my main concern, not City.

“It didn’t look like us, and that’s obviously the one thing we have to think about and change immediately. We have to learn and we will.”

Reds defender Virgil van Dijk told Amazon Prime: “Everyone has to look in the mirror and improve.

“We’re in December. The season is so, so long. Anything can happen.

“You have seen it with Covid and injuries – lots of things can change. There’s no point looking at [Manchester] City or Chelsea or the other teams around us. We should look at our performance today and improve.”

‘Manchester City can wrap the title up from here’

Former Reds midfielder Don Hutchison was watching the game for BBC Radio 5 Live and says it is “too big a call to say they are out of the title race”.

He added: “Are Man City going to win every game? No. But it puts an awful lot of pressure on Liverpool. This could be crucial, it would halt all their momentum.

“They have missed so many chances, Jurgen Klopp will be bereft. It’s a body blow for Klopp.”

But ex-Republic of Ireland striker Clinton Morrison said: “This is a big result. I think Man City can wrap this title up from here. The way Man City are playing is ridiculous, I don’t see them losing a game.”

The Reds also have to deal with missing two of their first-choice frontline, with Salah and Sadio Mane – plus midfielder Naby Keita – going to the Africa Cup of Nations after Sunday’s game at Stamford Bridge.

They could be gone for more than a month if their nations go all the way.

Former Tottenham midfielder Andy Reid said: “There will be a big reliance on Roberto Firmino. One or two will have to step up to the plate -Liverpool will definitely need them.

“They’re probably the team affected the most with the quality and stature of players that are going away, losing two thirds of the front three. They are ones you rely on for goals.

“You hope, for Liverpool, it doesn’t have too much of a concern for the title race – and give them too much to claw back.”