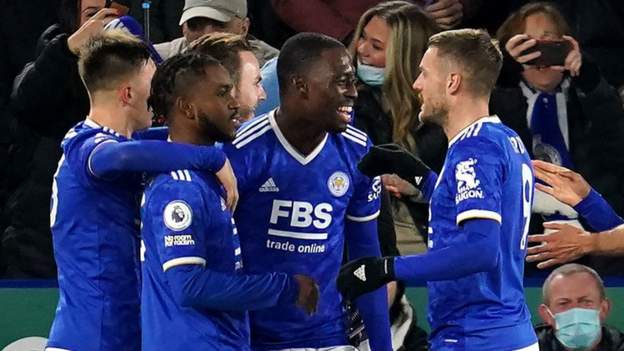 Ademola Lookman scored the only goal as Leicester beat Liverpool to leave the Reds six points off the top of the Premier League table.

Liverpool’s biggest chances came in the first half when Mohamed Salah had a 15th-minute penalty saved by Kasper Schmeichel and headed the rebound off the bar.

Sadio Mane then missed a couple of opportunities for Jurgen Klopp’s side before they were made to pay by the hosts in the 59th minute.

Former Everton forward Lookman, with only his fourth touch after coming on, took Kiernan Dewsbury-Hall’s pass in his stride, beat Joel Matip and rifled a shot past Alisson – Leicester’s only shot on target.

Leicester, missing several first-team players, hung on despite relentless late Liverpool pressure – just six days after blowing a 3-1 lead to lose on penalties against the same opposition in the Carabao Cup quarter-finals.

With only their second defeat of the season, Liverpool are now six points behind leaders Manchester City, while Leicester – who have won just two games out of seven – move up to ninth.

The Reds could also end 2021 in third place and nine points off top spot if Pep Guardiola’s City beat Brentford, and Chelsea at least draw with Brighton, on Wednesday.

Goals seemed to be practically guaranteed in this one. Liverpool had scored a club record 50 in their opening 18 league games.

Leicester had netted 12 and let in another dozen in their last four games, including the 3-3 cup draw at Anfield and a 6-3 defeat by Manchester City on Boxing Day.

Injury problems for the Foxes meant Wilfred Ndidi returned from a hamstring problem to start at centre-back.

He fouled Salah for the penalty which everybody expected to produce the opener.

But Schmeichel guessed right as the Reds failed from the spot for the first time in the Premier League in more than four years.

Salah should also have netted the rebound too with Schmeichel on the ground, but his looping header in front of an empty net hit the crossbar.

The Reds had a host of half-chances, with Jordan Henderson half-volleying off target on three occasions in the opening period.

Schmeichel then did well to keep out Alex Oxlade-Chamberlain’s overhit cross and Salah’s first-time effort – with Mane missing a couple of good chances too.

Vardy caused the visitors problems – but substitute Lookman’s goal three minutes after coming on was their only shot on target.

In their thrilling cup clash, Liverpool came from two goals down to break the Foxes’ hearts with a 95th-minute equaliser, but this time the hosts held their nerve.

Liverpool kept pushing until the end with Diogo Jota heading wide and Schmeichel saving a Virgil van Dijk shot with his feet.

This was their first league game without scoring in 29 outings and makes Sunday’s trip to Chelsea – the last before Salah, Mane and Naby Keita go to the Africa Cup of Nations – almost a must-win meeting.