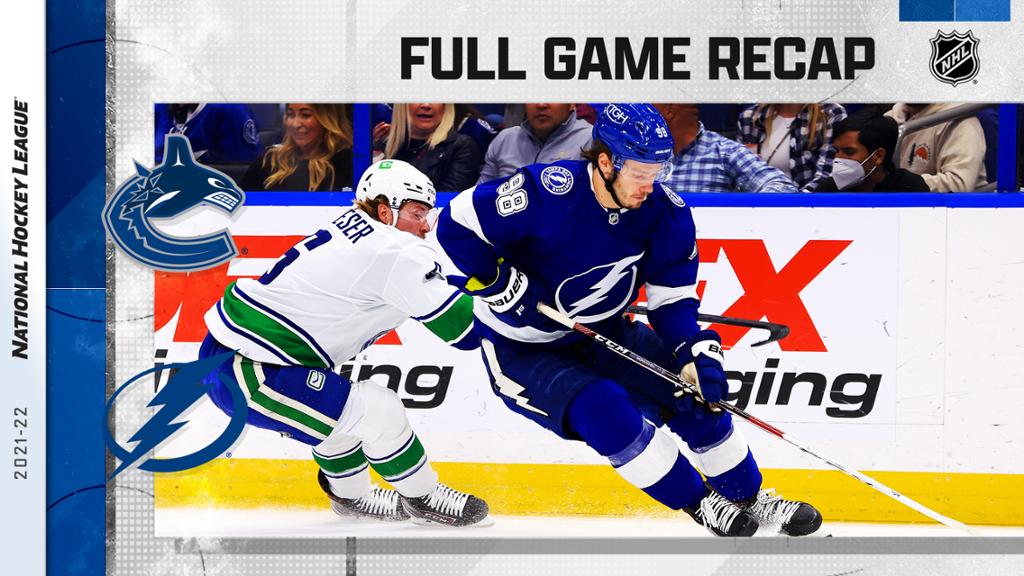 TAMPA — The Vancouver Canucks lost consecutive games for the first time under coach Bruce Boudreau, 4-2 to the Tampa Bay Lightning at Amalie Arena on Thursday.

Tyler Motte and Matthew Highmore each had a goal and an assist for the Canucks (16-17-3), who won their first eight games with Boudreau before losing three of the past four, including 5-2 at the Florida Panthers on Tuesday. Thatcher Demko made 17 saves.

The Canucks were 0-for-4 on the power play after going 0-for-3 against the Panthers.

“I liked the compete, I thought it was much better than the other night for sure,” Boudreau said. “Anytime you can hold that team to 21 shots … I don’t know what the chances were, but I know they didn’t have a lot of them.

“At the same time, we had opportunities, we had four power plays and we don’t get anything. That’s my fault for putting the same guys back out there all the time.”

Four players scored for the Lightning (25-9-5), who have won four of five. Andrei Vasilevskiy made 24 saves.

“At the end of the day I think they were the better team tonight,” Tampa Bay center Pierre-Edouard Bellemare said. “We found a way to win the game, but you have to give credit where it’s due.”

Steven Stamkos gave the Lightning a 1-0 lead with a power-play goal at 3:16 of the first period, a one-timer from the left circle off a pass from Victor Hedman.

“It’s not just the goals, obviously we all know [Stamkos] can shoot the puck and he can score big scores,” Bellemare said. “But he’s been huge for us on the [penalty kill]. He’s been winning those face-offs that we lefties have a hard time winning on the right side.”

Anthony Cirelli put the Lightning ahead 2-1 at 19:39 with a backhand from the low slot off a pass from Alex Killorn.

Boris Katchouk extended the lead to 3-1 at 11:24 of the third period when he finished a 2-on-0 off a pass from Ross Colton. It was his second goal in 29 games.

“I know Ross, I mean we’ve played with each other for a long time,” Katchouk said. “I knew he was coming back and all I had to do was try to put it in the net.”

Motte made it 3-2 at 15:46 when he went between his legs and lifted a shot over Vasilevskiy from close range.

“Obviously that’s a skilled play,” Highmore said. “Didn’t really see it coming, but from our end that was a really nice goal that got us back in the game.”

“I wasn’t completely happy with a lot of the things we did,” Lightning coach Jon Cooper said. “Am I happy with the result? There’s no question, and I will never frown at that. But I think we made the game harder on ourselves. We recovered well in a lot of situations but we played with fire a little bit.”

NOTES: Canucks defenseman Luke Schenn received his Stanley Cup ring before the game. Schenn scored four points (two goals, two assists) in 38 regular-season games for the Lightning and one goal in eight Stanley Cup Playoff games. … Stamkos scored power-play goal No. 173 to tie Ray Bourque and Jean Beliveau for 30th in NHL history. … Lightning defenseman Erik Cernak took a shot off his ankle late in the third period. Cooper did not have an update on the injury. … Demko, Hedman and Vasilevskiy were named to the 2022 Honda NHL All-Star Game.