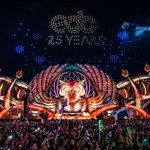 Indeed, after a 17-month hiatus due to the pandemic, EDC roared back into town with its thumping bass, groovy trance and many other varieties of dance and electronic music. The festival has come a long way since it first moved to the desert from Los Angeles in 2011 — with classic moments like the 2012 evacuation of the festival due to a windstorm, or the Red Bull Sky Dive team floating into the fest, or when Bryan Cranston appeared during Above & Beyond’s 2015 set as his his infamous character Walter White — commemorated throughout the weekend.

Of course, many new memories were made as well. Here are 10 standout moments from the weekend.

The theme for 2021 was kineticZEN, a great idea considering the kind of year many of us had in 2020. This theme played out in a big way at EDC’s always massive kineticFIELD stage, the reveal of which is a highlight of the event each year. For kineticZEN, the Insomniac owl on the stage was nestled in a lotus blossom guarded by two statuesque deities. The Marquee nightclub Sky Deck — a partnership with the Strip’s Marquee nightclub that hosts many EDC VIPs — riffed on the theme with a Balinese design and a grotto for photo opps. Meanwhile, a nightly drone show highlighted some of kineticFIELD’s stage designs from over the years.

Big-Name Sponsors Were Back

While major brands may have shied away in the early days of EDC, now everyone is competing for naming rights. Allegiant Travel — the same company that bought the naming rights to Vegas’ recently opened Allegiant Stadium — had its name all over the the “Rave Terminal.” Meanwhile cryptocurrency exchange platform Coinbase claimed the “Pixel Forest” and Verizon had its own viewing decks.

The Reign of Alison Wonderland

In 2016, Alison Wonderland made history as one of the first two women to play a solo set on the EDC mainstage. (Anna Lunoe also played solo on this same stage in 2016.) Five years later, Alison Wonderland persisted as a major force at EDC with a set that was one of the weekend’s most talked about. Her Friday night performance on the Circuit Grounds stage was everything EDC is known for, with a writhing mass of humanity moving to the huge sounds while fireworks lit the sky above them. Wonderland’s visuals featured feature film style clips with fan commentary, and when the Australian producer’s mixer broke during the set, she fixed it herself and then kept right on playing. That night around 3 a.m., she also jumped on the Parliament art car for a house-only pop-up set.

In addition to the more than 200 DJs playing the show, EDC hosted a bevy of celebs, including Mike Tyson, who hung out with Insomniac Founder and CEO Pasquale Rotella. Pauly Shore showed up at the Marquee Sky Deck, as did Drew Carey, while Brody Jenner arrived by helicopter and played guest bartender, serving his hard seltzer line Mamitas. And only in Las Vegas: Tao Group, which owns Marquee, bused in 200 models to pass out Tao restaurant bento boxes to hungry ravers.

While EDC hours are typically billed as “dusk ’til dawn,” that tagline was slightly less accurate this year, given the event’s postponement from May to October. This time, EDC’s standard hours — 6 p.m.-6 a.m. — meant that the event started just after sunset and that the sun didn’t fully rise until about an hour after the show ended each morning. The calendar shift also meant cooler temperatures, with the event’s typically warm May nights being traded for early morning temperatures that dipped into the high 50s. This fall weather meant that the typically scantily clad EDC crowd (think pasties, tutus and not a whole lot else) instead opted for faux fur coats and, in more DIY sartorial choices, emergency mylar thermal blankets worn as capes.

EDC in the COVID Era

With EDC having been postponed from May to October due to shifting protocols around the pandemic, safety was top of mind given the massive crowd. Attendees were advised to bring either a copy of their vaccination card, a digital vaccine record or negative test results, although one report from the general admission area noted that no one on the security staff asked to see any of this information upon entry. (A test result was, however, requested upon entering the VIP Skydeck area.) We also witnessed very little masking, perhaps an irony given that masks are a typical fashion staple at any given EDC.

Billed as the only artist to have played all 10 years of EDC Las Vegas, the dance scene veteran took the kineticFIELD stage on Saturday night to play hits including “Split” and “The Business.”

Camp EDC is the festival’s camping area located in the parking lot of the Motor Speedway, and it’s grown in popularity since its 2018 debut, offering amenities like goat yoga, kandi making, a pool and daytime parties. Divided into tents and an RV area, there were some complaints over the weekend as this year tents were not outfitted with air conditioning units, as they have been in years past. Those that filed a complaint with Insomniac were notified that air conditioning wasn’t offered due to the fact that cooler October temperatures did not necessitate it. On Thursday, a broken water pipe also caused some issues at Camp EDC, although water services were restored before the end of the day.

This year, Lil Nas X appeared onstage with Diplo to perform “Industry Baby,” “Montero” and “Old Town Road,” while The Kid LAROI popped up during DJ Snake’s set to do “Stay.” Diplo in fact played three times over the weekend, including an unannounced set appearance on the Forest House art car. Illenium, who wasn’t on the lineup at all, also turned up for a surprise set on this same art car.

Legal Weed, or at Least Advertisements for It

While it’s legal to possess up to an ounce of marijuana for personal use in Las Vegas, the law dictates that use of cannabis is only legal on private property. But while cannabis wasn’t legally allowed at EDC, that didn’t stop the consumption or promotion of it, with a giant blunt art installation advertising Insomniac’s recently launched cannabis strain, RNBW.