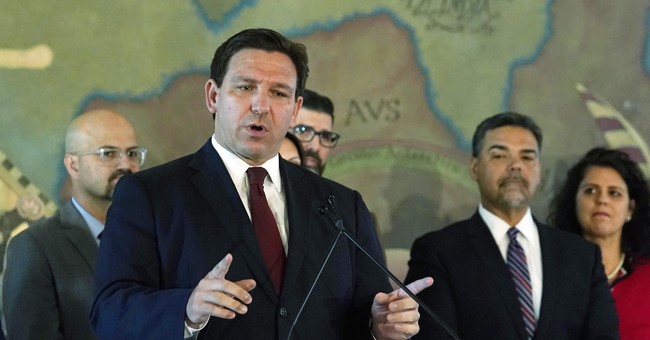 The Lincoln Project has shown once again that it isn’t very good at this whole politics thing. After helping Virginia Gov. Glenn Youngkin win the election last year with one of their failed stunts, it appears they still haven’t learned their lesson. But this time, they managed to loop Florida gubernatorial candidate Nikki Fried into their hijinks.

In a now-deleted tweet, the Lincoln Project posted an image of an email that was supposedly sent to supporters of Florida Gov. Ron DeSantis implying that he is planning to seek the GOP presidential nomination in 2024. “If I were to run for President will you support me?” the email read.

In 2018 they underestimated me as I ran for Governor of Florida (AND WON), but now, they have seen exactly how powerful the Keep Florida Free movement is.

After Faucian decrees shuttered the American economy, forcing citizens to be locked down and under heavy-handed mandates, Florida paved the way for other states to reopen. Without the Sunshine State’s first step in the right direction, who know where we’d be.

The message goes on to state that DeSantis has “an uphill battle” and that his opponents are “going to use every tool in their war chest to take me down and do away with our freedom agenda.”

In its tweet, the Lincoln Project tagged Donald Trump Jr. and wrote: “Hey, @DonaldJTrumpJr, did you get Ron DeSantis’ latest email? You gonna support him for President?”

While former President Donald Trump has not yet indicated whether he plans to run for the presidency again, many have speculated that he would be throwing his hat into the ring. This would possibly make for a contentious relationship between Trump and DeSantis, who has also been coy about his presidential aspirations.

Nikki Fried, who is running a quixotical campaign to unseat DeSantis as governor, shared the Lincoln Project’s tweet.

But there was one problem: The email is about as real as the attack on Jussie Smollett.

In response to the Lincoln Project’s tweet, David Abrams, who works on DeSantis’ campaign, said the email “is as fake as it gets.”

He later apologized and deleted the tweet after the deception was revealed.

fyi was made aware i tweeted a scam email. Deleted the tweet. Apologies.

However, Pushaw wasn’t satisfied with the correction, and asked where the fake email originated. She wrote:

Sharing this tweet here for transparency 😇Now… want to tell us where this “scam email” came from?

As of this writing, the original author of the sham email has not been revealed. But the fact that neither the Lincoln Project nor Fried’s campaign ever bothered to verify its veracity is telling. They were rather gung-ho about splashing the fake message all over their Twitter pages–regardless of whether it was true. Perhaps it was just too good to resist the temptation?

Biden Descends Into More Confusion and What He Says Will Infuriate Parents
New Trump ‘Scandal’ Just Dropped, and It May Be the Most Asinine Yet