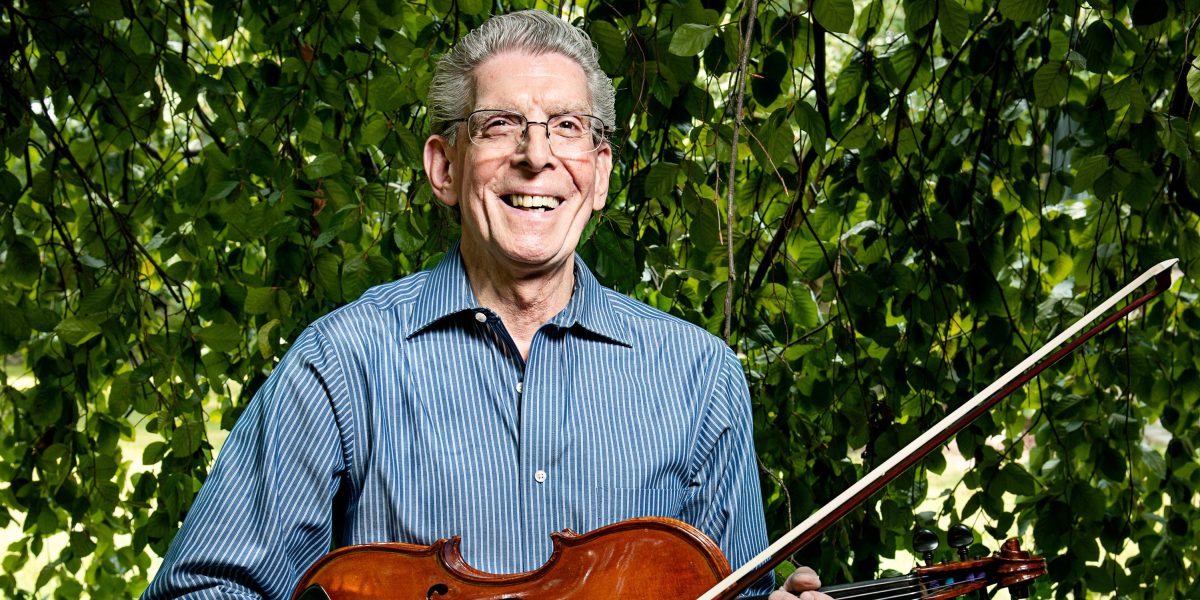 He had spent two years teaching a basic course on semiconductor physics and circuits in MIT’s Department of Electrical Engineering and Computer Science, learning the material in the fast-moving field as he went along. That didn’t leave him any time for research. Then a golden opportunity arose.

With the help of the late Irving London, founder of the Harvard-MIT Program in Health Sciences and Technology, Grodzinsky won a sabbatical at Boston Children’s Hospital under the mentorship of the late Mel Glimcher, chief of orthopedic surgery and a pioneering researcher on the biology of human bones and collagen.

Glimcher wanted to start a research project on cartilage, the tough matrix of fibers that lines the joints, and on osteoarthritis, the chronic, painful disease that breaks that cartilage down.

It was a perfect fit for the 29-year-old Grodzinsky, who had earned his ScD studying the electrical properties of collagen, one of the constituents of cartilage. By year’s end, he was on the path he has followed ever since: trying to find effective treatments for osteoarthritis, the leading cause of chronic pain and disability around the world. It affects more than 30 million Americans, and hundreds of millions globally.

“It’s a huge financial burden and disability burden. And while it’s not fatal, it certainly contributes to loss of quality of life,” says Joseph Buckwalter, an orthopedic surgeon and osteoarthritis expert based in Iowa, who has known Grodzinsky for decades. “The costs of total joint replacements, mainly knees and hips, is one of our major health expenditures.”

No plan for pain

The US Food and Drug Administration has not approved any disease-modifying medications for osteoarthritis—drugs that treat the underlying condition rather than just the symptoms. The most sufferers can hope for, Grodzinsky says, are pain relievers like Motrin, occasional injections of steroids, and eventually joint replacement surgery. More than a million knee and hip replacements are done in the US each year, and the number is expected to soar as the population ages.

While older people are most susceptible to osteoarthritis, Grodzinsky has focused much of his research on younger people, particularly female athletes, who often develop the condition after knee injuries.

Tens of thousands of young women suffer injuries to the anterior cruciate ligaments of their knees each year. “When I teach my course at MIT related to biomechanics,” Grodzinsky says, “I ask about ACL injuries, and just as many hands go up today as in the past. I taught a Harvard Medical School course recently, and of the 20 students in the class, four women had suffered ACL tears, and one was on her third surgery.”

Doctors can fix these tears, he says, but both men and women who suffer joint injuries are still at high risk of developing osteoarthritis in subsequent years. And while knee replacements can counteract the effects of osteoarthritis, doctors are reluctant to perform such surgery on younger people because it will probably need to be repeated after the first artificial joint wears out.

A knee implant can last years, says Buckwalter, but “I would have nightmares doing it in someone under 40, because the odds are almost overwhelming that they’ll need another one.”

Researchers have identified existing drugs that might alleviate the onset of osteoarthritis, but they are hampered by the fact that cartilage does not have a natural blood supply, Grodzinsky says. When doctors inject a steroid in the knee joint to reduce inflammation, the body clears most of the medication before it can get into the cartilage.

To tackle this problem, his lab has pioneered research involving nanoparticles, human cadaver knees, and even missions to the International Space Station.

Starting with that sabbatical more than four decades ago, Grodzinsky learned a vital fact about cartilage. While the tissue fibers themselves provide some of the support for our joints, much of its strength comes from its electrostatic properties. “It turns out about half the compressive mechanical stiffness of our cartilage is due to electrostatic repulsive interactions between negatively charged sugar chains,” he says.

This negatively charged tissue matrix also offers a way to deliver drugs directly into the tissue: by loading them into positively charged nanoparticles. Grodzinsky’s team has been able to show in human cadaver knee cartilage that such particles can counteract the early inflammation and damage caused by injuries.

The initial nanoparticle work was started several years ago by Grodzinsky’s former doctoral student Ambika Bajpayee, MNG ’07, PhD ’15, now a professor at Northeastern University. Bajpayee then collaborated with Paula Hammond, head of MIT’s chemical engineering department, who had pioneered the use of nanoparticles to deliver drugs to cancerous tumors.

In the Grodzinsky lab, the drug-­containing nanoparticles are injected into animals’ joints, just as they would be in human patients, he says, and “once they’re inside, if they’re used at the right concentration, they can stay inside for many weeks,” nestled in the fibrous matrix.

The group has concentrated on delivering two medications that are already approved for human use.

One is the anti-inflammatory dexamethasone, which also has been used successfully to treat breathing problems in some hospitalized covid-19 patients. The other is insulin-like growth factor 1 (IGF-1), a hormone that promotes growth of bone and cartilage tissue and has been used in children born smaller than normal.

The dexamethasone lessens the breakdown of cartilage after an injury, Grodzinsky says, while IGF-1 can promote tissue repair.

Animal studies using IGF-1 have been done in a collaboration with Hammond, and Grodzinsky’s lab has extended this experimental treatment to human tissues as well, relying on samples from dead people. So far, the lab has been able to obtain pieces of knee bone, cartilage, and synovial joint capsule from 45 donors, says Garima Dwivedi, a postdoctoral researcher in the lab.

Dwivedi and her colleagues put the samples in wells built into plastic plates and keep them metabolically active. Then they apply a mechanical impact that mimics what happens in a knee injury. That releases inflammatory molecules known as cytokines and begins a process similar to what happens in osteoarthritis.

In this work, the researchers put the nanoparticles in the culture medium that bathes the tissue samples—a technique they could also use in future experiments on the space station, which has become a magnet for researchers studying diseases of aging.

Scientists have known for years that human tissues age more quickly in low Earth orbit than on Earth, though the reasons are somewhat mysterious. One analysis estimated that astronauts’ muscles and bones atrophy 10 times faster in microgravity.

With funding from the NIH and NASA, Grodzinsky’s lab sent samples of knee cartilage-bone plugs and synovium tissues to the ISS in 2019 and 2020. They hoped to determine whether osteoarthritis-like disease could be initiated “in a dish” to simulate what happens in humans after a knee injury—using the microgravity environment to explore and eliminate the mechanical processes at work—and to try treating it with dexamethasone and IGF-1.

Preliminary results have been encouraging, he says. On the most recent trip to the ISS, the lab found that both drugs reduced damage in the many of the cartilage samples.

“Since most researchers these days stress that there will not likely be a single magic bullet, we believe the ability to test combinations of drugs in vitro is an important step forward,” Grodzinsky says.

The work in microgravity may also pay dividends for future space missions, Dwivedi says. Astronauts, who exercise intensively in space to counteract the atrophy that muscles and bones tend to suffer in weightless conditions, are three times more likely to get impact injuries than people on Earth, she says, so figuring out how to repair joint damage may be crucial for future long-term space missions.

Grodzinsky always seemed destined to find a home at MIT.

Growing up on Long Island, where he attended public schools in the booming postwar suburb of East Meadow, he sometimes visited his older brother, Stephen Grodzinsky ’65, SM ’67, at Burton House. He remembers thinking, “This looks great to me.”

He went on to get his ScD under the late James Melcher, director of the school’s Laboratory for Electromagnetic and Electronic Systems. But soon a recession hit, and the only positions he was offered were a postdoc in icy Saskatchewan and an assistant professorship in music and engineering in Brazil. His mentors—including Ioannis Yannas, best known for inventing artificial skin—encouraged him to stick around, offering him a teaching position in electrical engineering. He has been at the Institute ever since.

In 1995, MIT set up the Center for Biomedical Engineering to advance research in what was then a new field. Three years later, Grodzinsky was named to his current post as its director. At that time, his faculty affiliation changed to the newly formed Department of Biological Engineering, with joint appointments in EECS and mechanical engineering.

Grodzinsky believes any research success he has achieved has been the direct result of the “tremendous PhD students and postdocs we were able to get at MIT.” They in turn have prospered under his compassionate mentorship.

“It has been a pleasure to work with him, primarily because he gives you a lot of independence for your own ideas to develop,” says postdoc Dwivedi. “And no matter who you are and what stage of career you’re in, he listens to you with utmost attention and respect.”

She also appreciates his personal support. When her parents in India contracted covid in April, he “gave me completely free time to help take care of them,” she says.

Grodzinsky himself has managed to avoid osteoarthritis, even though, at age 74, he is in a prime risk category for the disease.

Maybe, he muses, it’s because his avocation as a musician has kept him limber. After years of piano lessons at the Third Street Music School Settlement in New York, he became the principal violist of the MIT Symphony Orchestra as an undergraduate. He also played in freelance string quartets after finishing his ScD and met his wife, Gail, playing chamber music.

After officially setting foot on campus as a student at age 18, he says with a smile, “somehow, I’ve never been able to find a way to leave.”