Lucille Clifton and the Task of Remembering

Home /General/Lucille Clifton and the Task of Remembering 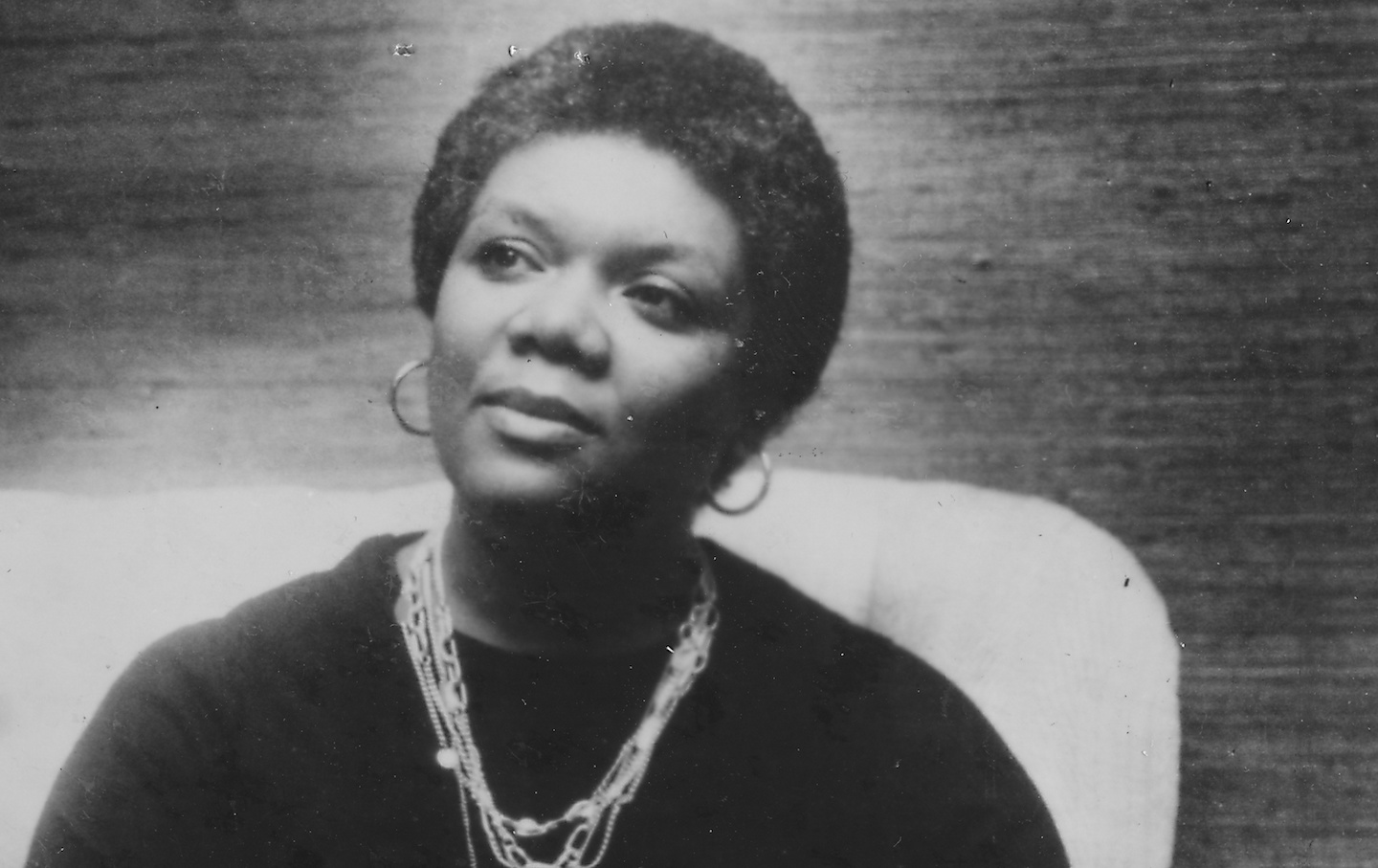 Lucille Clifton’s poetry has seeped into the public consciousness. These days I can’t open Instagram without seeing the telltale lines of won’t you celebrate with me commemorating a birthday or an accomplishment, or some other of Clifton’s poems fitting neatly into a white square. The reissue of her 1976 memoir, Generations, comes at a time of renewed interest in the poet’s life and works. Her daughter Sidney is currently leading the process of transforming the family’s home in Baltimore into a community space to commemorate her parents’ artistry (her father, Fred, was a sculptor and philosopher). Meanwhile, the novelist and poet Honorée Fanonne Jeffers is at work on a biography. It is clear that Clifton’s legacy continues to blossom.

Clifton, who died in 2010, is known for her powerful epigrammatic poetry, which lends itself well to sharing and resharing. Often under 10 lines, the poems cover a variety of topics of particular appeal to our identitarian times: body image, aging, birthdays, cockroaches, desire, the religion of our parents made anew. Generations is a rare foray into prose, and it reveals a lesser-known aspect of the poet’s legacy. To read Generations is to come to terms with the full complexity of her vision, which is not only celebratory but also deeply invested in justice and redress.

Clifton’s was a working-class Black family with a prototypical migration story from the agrarian South (Bedford County, Va.) to the industrial North (Depew, N.Y.). Generations focuses primarily on the women of her paternal lineage, refracted through the storytelling of Clifton’s father, who repeats a refrain passed down from her great-great-grandmother: “Get what you want, you from Dahomey women.”

Alongside the exceptionalism of this refrain, which harks back to her great-great-grandmother’s origins in the kingdom of Dahomey (in present-day Benin), there is an abiding humility. Clifton prized her status as an “ordinary woman” (the title of her 1974 poetry collection) as an ethical stance. Her ordinariness was a loving pedagogy, a refusal to view herself as exceptional in contrast to the community she had come from. Clifton’s genealogy is not made from the stuff of historians and archivists, but rather from the myths and silences that every family holds. In this way, Generations is a tremendously important text, because it models an archival practice for ordinary Black people who have been robbed of their history.

Though not every Black family can trace their ancestry back to specific African nations, most of us know the contours of our ancestors through stories that fade in detail with each passing generation. These stories form lines that, in Clifton’s words, “connect in thin ways that last and last and lives become generations made out of pictures and words just kept.” The fadedness of these narratives can be frustrating: Clifton once asked her father for proof to back up their familial mythos, because “the time may not be right and it may just be a family legend.” Paradoxically, the court records and bills of sale in which her ancestors might appear would not make their memory feel any more alive—in fact, perhaps the opposite. The “thin ways” of remembering—photographs, incomplete stories, scraps of memory—carry the fingerprints of our dead more surely than the written records of the violence committed against them. As Clifton ultimately discovers, “In history, even the lies are true.”

Clifton’s memory work in Generations is inextricable from her deeper spiritual investigations in the 1970s. The memoir was first published in the same year that Clifton began to document the otherworldly communications of a variety of spirits, including her deceased mother. This gives the epigraphs to the various sections of Generations, all taken from Walt Whitman’s “Song of Myself,” an almost spectral resonance. Lines like “They are alive and well somewhere” and “To die is different from what anyone supposed, and luckier” mean something different when they are applied literally. In the case of Clifton’s writing, as in her spiritual practice, death is not the final word.

Mammy Ca’line, Clifton’s great-great-grandmother, was born in 1822 as a free woman of Dahomey. She was 8 years old when she was made to walk from New Orleans to Virginia, and even younger when she was taken from her family and survived the boat crossing from Africa. In her essay “Venus in Two Acts,” Saidiya Hartman notes that “there is not one extant autobiographical narrative of a female captive who survived the Middle Passage.” Clifton’s father, who lived with Mammy Ca’line as a child, “would ask her what was it like on the boat and she would just shake her head.”

Even Phillis Wheatley, the celebrated 18th-century poet, had no words for the experience of a girlhood crushed in a slave ship. Like Mammy Ca’line, Wheatley was another African girl who had survived the untold horrors of the Middle Passage. Wheatley and Mammy Ca’line must have been about the same age when they made the journey, but we cannot know for sure. When Wheatley was first enslaved in Boston, her age was determined not by a birthdate but from the gaps in her baby teeth.

It falls to Mammy Ca’line’s great-great-granddaughter to give voice to a stolen girlhood. Even before she wrote Generations, Clifton was speaking with Mammy Ca’line, as in the 1969 poem “ca’line’s prayer”:

Some might recognize here, chopped and disjointed, the name of the Yoruba spirit Yemoja (or Yemayá), who rules the ocean Mammy Ca’line was forced to cross. In that crossing, the syllables have been detached from meaning. The goddess is dismembered and must be restitched through the act of remembering the child who was made property.

We learn in Generations that Sam Louis Sale, Mammy Ca’line’s husband, had also been separated from his parents as a child—he was given to his enslavers as a wedding present when he was a boy. Incredulous, Clifton’s father tells her, “He was somebody and he was a present, a wedding present.” But Mammy Ca’line was also given as a present to her husband by his enslaver, when she was a girl and he was an old man. This adds a further layer of remove in the effort to remember Mammy Ca’line in terms of her own desires and aspirations. What does it mean to be the present of a present, the property of property?

Lucy Sale was Mammy Ca’line’s daughter. She carried with her all the love and fierce tenderness that being someone’s daughter entails. But all that remains of Lucy are the women named after her (Lucille Clifton and her paternal aunt) and a family story that she was the “first Black woman to be legally hanged in the state of Virginia.” The word “legally” is important here, as it gestures to the multitude of enslaved and free Black women who were brutally killed without trial. Lucy Sale had murdered a white man, and being the daughter of Mammy Ca’line—who was a respected midwife in the community—only afforded her the courtesy of not being lynched.

This white man, Harvey Nichols, was the father of Lucy’s son, Gene. It was after the Civil War, and Harvey Nichols had “come South after the war to make money.” Their relationship is presumed to have been consensual because, according to Clifton’s father, Lucy “didn’t do nothing she didn’t want to do and nobody could force her because she was Mammy Ca’line’s child.” But Clifton’s narrative has already demonstrated that being somebody, or being somebody’s child, did not inoculate the family from ill treatment by the white and powerful.

In the early 1950s, Zora Neale Hurston reported on the similar case of a Southern Black woman, Ruby McCollum, who was also accused of killing a white man who had fathered her child. McCollum was not allowed to speak to reporters at the time of the trial, and her testimony is obscured by the racist court proceedings and the violence of her incarceration. But as Hurston wrote for The Pittsburgh Courier, “It is a high probability that [McCollum] is a victim, instead of the cold and ruthless killer that the state claims her to be.”

Cases like these bring up the thorniness, even the impossibility, of establishing consent in Black women’s childbearing and sexual encounters throughout much of history. And it is made all the more poignant by the fact that Clifton, like her namesake, was a survivor of sexual abuse. Because she cannot access the voices of her ancestors, Clifton writes, “I turn in my chair and arch my back and make this sound for my two mothers and for all Dahomey women.” This is another echo of Whitman, only Clifton’s “barbaric yawp” is polyphonic: Black women gather like crows in the sound, wheeling.

In ominous tones, Clifton imagines the scene of her namesake’s execution. She pictures “Mammy Ca’line standing straight as a soldier in green Virginia apart from the crowd of silent Black folk and white folk watching them and not watching the wooden frame swinging her child.” Mammy Ca’line stands in judgment of all those, both Black and white, who can watch somebody’s child die. Her gaze of indictment calls to mind Toni Morrison’s novel Sula, with its distinction between watching and seeing. “Watching” implies a show and an appetite for suffering, in this case the suffering of Black women. Yet for Ca’line and her progeny, “seeing” means looking toward the structures that make such a brutal act of violence possible—swinging the searchlight away from a Black woman’s individual actions and onto the society that criminalizes them.

In an untitled poem from her 1991 collection Quilting, Clifton adopts a “monstrous unnamed baby” and calls her “History.” She warns the reader:

she is more human now,
learning language everyday,
remembering faces, names and dates.
when she is strong enough to travel
on her own, beware, she will.

The work of Generations enacts this accumulation of history, and it’s no accident that the historical process is feminized. Stories about Black women in the archive are often absent faces or humanizing details. But in Clifton’s motherhood metaphor, Black women’s history can be nourished in spite of its violent and spare beginnings. Generations is an example of Black women’s history made robust by a living Black woman’s care. And a strong history can bring about a reckoning.

In some ways, Clifton is a messianic thinker. Many of her poems involve fires and floods and the future of the planet after environmental catastrophe. For instance, in a poem from her 1972 collection Good News About the Earth:

The premise of much of Clifton’s work is that memory persists even in the absence of words, details, and all of the trappings of what we know as “history.” And yet it is a history nonetheless, a history that will someday make itself heard and make the world anew. Though this return is represented here as a scourge on the world of “white men,” it is, perhaps, good news for the rest of us.

If we take seriously the lesson of Generations, we would see that “celebrating with” Clifton would require a complete restructuring of American society through a reckoning with the many violences—sexual, epistemic, historic—that the Black women she chronicles have faced. Generations encourages us to take seriously the revolutionary spirit of Clifton’s work, one that goes forgotten in the frame of a white square in digital space. She asks her readers to understand the stakes of a Black family’s survival and to wonder what became of our unnamed mothers. And in the wondering, we will be changed.

It’s Time to Hold Law Firms Accountable for Their Role in Climate Change
Statues Down!