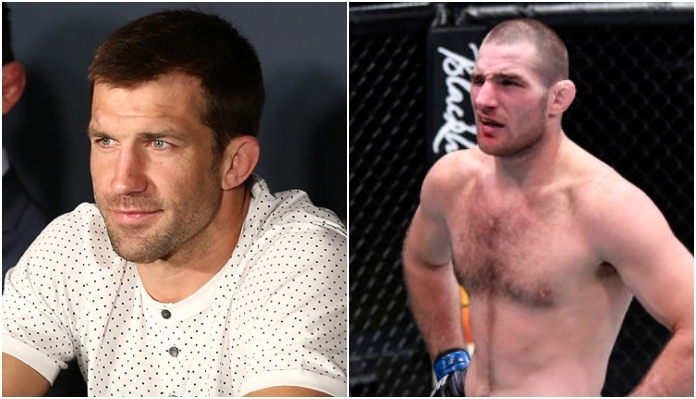 The bad blood between Luke Rockhold and Sean Strickland is heating up.

Before their upcoming bout was made official, Strickland (24-3) took to Instagram to address the idea of him taking on Rockhold (16-5). In the video, the surging 185-pound contender let it be known that if he sees Rockhold in the RVCA gym parking lot, he will “walk up to you and smack you in the f*cking face.”

The former UFC middleweight champion had plenty to say about his upcoming opponent and his comments on Monday.

Luke Rockhold on Sean Strickland: You touch me in the parking lot, I’ll be the one in jail. #themmahour pic.twitter.com/8Gj4VIkEVk

“I just don’t like ’em, man,” Luke Rockhold said on The MMA Hour. “He’s got a bad attitude. He’s that guy in the gym that just no one likes ’em — the worst energy you’ve ever felt. I didn’t like him at first. I think the first time he walked in the gym I was hungover, I was beat up, and I was watching the guy run around the gym barking, talking, saying the dumbest sh*t. Just not really like a good person, put off everybody, not a care for anybody in the gym. So I just got kind of frustrated listening to him talk, like this kid’s a f*cking idiot. Maybe I will put the gloves on, I’ll go spar him. I’ll work with him one time. That’s really the only encounter I ever had with him.

Luke Rockhold and Sean Strickland are set to face off on Nov. 6 inside New York City’s Madison Square Garden at UFC 268. The bout will be Rockhold’s first since his light heavyweight debut and defeat to Jan Blachowicz in July 2019.

“Other than that, him saying that he wants to kill people in the ring,” Rockhold continued. “Like, ‘It would be cool if I killed a guy.’ What the f*ck are you talking about, dude? Those are the people that need to die themselves. Then you want to talk about coming in the parking lot — coming after me. I didn’t say anything really about you but what did he say? Something about a misdemeanor and sh*t? Motherf*cker, you come at me, you touch me in the parking lot I’ll be the one in jail. I promise you that. You’ll be the one people will have to question if you’re alive.”