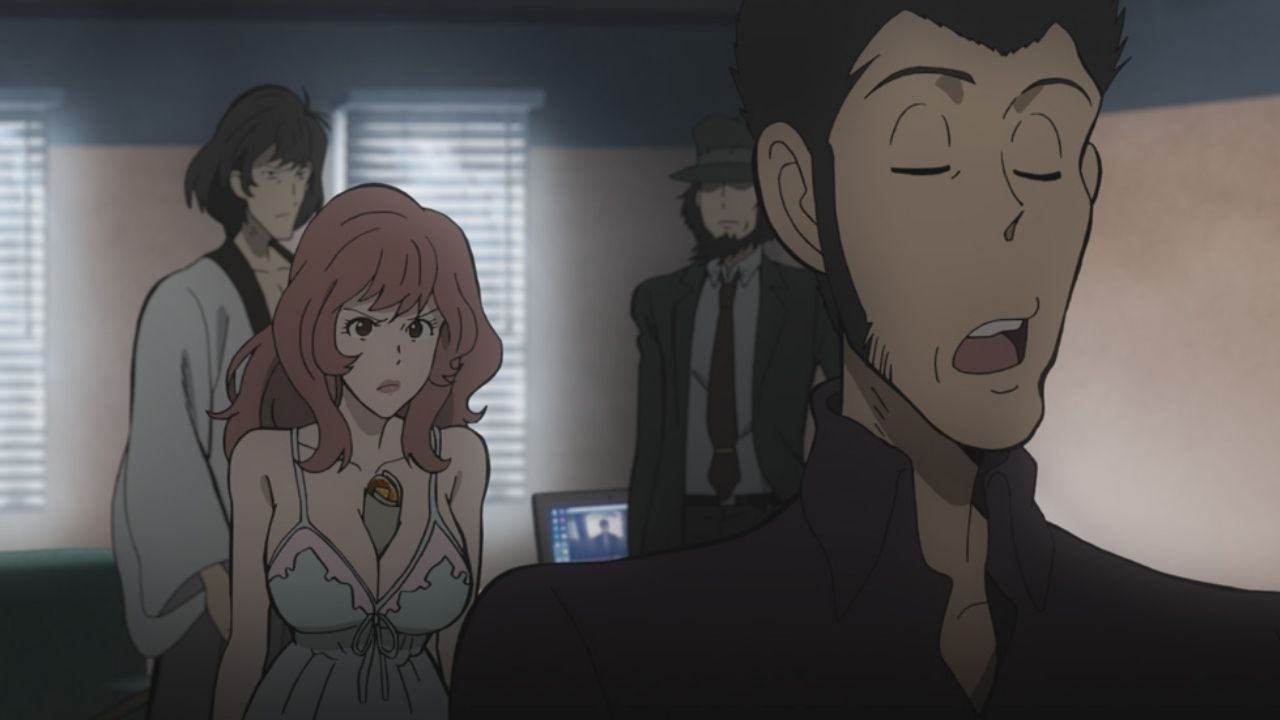 In episode one of Lupin III Part 6 titled, “Enter Sherlock Holmes,” Sherlock and Lupin come face to face once again. Sherlock is surprised to see Lupin in London once again as Lupin emerges from a blast on his motorcycle.

After escaping from a prison secured with AI drones and guns with quick-setting adhesives, Jigen parts ways with Lupin and the others.

In essence, episode zero was a love letter to Kiyoshi Kobayashi, the eighty-eight-year-old retiring voice actor who played Jigen for over five decades.

The gang then goes to London and rescues Albert d’Andresy, disguised as Lord Faulkner. While running away from the Scotland Yard, they stumble upon the one and only Sherlock Holmes.

What will this encounter lead to? Will Sherlock capture Lupin, or will Lupin slip out of his hands? Let’s find out as we discuss the latest updates.

Episode one ends with Sherlock, Lily, and Lupin coming face to face. Lily’s face twists in shock and horror as she screams while looking at Lupin.

It is also noted that Sherlock’s dearest friend and assistant, Watson, is missing. This could perhaps be an indication of something happening to Watson. We could discover what exactly unfolded and what the trio’s history is.

Episode two is mainly going to focus on the back and forth between the detective and the crook, finally leading up to a confrontation where two exchange dialogue, and we get to know what had happened between them.

Lupin III Part 6 is on a break for two weeks and will continue as per schedule after the break.

The episode begins in London, where we see Albert disguised at Lord Faulkner, stealing a poster. Sherlock helps the Scotland Yard catch him and soon leaves the scene with Lestrade in charge.

Just as Lestrade starts questioning the criminal, the MI-6 intervenes, demanding the man’s custody. This confusion gives Albert a chance to escape, and Lupin and his crew give him a hand.

Albert asks Lupin what he was doing in the city, to which Lupin replies that he was investigating a mysterious society called the “Ravens.”

Meanwhile, we see Sherlock taking it easy with petty cases as he fosters over a little girl, Lily, who wants to follow in his footsteps. As Sherlock invites his neighbors over for food, the real Lord Faulkner gets killed during an investigation by the Ravens as a mysterious man straps a bomb on him.

The headquarters also get destroyed during this. Sherlock and Lily decide to see Lestrade, but on their way, he spots Lupin. Sending Lily to Lestrade, Sherlock follows Lupin as he runs away from Zenigata.

Finally, we get a shot of Lupin on his motorbike, meeting Sherlock and Lily as Lily screams in horror at the sight of the crook.

Watch Lupin the Third on:

About Lupin the Third

Lupin III, also written as Lupin the Third, Lupin the 3rd or Lupin the IIIrd, is a Japanese manga series written and illustrated by Monkey Punch.

Arsène Lupin III, the grandson of the fictional gentleman thief, Arsène Lupin, is considered the world’s greatest thief, known for announcing his intentions to steal valuable objects by sending a calling card to their owners.

His right-hand man and closest ally is Daisuke Jigen, an expert marksman who can accurately shoot a target in 0.3 seconds. Although Lupin and Jigen frequently work as a two-man team. They are often joined by Goemon Ishikawa XIII, a master swordsman whose sword can cut anything.

Or Fujiko Mine, a femme fatale and Lupin’s love interest. Although Fujiko usually works together with the others, she occasionally exploits Lupin’s interest in her to steal the treasure for herself. Lupin and his gang are always chased by Inspector Koichi Zenigata of Interpol.