Like everyone else, Bill Maher has been paying attention to the continuing fallout from Meghan Markle and Prince Harry’s Oprah interview last Sunday. And he spent a lot of time on Friday’s episode of “Real Time” talking about it, including the fact that he is skeptical about some of what Markle said about her experience with the royal family.

Not the accusations of racism of course, which he did believe. Instead he was referring to her claims regarding what she did and didn’t know about her now-husband’s family before they met.

“Also this week, we finally got some clarity on the most pressing issue of our time: Did Meghan make Kate cry or did Kate make Meghan cry?” Maher said, kicking off the bit. “Tell me now so I know who we’re not talking to at lunch. I never understood this fixation with the royal family, but boy this week you’re all talking about it. You can’t avoid it.”

“You can hate the racism but not love them for everything else,” Maher said about the interview itself. “You know, I mean, I mean Meghan did claim that before dating Harry she never googled him, and she said she didn’t know much about the Royal Family. Yeah in the first three dates, she thought he was Ed Sheeran.”

Also Read: Bill Maher Is Over Being Reminded of Things Like Cancer and That Black Lives Matter (Video)

“Come on Meghan, you filmed your television show for years in Toronto,” Maher continued. “Every time you bought a mochaccino you used coins with your mother-in-law’s face on it.”

Then he touched on one of the most disturbing accusations of racism, and used it to get into a joke at the royal family’s expense. “But of course the big bombshell — not that it’s not that big a bombshell — that there’s horrible racism, just terrible, in the Royal Family,” he said. “And I’m sure it was very painful, and members of the royal hierarchy she said were actually asking her, you know, when she was pregnant how dark the baby’s skin would be. And the queen said — problematic — she said ‘this is why we’ve always discouraged sex outside the family.’”

Later in the episode, Maher revisited the topic with his panel guests Larry Wilmore and Scott Galloway — and also dropped in a shout out to TheWrap along theway.

“In January of last year, right before the pandemic, we did an editorial about it because they had just announced they were stepping back. And I said, why don’t you two, just instead of just stepping back, why don’t you just renounce the whole bulls—, the lock, stock and barrel of it? What is this royal bulls— to begin with?” Maher said.

“People calling each other ‘your highness’? What could be less woke than that? Where are the woke people on that one? Your highness? How gross. And then like the next day — show that headline, we have a headline here that just shows you… there, see,” Maher continued. At which point, we’ll pause to note, he displayed an image of TheWrap’s coverage of the topic: 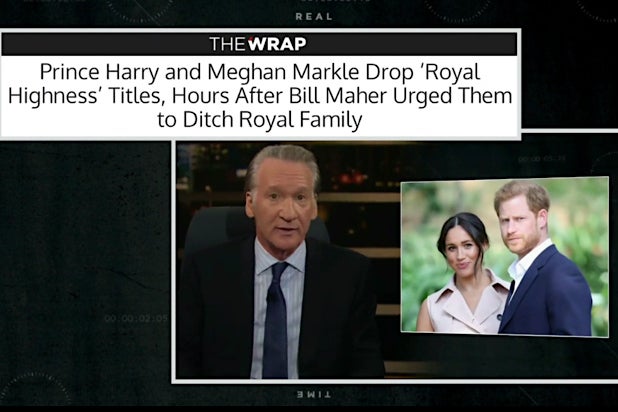 Now, back to Maher:

“And then like the next day they did it, and I thought oh well, they heard me,” he added. “No. I see that they’re just mad that their family was mean to them. They don’t want to renounce royalty. And they still act kind of regal.”

“Yeah it is interesting that that did come out that way and, you know, people were saying, well, did they say that about the baby, and all that about wanting to know how dark the baby’s gonna be? I’m like, a thousand percent, absolutely,” Wilmore said in response. “Not only does somebody say that — they were all thinking it. They’re the royal family. It’s not ‘Bridgeton,’ you know. The tabloid press is gonna cover this, not Lady Whistleddown or whoever that is.”

Then Galloway chimed in. “A white guy’s hundred year old grandparents who traveled to hunt stags in Range Rovers have a racial bias? That’s news?” he joked.

“But I must say, for everyone who’s like, ‘There’s racial bias in the royal family!’ There are other royal families in the world. Americans only seem to be interested in the white one,” Maher added.

Chris Harrison Won’t Return as Host for ‘The Bachelorette’
Watch: Video Game Historians Are About To Unbox 600 Rare And Retro Game Magazines