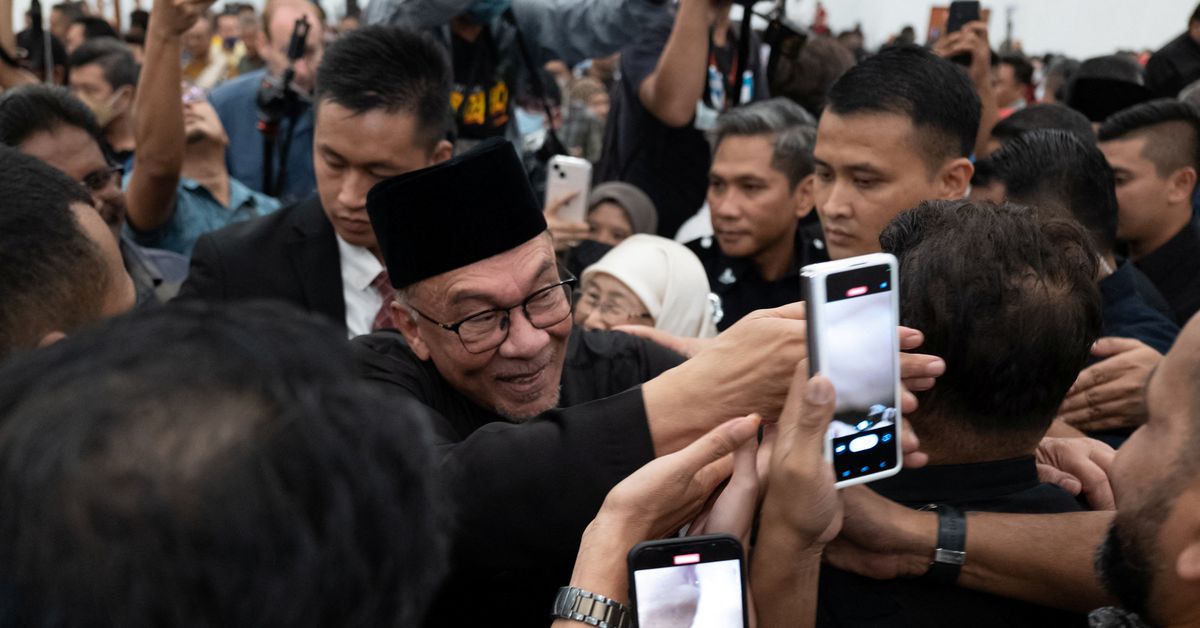 KUALA LUMPUR, Nov 25 (Reuters) – Malaysia’s newly appointed Prime Minister Anwar Ibrahim said on Friday his primary focus would be on the cost of living as he takes office with a slowing economy and a country deeply split after a close election.

Anwar, 75, was sworn in as premier on Thursday, capping a three-decade political journey from a protege of veteran leader Mahathir Mohamad to protest leader, a prisoner convicted of sodomy and opposition figurehead.

Anwar, who was appointed by Malaysia’s king on Thursday following an inconclusive election, said his primary concern was the economy and he would have a smaller cabinet than those of previous administrations.

“My priority now is addressing the cost of living,” he told a news conference after reporting for duty at the prime minister’s office.

Anwar has yet to announce any cabinet appointments for his coalition government. He had earlier indicated there would be two deputy prime ministers in his cabinet – one from former ruling alliance Barisan and another from smaller political blocs in Malaysia Borneo.

His rival, former prime minister Muhyiddin Yassin, had refused to concede, challenging Anwar to prove his majority in parliament. But on Friday, Muhyiddin said he accepted Anwar’s appointment and his bloc would play the role of the opposition.

But neither leader won a majority, which raised the risk of a standoff exacerbating instability in ethnically diverse Malaysia, which has had three prime ministers in as many years.

Anwar had over the course of his career been denied the premiership despite getting within striking distance several times. He also spent nearly a decade in jail for sodomy and corruption after what he says were politically motivated convictions.

Markets surged on Thursday on the end of political deadlock, but investors will be monitoring how Anwar manages the aftermath of the election.

Malaysian stocks on Friday morning were (.KLSE) flat, after 4% gains the previous day, while the ringgit extended gains, up nearly 1%.

Anwar’s supporters expressed hope that his government would avert a return to historic tensions between the ethnic Malay, Muslim majority and ethnic Chinese and Indian minorities.

Anwar’s coalition, known as Pakatan Harapan, won the most seats in Saturday’s vote with 82, while Muhyiddin’s Perikatan Nasional bloc won 73. They needed 112 – a simple majority – to form a government.

The long-ruling Barisan bloc won only 30 seats – the worst electoral performance for a coalition that had dominated politics since independence in 1957.

Anwar said on Thursday the Barisan and an alliance of parties from Malaysian Borneo had pledged to support his government.

On Friday, he said another Borneo bloc had also joined, giving him the backing of more than two-thirds of members of the 222-seat parliament.

A two-thirds majority will allow Anwar’s government to amend the constitution. No Malaysian government has held such a majority in the lower house since 2008.

Muhyiddin’s bloc includes the Islamist party PAS, whose electoral gains raised concern within the ethnic Chinese and Indian communities, most of whose members follow other faiths.

Authorities have warned of a rise in ethnic tension since the vote on social media and short video platform TikTok said this week was on high alert for content that violated its guidelines.

Another looming issue for Anwar to deal with is the budget for next year, which was proposed before the election was called but has yet to be passed.

Anwar said he would convene parliament on Dec. 19 for a vote of confidence to prove his majority in the lower house.