Manchester City: Further additions to squad to come according to chairman

Home /Sports/Manchester City: Further additions to squad to come according to chairman 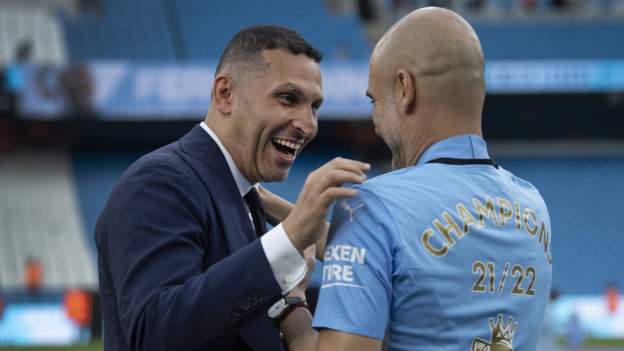 Manchester City will make “a couple more” additions to Pep Guardiola’s squad this summer, according to chairman Khaldoon Al Mubarak.

In addition, they have spent £14.1m on Argentina forward Julian Alvarez, 22.

“Every season some players leave and we have to refresh. We will be doing a couple more. We will try to go as fast as we can but it is not always entirely in our control.”

However, any move for the 26-year-old will be harder now Leeds have retained their top-flight status.

Guardiola also has a long-standing desire to bring in another left-back, with Brighton’s Marc Cucurella, 23, thought to be high on that list.

City, for all their domestic success, are yet to win the Champions League and Mubarak has underlined the club’s desire to compete for major honours, rather than have a stated aim to win any individual competition.

“We approach every season to try to win every competition,” he added.

“That has been the case for the last 10 years. You cannot argue in the last six years under Pep, we show up every game with the full intention to try to win.”

Guardiola’s contract has another season left to run and the 51-year-old has not given any guarantees about what happens beyond that point.

And, though he was asked about the issue in his interview, Mubarak did not provide a direct answer.

“Pep has never stayed as long at any club than he has at Manchester City,” he said.

“It is a partnership that has done wonders. Next year will be another exciting chapter. The conversation will be at the right time and pace and within a framework that works for Pep.”

Mubarak says the final-day 3-2 comeback victory over Aston Villa, which sealed the title by a point, was one of the more obvious standout moments from a season where, once again, City have competed with Liverpool for all the major prizes.

It is not a situation he sees changing any time soon.

“Liverpool are a team we give highest respect towards,” he said. “As with any rivalry, like the one we have had with Liverpool, we have made each other better.

“We are the benchmark for global football.”