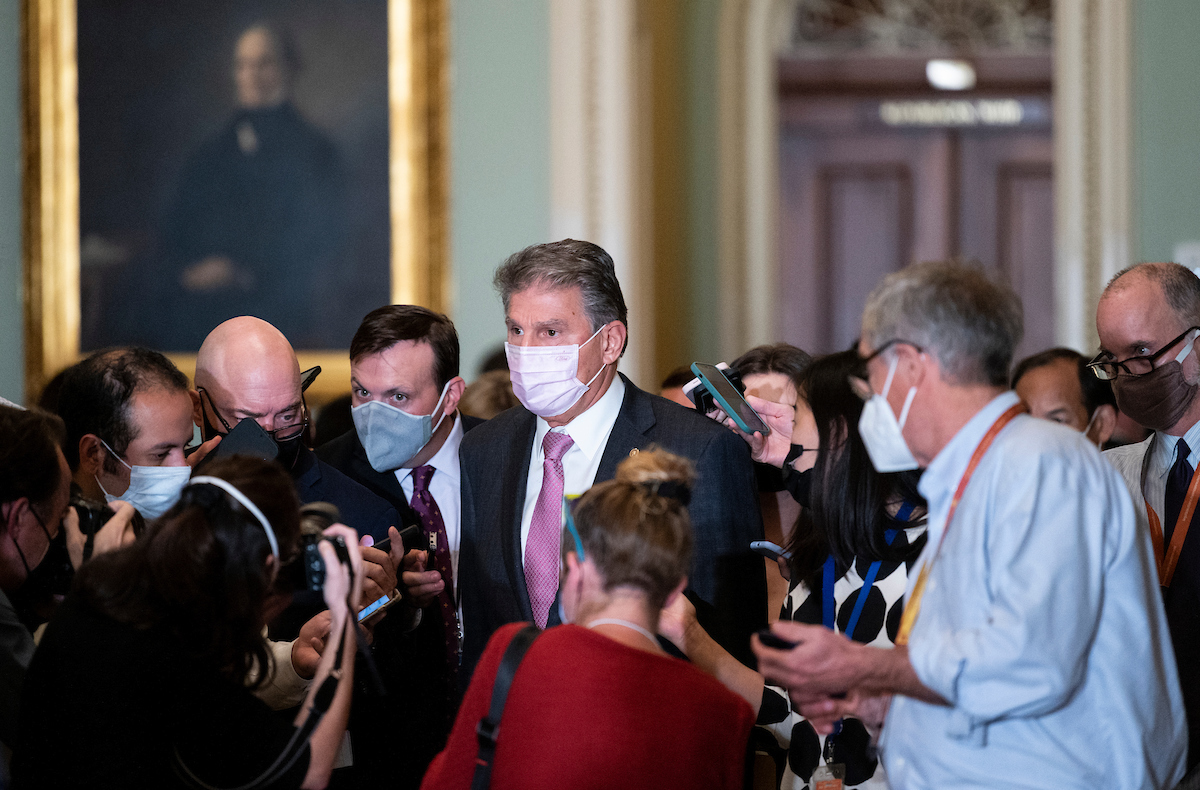 A plan to beef up tax enforcement by requiring banks to report new data on accounts to the IRS is unlikely to survive in a compromise budget reconciliation package, Sen. Joe Manchin III said Tuesday.

The West Virginia Democrat, a key negotiator on the partisan spending and tax package, said during an Economic Club of Washington discussion that President Joe Biden agreed with his assessment that the bank reporting plan would be overly intrusive and unworkable.

Recounting a conversation he had with Biden at a breakfast meeting Sunday, Manchin said he told the president: “I don’t know what happened. This cannot happen. It’s screwed up…. And so he says, ‘I think Joe’s right on that,'” Manchin said. “So I think that one’s going to be gone.”

Manchin’s position would poke another roughly $250 billion revenue hole in the bill’s offset package, on top of some $950 billion that’s already likely out of the picture due to opposition to tax rate increases from Sen. Kyrsten Sinema, D-Ariz., another critical swing vote.

Top Democrats were trying to wrap up negotiations Tuesday on the reconciliation bill in order to have at least a “framework” in hand they could sell to House progressives so they wouldn’t block a separate Senate-passed infrastructure bill later this week. Democrats want to clear that measure before a temporary extension of surface transportation programs lapses Oct. 31.

“There’s not that much more time,” Speaker Nancy Pelosi, D-Calif., told reporters Tuesday. “We have to have decisions largely today, a little bit into tomorrow, so we can proceed.”

Pelosi and Majority Leader Steny H. Hoyer, D-Md., separately told reporters that progressives also want assurances that the Senate will be able to pass legislation that emerges out of the reconciliation framework, without changes.

“I think they’re going to need to have a framework and expression that gives them confidence that in fact the framework … passed by the House will also be passed by the Senate,” Hoyer said.

As part of an effort to pay for the massive package designed to expand the social safety net and tackle climate change, lawmakers proposed cracking down on tax compliance through more extensive reporting by banks.

The Treasury Department initially proposed reporting on all accounts with at least $600 flowing through them. That threshold was later raised to $10,000 on top of wages, salaries and federal benefits after a storm of protests from business and banking interests.

So under the new structure if an individual is paid a salary of $60,000, for example, and then receives an extra $5,000 in income from another source and spends all of it, that account would meet the “gross flows” threshold and need to be reported to the IRS.

But Manchin said even a $10,000 threshold would be too intrusive. And business and banking groups echoed that view in a letter to Biden this week.

“We strongly urge the Administration to withdraw this reporting regime and consider how the IRS can use its existing authorities to directly focus on those taxpayers suspected of evading their taxes instead of casting such a wide net,” said the letter, which was signed by groups including the U.S. Chamber of Commerce, the National Federation of Independent Business, and the National Bankers Association.

But doing away with the bank reporting provision would crimp efforts at tax enforcement. The bank reporting rule was expected to raise about $200 billion to $250 billion in new revenue over a decade, according to a recent letter from the Treasury Department to House Ways and Means Chair Richard E. Neal, D-Mass.

That’s down from $462 billion in the earlier proposal from Treasury, though pieces of that plan imposing new broker reporting rules on cryptocurrency transactions estimated to raise $28 billion were pulled out and included in the separate bipartisan infrastructure bill that’s being readied for a vote this week.

But Neal and other top Democrats were nonetheless relying on the bank reporting proposal to make up for lost revenue to pay for the broader package. “I think that it ought to continue being under discussion,” House Ways and Means Chairman Richard E. Neal, D-Mass., said Tuesday.

But Neal acknowledged Manchin’s key role in the negotiations and seemed to recognize the possibility they may need to drop the bank reporting proposal. “If Sen. Manchin is going to go over the goal line with us, I think we should be listening to some of what he has to say,” Neal said.

Manchin’s opposition to scaled-back bank reporting rules may not matter if the total price tag of the reconciliation bill creeps down closer to the $1.5 trillion he seeks. Manchin said Tuesday that “there’s no way” the final package will be “anything close” to $2 trillion, which is what party leaders and the Biden administration have been pushing for. Figures between those two numbers have also been discussed.

The House Ways and Means Committee included enough offsets in its section of the reconciliation package to get close to $2.9 trillion. Nearly $1 trillion of that is derived from tax rate increases on corporations and households earning above $400,000, which appear likely to be dropped.

As much as $500 billion extra may need to be removed due to opposition from Sinema and other Democrats to drug price negotiation language, though House Energy and Commerce Chairman Frank Pallone Jr., D-N.J., said talks are ongoing on that front.

Some of the lost money could be replaced through what advocates are labeling a “billionaire’s income tax,” or a new tax on unrealized capital gains, that top Democrats say could generate $200 billion to $250 billion. Democrats are also discussing a minimum tax on “book” income, or what publicly-traded companies report on their financial statements to shareholders, that could generate at least $150 billion.

Sen. Elizabeth Warren, D-Mass., who proposed a “wealth tax” on the very richest during her 2020 presidential campaign, said Tuesday that billionaires mostly don’t even earn salaries that can be reported to the IRS.

“Billionaires, who make their money very differently, have an opportunity not to report income, in direct violation of law,” said Warren, who cited estimates of some $200 billion in annual revenue lost to the “tax gap” between what the very wealthy pay in taxes and what’s technically owed. “That’s money we could spend on child care. That’s money we could spend on the climate fight and that’s what we should do,” Warren said.