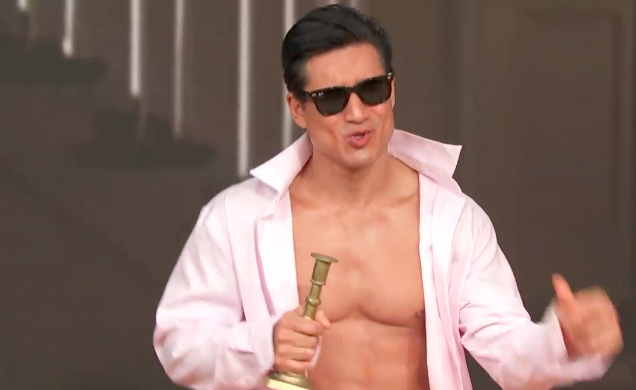 There are two tried-and-true approaches to the Halloween costume that guys have been taking for years. The first low effort method involves just cobbling an outfit together from stuff you already own: think that “Clark Kent” costume every guy wears at some point, which is just a suit with glasses and maybe a peek of a Superman T-shirt underneath. The second involves coming up with some on-theme way to show off the muscles you spent all summer working on and which are going back under layers of clothing in the fall: the bedsheet toga was pretty much invented for this purpose.

Mario Lopez managed to hit both of these marks with his Halloween getup in a brief skit for Access Hollywood this year, dressing up as Tom Cruise in the 1983 comedy Risky Business and reenacting that movie’s most famous scene, in which Cruise’s character Joel, who has been left home alone for the weekend, dances around the empty house in his socks, briefs, shirt and sunglasses, singing along to ‘Old Time Rock and Roll’ by Bob Seger & The Silver Bullet Band.

“Sometimes you just got to say, what the f**k,” Lopez quipped at the end of the video, which he shared on Instagram, echoing one of Cruise’s lines in the movie.

It was a smart choice; not only is this a classic go-to guy costume, but it also meant that he got to show off his shredded six-pack abs. (It also had the cute factor: Lopez kitted his son out in a similar outfit.)

Lopez has maintained a buff physique throughout his career—ever since the halcyon days when he played A.C. Slater in Saved by the Bell—and showed that he is still going hard in the gym in a post to mark his 48th birthday earlier this month. “Feeling strong, still,” he said. “Age ain’t nothing but a number.”