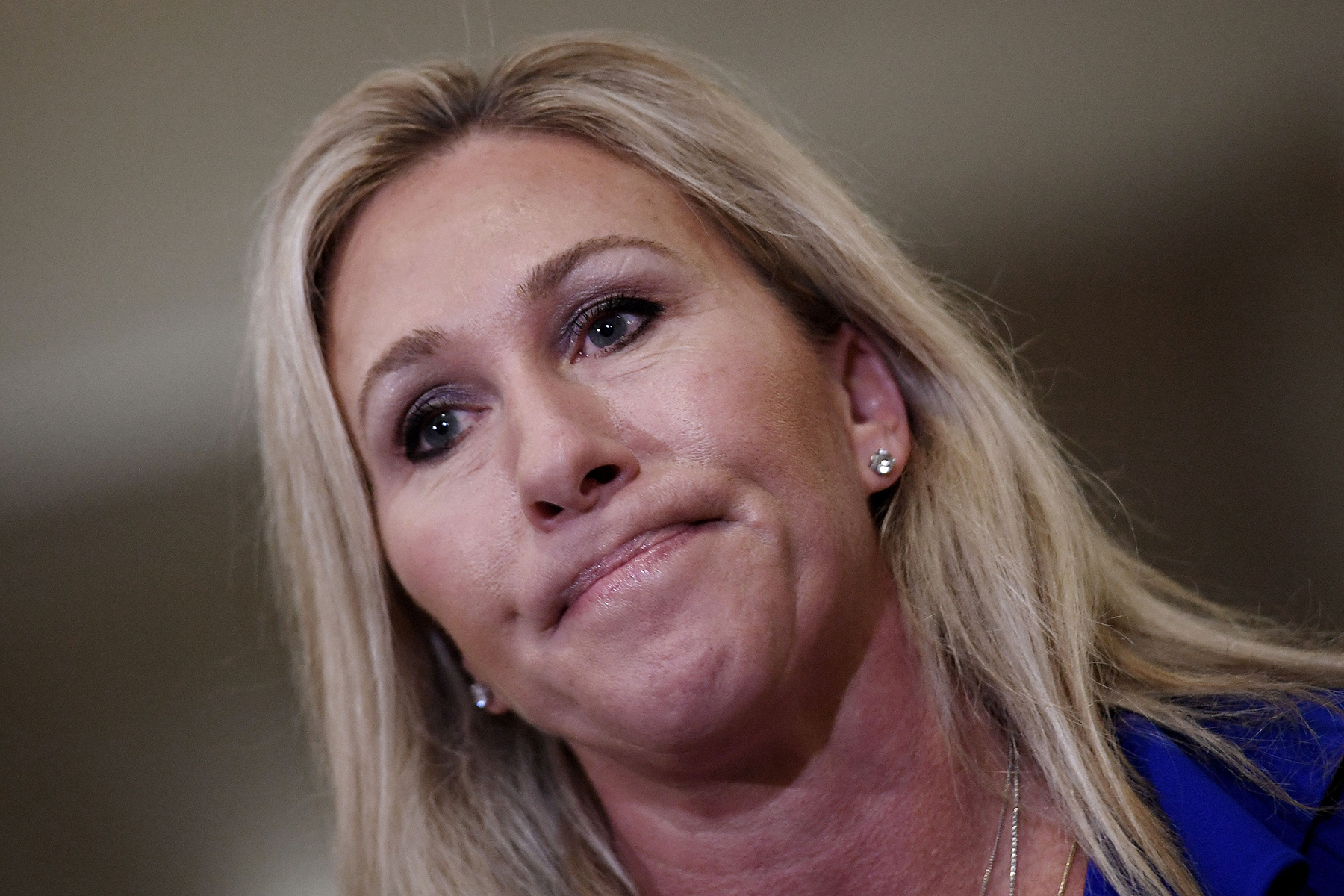 Republicans have long been trying to thread the needle of defending the Jan. 6 rally to protest the 2020 election results while trying to wash their hands of any culpability for the violent riot at the Capitol that followed. Rep. Marjorie Taylor Greene (R-Ga.) isn’t splitting hairs. During an appearance on Steve Bannon’s War Room podcast on Tuesday, Greene cited the Declaration of Independence to defend the actual insurrection, the one in which hundreds of Trump supporters broke into the Capitol, resulting in five deaths and dozens of injuries.

“Jan. 6 was just a riot,” Greene said, implying the violent attempt to overthrow American democracy paled in significance to the “lies of BlueAnon” and the media, which she said would do anything to cause her to be killed. Never mind the actual lies about the 2020 election results that led to the storming of the Capitol that put the lives of her colleagues in danger on Jan. 6.

“If you think about what our Declaration of Independence says, it says to overthrow tyrants,” Greene continued in defense of the riot. “There is a clear difference between Jan. 6 and the Marxist, Communist revolution, the Antifa, BLM, Democrat ground troops waged on the American people in 2020.”

Marjorie Taylor Greene says “January 6 was just a riot at the Capitol” and media outlets “would do anything to cause someone like me to be killed.” pic.twitter.com/YSUqRAnEy4

Greene’s comments come two days after Rolling Stone published an explosive report linking her and a handful of other Trump-supporting Republicans to the planning of the events of Jan. 6 that turned violent. Greene’s communication director wrote in an email to Rolling Stone that “Greene and her staff were focused on the Congressional election objection on the House floor and had nothing to do with planning of any protest.”

Her office did not decry the riot, though, which isn’t surprising considering Greene has suggested in the past that violence may be necessary to stop the Biden administration. “You can’t allow it to just transfer power ‘peacefully’ like Joe Biden wants, and allow him to become our president,” Greene said before taking office.

“You can’t allow it to just transfer power ‘peacefully’ like Joe Biden wants, and allow him to become our president,” Marjorie Taylor Greene said. #ArrestGreene

Greene has also been defending the Capitol rioters for months, saying they’ve been “abused” by the government and attempting to hold a press conference to advocate for them in July (the press conference was disrupted by protesters). Two months later, Rep. Sean Maloney (D-Pa.) told MSNBC that he was with Greene while the rioters were storming the Capitol, and that she, “in particular,” was “gleeful” at what was taking place outside the building.

“They had been at the White House, I believe, the day before — talking about what was going to happen,” Maloney added. “I mean, it’s not really a mystery when Mo Brooks is down at the rally, whipping up the crowd and pointing them toward the Capitol, I believe, with a bulletproof vest on … a lot of this is right out there in the open.”

Brooks was also named in Rolling Stone‘s report about the Republican members of Congress who — or whose staff — communicated with Jan. 6 organizers. The fact that Brooks spoke at the rally at the Ellipse — and that, as Maloney noted, he was reportedly wearing body armor — would seem to suggest he had something to do with the planning, as would the fact that far-right organizer Ali Alexander said explicitly that Brooks and two other representatives “schemed” together to coordinate what was going to happen on Jan. 6.

But Brooks responded to Rolling Stone‘s report by telling AL.com on Monday that he had nothing to do with the planning of the event, and only decided to appear at the Jan. 6 rally the day prior, after the White House asked him to. Brooks did acknowledge that his staff may have communicated with organizers. “Quite frankly, I’d be proud of them if they did help organize a First Amendment rally to protest voter fraud and election theft,” he said.