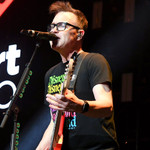 DeLonge’s update continued: “Cancer is disappearing! But, he still has more chemo to do. As tough as it is, IT IS working! Mark is a real life superhero.”

Hoppus recently said he was diagnosed with diffuse large B-cell lymphoma. According to the Lymphoma Research Foundation, DLBCL is the “most common type of non-Hodgkin lymphoma (NHL) in the United States and worldwide, accounting for about 22 percent of newly diagnosed cases of B-cell NHL in the United States.”

When Hoppus first revealed his cancer diagnosis in June, DeLonge shared more words of support, tweeting, “He is strong, and a super-human who is pushing through this difficult obstacle with a wide-open heart. #WeHaveHisBack.”

On July 19, Hoppus had the “best possible news” to share — that, like DeLonge reports this week, the chemotherapy is doing its job. “Scans indicate that the chemo is working!” he wrote on Twitter. “I still have months of treatment ahead, but it’s the best possible news. I’m so grateful and confused and also sick from last week’s chemo. But the poison the doctors pump into me and the kind thoughts and wishes of people around me are destroying this cancer.”

See DeLonge’s latest update about Hoppus — who recently said he was starting to feel well enough to play music for the first time since he was diagnosed, and as of Friday was showing his sense of humor about going through chemo — and their throwback picture on Instagram.