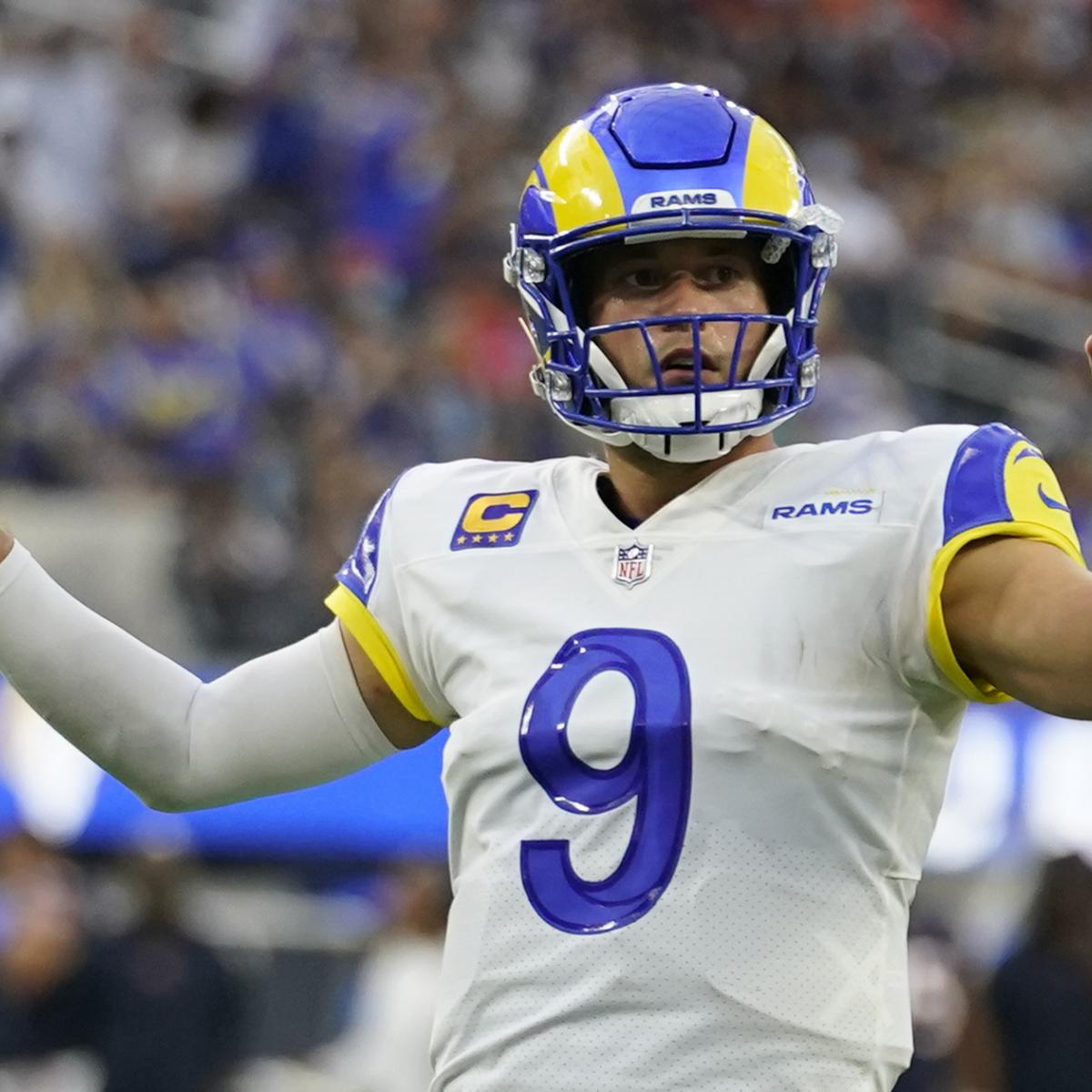 The intro to Sunday Night Football set the table perfectly for what everyone was about to see with Matthew Stafford making his first start as a member of the Los Angeles Rams. When Stafford flashed on the screen, Snoop Dogg stated, “If the ride’s more fly, you must buy. Ya dig?”

Jared Goff was a Prius. He can get his team from Point A to Point B reliably but lacks the flash of a sports car. New quarterback Matthew Stafford is a Camaro. The 13-year-veteran brings far more horsepower to the offense, which became apparent in the Rams’ 34-14 victory over the Chicago Bears at SoFi Stadium.

The contest showed exactly why the Rams felt they needed an upgrade at the game’s most important position.

Stafford shredded the Bears with 321 passing yards and three touchdowns, completing 76.9 percent of his passes along the way. Efficiency is one thing. The arm talent to expand the playbook is something altogether different and makes this match between quarterback, system and head coach so tantalizing.

Since his playing days at Georgia, Stafford’s natural throwing ability has been a sight to behold. The ball explodes out of his hand while he tosses it from multiple different arm angles. As good as Goff was at times—let’s not forget he helped lead his team to Super Bowl LIII—the 2016 No. 1 overall pick served as a cog in McVay’s offensive machinations. Stafford, though, allows for more creativity since he threatens every blade of grass.

Clearly, the record-setting quarterback saw the potential in a pairing with McVay. NFL Network’s Ian Rapoport reported that Stafford “steered himself to Los Angeles” after a chance encounter with McVay during a vacation in Mexico. The Detroit Lions nixed a potential trade with Carolina Panthers as a result. The Rams paid a heavy price by sending Goff, a pair of first-round picks and a third-round selection to Detroit for the quarterback’s services.

The initial return on the franchise’s investment is extremely promising, and Stafford delivered on what everyone expected by elongating the Rams’ offense. The team’s first touchdown of the season—a 67-yard connection to Van Jefferson—perfectly encapsulated the difference in the approach.

This Stafford guy can SLING IT 🎯

Boot action off the outside zone isn’t any different than what McVay called for years with another quarterback leading the way. However, Stafford’s ability to roll to his left, pop his hips through, reset and lace a 58-yard pass (in the air) to a receiver on the opposite hash adds a completely different dynamic to what the Rams can now do.

For example, Stafford threw two touchdowns of 50 or more yards Saturday—we’ll get to the second in a moment. As ESPN Stats & Info noted, the Rams had only two such passes through the entirety of the 2020 campaign. The consistent threat of pushing the ball downfield with the proper personnel changes an opponent’s defensive approach.

As for the second score, Stafford used some guile before he uncorked yet another deep bomb.

Another touchdown in the #RamsHouse.

Stafford airs it out to a wide open @CooperKupp for a 56-yard score!

Upon initial viewing, the Bears appeared to suffer from a coverage breakdown. In reality, Stafford held the second deep safety with his eyes and shoulders. Three defensive backs concentrated on the two play-side receivers only to have Cooper Kupp run free through the middle of the field. Stafford adjusted his feet and hit his target in stride.

“You’re not limited in anything you can do in the pass game,” McVay told reporters after the contest.

No matter what the coach says, it will sound like an indictment of Goff’s previous play because it is. The Rams saw an opportunity to upgrade the position, and they pulled the trigger. Surely, there were those within the organization that thought highly of their previous starter, but at the same time, the team acknowledged it had to get better at quarterback.

The early result validates the excitement from this offseason. NFL Network’s Peter Schrager reported the team thought Stafford could take it to the next level. McVay admitted in April to being worked up about the opportunity to collaborate with his new quarterback. Two months later, the coach called Stafford “even better than advertised,” per Sports Illustrated‘s Albert Breer.

“He’s always been top 10 because of his talents, and his ceiling is how he makes plays when [the Rams] need it late in the year,” an AFC scout said of Stafford, per ESPN’s Jeremy Fowler. “Some feel he’ll let you down at some point. Maybe that’s true, maybe not. We’re about to find out, and he’s got the ability and the smarts and the system to make it happen.”

The NFC West is rocky terrain, though, as all four teams won Sunday.

Wilson is a top-five quarterback. Murray is an extraordinary dual-threat who’s only getting better with each passing season. The thought of what Kyle Shanahan can eventually do with an athlete like Lance behind center should send shivers down defensive coordinators’ spines.

The Rams had to make a move because they didn’t have a counter to such great quarterback play. Los Angeles featured the league’s No. 1 defense and the NFL Defensive Player of the Year last season and still lost 32-18 to Aaron Rodgers and the Green Bay Packers in the postseason. Goff didn’t exceed 174 passing yards in either playoff contest, though he was dealing with a thumb injury which required surgery.

Now, a difference-maker is leading this franchise. According to Elias Sports (h/t ESPN’s Lindsey Thiry), Stafford became the first quarterback with 300-plus passing yards, three touchdowns and zero interceptions in a winning debut. Sure, he has his pluses and minuses, as 12 years in Detroit can attest. However, his ceiling is much greater than the Rams previously enjoyed.

For now, the new car smell has yet to dissipate in L.A. and the Rams are humming along with a powerful V8 engine, ready to let loose at a moment’s notice.