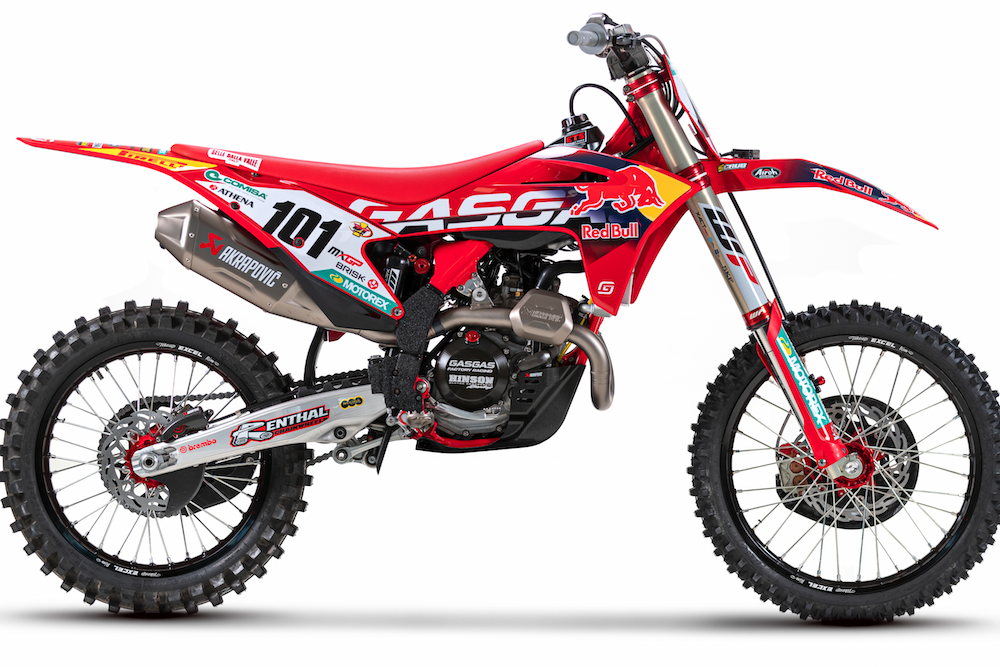 MX2 (250 class) rider Mattia Guadagnini is moving to the 450s in MXGP starting this weekend for Red Bull GasGas. The team’s main 450 man, Jorge Prado, is currently out with a shoulder injury.

The following press release is from GasGas:

GUADAGNINI EAGER TO GET ON THE GAS ON HIS MC 450F AT MXGP OF SARDEGNA.

Ready to get on the gas and face a new challenge, Red Bull GASGAS Factory Racing’s Mattia Guadagnini will jump onto the MC 450F for the remainder of the 2022 FIM Motocross World Championship.

After a few challenging first races in MX2, Mattia Guadagnini will race an MC 450F at the upcoming stops of the 2022 FIM Motocross World Championship. ‘101’ has already tested his new steed and there is plenty of excitement in the air as the GASGAS squad head to the Grand Prix of Sardegna.

Competing at just twenty years of age, Guadagnini will be able to absorb a lot of knowledge on the MC 450F and put that to good use in the future. It is such an exciting time for him to learn and grow in the very competitive MXGP division. Everyone at GASGAS Factory Racing is pleased to see him hit another milestone in his career.

“I had great expectations for this season. I prepared very well with the team, but things in the races have gone wrong too many times. I have made mistakes and also had some bad luck! We are not yet halfway through the season, but realistically it is very difficult to achieve the goals that I had set for myself. I thought that it would be more logical to look forward and prepare for next season, especially as I have so many rounds to adapt to the MC 450F. I talked about it with De Carli and the team, and perhaps this change will be positive for everyone? I thank the team and management for this opportunity.”

“Between mistakes and unlucky episodes, Mattia is going through a difficult period. We all know his talent – he can return to doing very well and is still in the top ten in MX2. Mattia always works with great commitment and is a mature, determined, professional and very fast rider. We talked about it, for his interest, and among the various possibilities he himself decided to move to the MXGP category. This transition was planned for next season, but we are all convinced that it is a good solution to make the move immediately. In MXGP he will not have to worry about the results. There are thirteen rounds to race, in which he can become familiar with the 450 and thus prepare himself as best as possible for 2023.”

Red Bull GASGAS Factory Racing will continue to be represented by Simon Langenfelder in the MX2 division. Langenfelder sits third in the championship standings and has one Grand Prix win to his name so far.