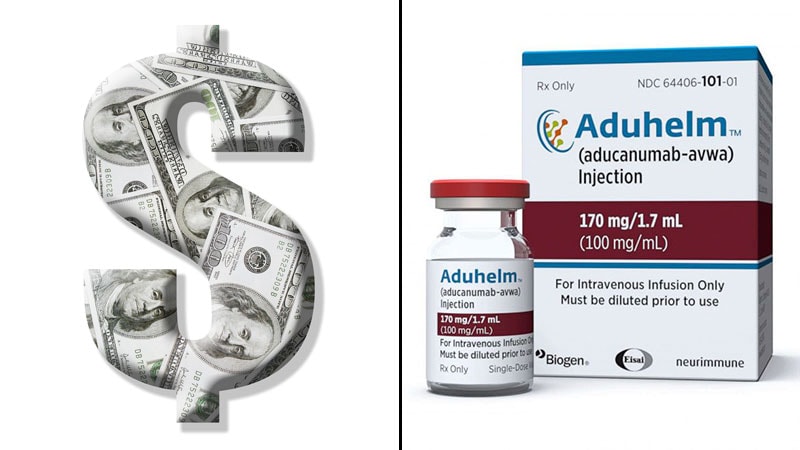 On December 20, Biogen announced a plan to reduce the annual US cost of the drug by 50% — from $56,000 to $28,200 — as Centers for Medicare & Medicaid Services (CMS) officials were deciding on Medicare’s coverage policy for the medication.

US Food and Drug Administration (FDA)-approved drugs in this class would be covered for those with Medicare only if they are enrolled in qualifying clinical trials, CMS said. The agency will accept public comments on this decision for 30 days.

In a statement, CMS Administrator Chiquita Brooks-LaSure said the agency is “committed to providing the American public with a clear, trusted, evidence-based decision that is made only after a thorough analysis of public feedback on the benefits and risks of coverage for Medicare patients.”

As reported by Medscape Medical News, the FDA approved aducanumab on June 7 via an accelerated approval process. The approval, which set off a firestorm of controversy that included resignations of three FDA Peripheral and Central Nervous System Drugs Advisory Committee panel members, was granted based on the medication’s ability to reduce beta-amyloid plaque.

Under the accelerated approval mechanism, Biogen still must deliver solid scientific proof that aducanumab has clinically significant disease-modifying effects. However, the final evidence won’t be in any time soon. In its approval letter, the FDA set a 2030 deadline for a final report on this research.

The Medicare decision marks something of a shift in the agency’s approach to paying for medications. On a call with reporters, Tamara Syrek Jensen, JD, director of CMS’ Coverage and Analysis Group, admitted that the agency had taken an “unusual but appropriate” step in trying to set a national policy regarding payment for a drug.

On the same call, Lee Fleisher, MD, CMS’ chief medical officer, addressed the challenges presented by aducanumab, given the serious need for treatments for AD.

“As a practicing physician, I cannot overemphasize the need to understand the risks and benefits of a given treatment in order to better inform patients and their families,” Fleisher said. “We do know based on some of the evidence that there may be potential promise with this treatment. That’s why it is critical for us to pursue additional scientific evidence.”

The coverage-with-evidence program will allow Medicare to aid in gathering data, while protecting patients, Fleisher noted.

“CMS is using its authority provided by Congress to determine if the drug is considered reasonable and necessary, meaning that the benefits of improvement of cognition outweigh the harms in the Medicare population,” Fleisher said.

Cambridge, Massachusetts-based Biogen urged CMS to reconsider its approach to payment for aducanumab. In a statement, the company said Medicare should cover “the class of amyloid-directed therapies with the populations studied in the respective clinical trials and guided by expert recommendations for appropriate use.”

“We believe Alzheimer’s patients should have access consistent with other therapies with FDA accelerated approval,” Biogen said in the release.

In the company’s view, CED approach will “significantly limit patient access to an FDA-approved treatment, especially for underserved patients as evidenced in other CED determinations.”

“CEDs can take months to years to initiate, and hundreds of Alzheimer’s patients — the majority of whom are Medicare beneficiaries — are progressing each day from mild to moderate disease stages, where treatment may no longer be an option,” Biogen said.

Drug makers had been worried about CMS opting for CED even before the draft decision was unveiled.

There already are concerns among drug makers about CMS efforts “to impose new coverage barriers — and, in particular, coverage with evidence development (CED),” Crystal Kuntz, vice president of policy and research at BIO, and Andy Cosgrove, the organization’s senior director for policy and research, noted in a July 2021 comment about the aducanumab review.

Medicare should instead continue to provide access to medicines for indications that the FDA has approved, with additional flexibility for off-label indications of cancer drugs, they noted.

“We believe this should continue to be the case, to ensure that vulnerable Medicare beneficiaries have necessary access to life altering and lifesaving medications,” the BIO officials wrote.

However, CMS also received many pleas from physicians asking the agency to limit use of aducanumab at least until there is evidence that it produces a significant clinical benefit.

In a press release, Howard Fillit, MD, cofounder and chief science officer of the Alzheimer’s Drug Discovery Foundation, applauded the decision, describing it as “the right call.”

“This decision supports conducting additional clinical trials, which are needed to obtain further insights into the clinical efficacy and safety profile of this drug in real world populations. This decision has implications for other drugs in this class in late-stage development. If these trials show more clear and robust clinical efficacy, then it is possible the FDA will give these amyloid monoclonal antibodies full approval, and Medicare would be likely to provide full payment,” he added.

Ranking Seven COVID-19 Antigen Tests by Ease of Use: Report
Health Issues in Women Midlife Linked With Health Decline at 65