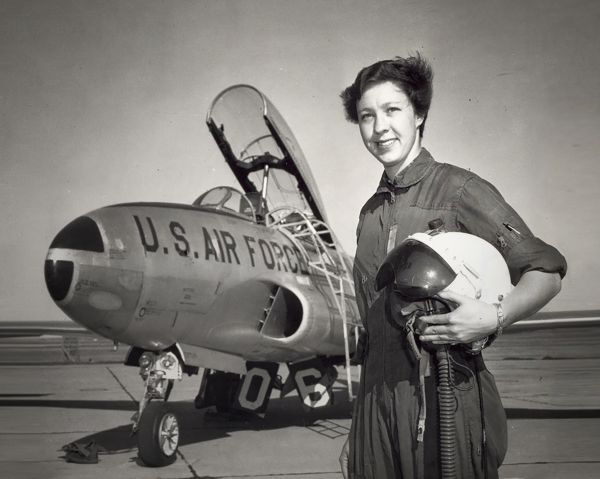 When Amazon founder Jeff Bezos offered her a seat on the first crewed flight of his space tourism enterprise Blue Origin, it was an invitation aviator Wally Funk had waited six decades to receive.

Funk, age 82, is one of a dozen women who have come to be known as the Mercury 13 in pointed contrast to NASA’s original astronauts, the Mercury 7. Funk and the others were skilled pilots who, like their male counterparts, dreamed of flying even higher, to space. But they were never included in NASA’s vision for spaceflight and never became astronauts — until now.

“Wally Funk has really never given up on her dream of spaceflight,” Margaret Weitekamp, curator of the Smithsonian’s National Air and Space Museum’s space history department who wrote a book about the women who lobbied to be included in NASA‘s astronaut program, told Space.com. “There’s a nice bit of poetic justice in including her on this flight.”

Funk and Bezos will make up half the crew of the first crewed flight of Blue Origin’s reusable suborbital space tourism vehicle, dubbed New Shepard, when it launches from the west Texas desert on Tuesday morning (July 20). She’ll become the oldest person to fly in space when she launches.

But Funk laid the groundwork for this flight during a brief period six decades ago, when she became one of the group that was, decades later, dubbed the Mercury 13 and is often misleadingly portrayed as a sort of women’s counterpart for NASA’s first group of astronauts, although the agency never endorsed their efforts and only began recruiting women for spaceflight in 1978.

“It was never a NASA project, it was really a privately funded investigation into women’s physical capabilities for spaceflight,” Weitekamp said. Funk, already an accomplished pilot in her early 20s, learned about the project in 1960 when she read about Jerrie Cobb, a female pilot who volunteered to undergo tests meant to determine whether a human body could withstand the strain of spaceflight.

Those tests were developed for NASA by a team led by William Randolph Lovelace and were designed to identify any weaknesses that might identify hidden health issues before flight. NASA used the tests to evaluate the military test pilots it had recruited for the young human spaceflight program.

But where the agency was focused on reaching milestones in space exploration, Lovelace had a bigger picture in mind, an ideal pulled from science fiction of whole offices lofted from 1950s America into orbit. Just as women were the secretaries and telephone operators on Earth, so too they would be in space, this line of thinking went, according to Weitekamp.

Independently of his NASA work, then, Lovelace was interested in how women’s bodies fared during these tests, which spanned a week. The tests included everything from a tilt table and a stint in a sensory deprivation chamber to examining the women’s stomach acids.

Related: Blue Origin’s launch with Jeff Bezos: Everything you need to know

Funk went into them with a competitive streak.

“Her aim was to not only to just do it to the best of her ability, every test, but to try to do better than whoever had gone before her,” Sue Nelson, a science journalist who later traveled with Funk to research her book, “Wally Funk’s Race for Space” (Chicago Review Press, 2019), told Space.com. “She just is immensely driven and competitive, which is a sort of the typical early astronaut, test pilot type really — she fits the mold of those early astronauts.”

And Funk and 12 other women were deemed to have passed Lovelace’s tests. “The 13 of the 25 who became the finalists on average did as well or in some cases better than the Mercury 7 astronauts did,” Weitekamp said. (Some of the tests focused on cardiovascular health, where the women had a key advantage, she noted, since most of the Mercury 7 smoked.)

Lovelace wanted to bring those 13 in for still more tests, this time at government facilities, but couldn’t get approval. And while some, like Funk, applied directly to NASA, it didn’t make a difference.

“I got a hold of NASA, four times, I said, ‘I want to become an astronaut.’ But nobody would take me,” Funk said in the video released to announce her flight. “I didn’t think that I would ever get to go up.”

Unlike the close-knit men of the Mercury program, Funk hadn’t met most of the other participants, since the women had undergone the initial tests in ones and twos. And, of course, whereas the Mercury 7 became celebrities and spent the bulk of their careers with NASA, the women found other ways to fill their time.

“It was a very short part of their lives,” Nelson said. “Wally just kept on with her career and doing loads of interesting things.”

For Funk, with no spaceflight on the horizon, she set about traveling on Earth instead for a few years, then building a career as a pilot, flight teacher, and eventually investigating plane crashes and other safety issues for the government. In the video released with Blue Origin about her joining the flight, she said that she has racked up 19,600 flight hours on a variety of aircraft and has taught more than 3,000 people to fly.

NASA eventually came around on flying women, too late for Funk and the others. Sally Ride became the first American woman in space in 1983, although it wasn’t until 1995 that NASA made Eileen Collins the first female pilot of the space shuttle. (Collins invited Funk and others who underwent Lovelace’s tests to watch the launch.)

“Like so many things that we see in women’s history, the advancement happens in fits and starts,” Weitekamp said. “There’s some interest and then it doesn’t necessarily have a direct legacy.”

Related: From Yuri Gagarin’s launch to today, human spaceflight has always been political

Blue Origin has long showed an interest in nodding to spaceflight’s history, so it’s not a coincidence that Funk will step inside the New Shepard capsule on its first crewed flight. (The vehicle itself, of course, is dubbed for one of the group she so notably did not become, Alan Shepard, who became the first American in space with a suborbital flight on May 5, 1961.)

For Nelson, seeing Bezos’ announcement was a poignant moment. “It’s poignant, she has waited a lifetime for this,” she said. “I just got a lump in my throat and tears welled up.” And while Funk has long held a ticket with Blue Origin competitor Virgin Galactic, Nelson said, the New Shepard model represents a different vision of spaceflight.

“It’s so much more akin in my eyes as a sort of old-fashioned astronaut experience, more similar to the one that if NASA had allowed women into the astronaut corps 20 years earlier,” Nelson said.

And from Nelson’s description of calling to congratulate her friend on the invitation, Funk is conscious of the weight of history that she’ll carry into the capsule.