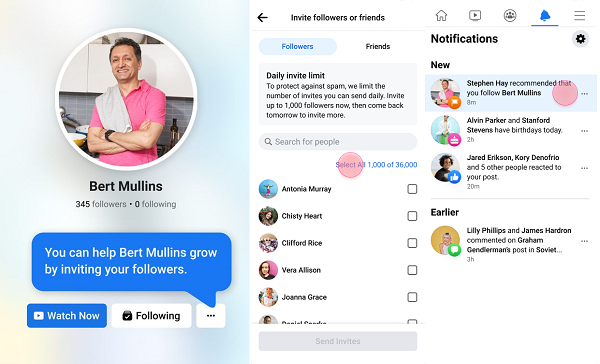 Creators are Meta’s big focus right now, and specifically, providing more ways for creators to build their audiences (and reliance) on both Facebook and Instagram.

Which is where the latest Facebook Page updates come in. Today, Meta has announced a range of new creator-focused elements, including new endorsement notifications to support fellow creators, new templates to help recognize top fans, restricted posts for subscribers and more.

First off, on endorsements – with its new Creator Endorsement feature, people who manage a Creator Page can now recommend that their fans also follow another creator, via direct notification. Which could get annoying quick, but it could also be a way to highlight related creators and content that your audience may not have been aware of otherwise, while also helping you build connections in your niche.

Along the same lines, Meta’s also testing new Rising Creator alerts to help people discover new voices that they may be interested in. Highlighting rising creators is a key element in Meta’s broader recommendations push, which has seen it pumping more content from profiles that you don’t follow into your FB and IG feeds. This seems like another, less intrusive way to facilitate the same – though Meta has also noted that it’s going to double the amount of recommendations in user feeds by the end of the year (which is coming up fast).

On the audience-building front, Facebook’s also adding new post and Story templates, providing another way to show appreciation for your fans. They may look pretty generic, but individual recognition can play a big part in maximizing connection, and building community, beyond just ‘followers’, in the app.

Facebook’s tested similar in the past with brand Page ‘Top Fans’, but this new process is more directly aligned with creators, and boosting engagement with your fan community. It’s also somewhat similar to Twitter’s evolving Super Follow audience selection tools, which can also be used to build more direct connection with fans in the app.

Finally, Facebook’s also testing a new composer selector option in the navigation bar to make it easier to create new content in the app.

As noted, creators have become a key focus for Meta, with Instagram also looking to highlight more creator content, in the hopes that by amplifying more emerging voices, that will better align them to each app, and keep them sharing exclusive content with their audiences.

The more creators Meta can rope in, the more that benefits its content ecosystem, though it remains to be seen whether opening the doors to more creators actually leads to more time spent in app, as a lot of smaller creators, in particular, likely won’t be able to sustain an adequate posting cadence to maintain engagement.

There’s also a strong argument to be made that only a finite number of creators will ever actually see success, no matter how many incentives and tools you put in place to encourage such activity. Theoretically, more creators should equal more engagement, and ultimately, more money for the platforms, but it may not actually work out that way in the end.

We’ll see how Meta’s push goes, as it continues to seek out more ways to highlight emerging stars in user feeds.