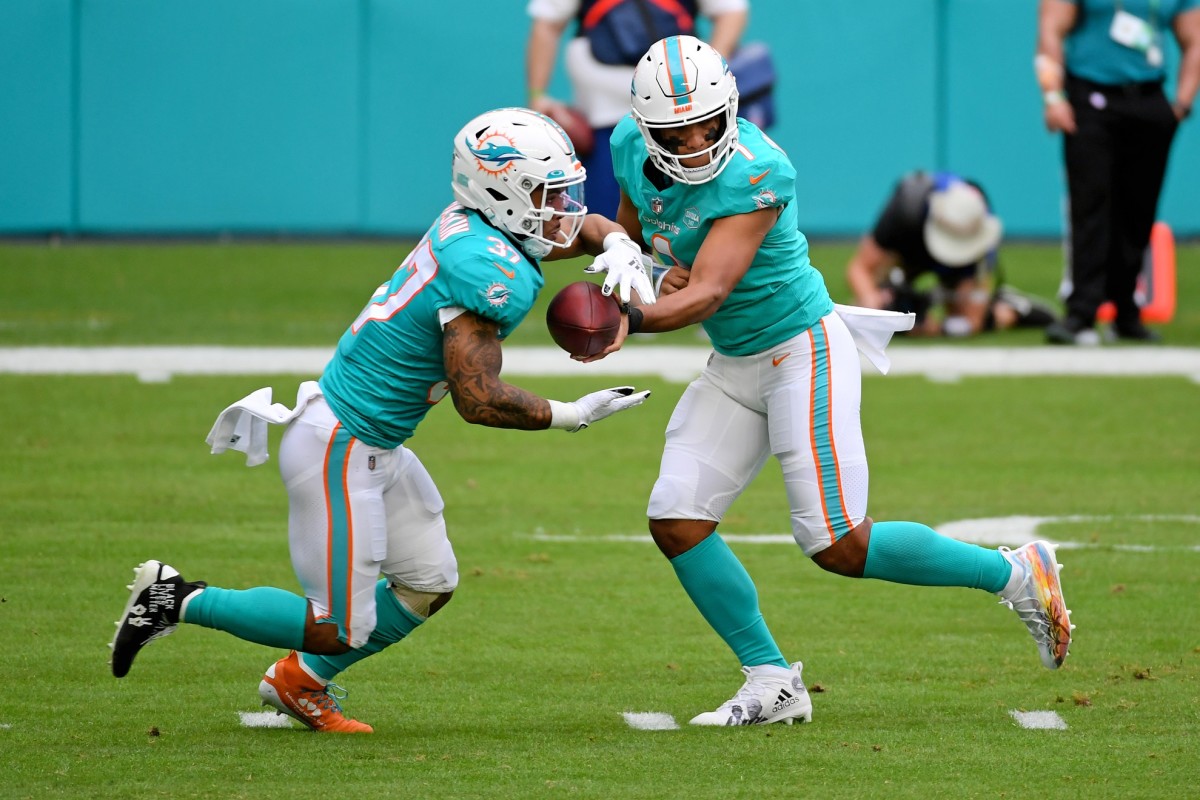 As the Miami Dolphins prepare for the start of training camp, we break down every position with a look back at what happened in the offseason, what to watch in the summer and what might happen in the regular season.

We continue the series with the running backs.

• Salvon Ahmed — Second year out of Washington; entered the NFL as an undrafted free agent

• Malcolm Brown — Seventh-year player out of Texas; entered the NFL as an undrafted free agent

• Patrick Laird — Third year out of California; signed with the Dolphins in 2019 as a rookie free agent

• Jordan Scarlett — Second year out of Florida; entered the NFl as a fifth-round pick of the Carolina Panthers in 2019

• Malcolm Perry – Listed as a running back/wide receiver; second year out of Navy; seventh-round pick of the Dolphins in 2020

May 13 — Signed Doaks to a four-year contract

The big story of 2020 at running back wasn’t so much what happened in the regular season, but rather what happened in the spring. Armed with five picks in the first two rounds of the 2020 NFL draft, the Dolphins instead chose to go into the season with veteran free agent pick-up Jordan Howard and trade acquisition Matt Breida. In the end, though, it was 2019 seventh-round pick Myles Gaskin who was the most productive of all the backs. He average almost 100 yards from scrimmage in his 10 games while finishing second on the team with five touchdowns. Howard turned into an absolute bust and was gone by mid-November, while Breida made minimal impact.

This is an interesting position because the opportunity would seem to be there to carve out roles. Yes, Gaskin figures to enter training camp first on the depth chart, but it’s also not as though he’s a clear, unmovable No. 1 player at the position. The summer will be a time for the Dolphins to see what they have in newcomer Jordan Scarlett and seventh-round pick Gerrid Doaks, as well as finding out how to make best use of free agent acquisition Malcolm Brown.

As was the case last offseason, the biggest story in 2021 involved the draft and not coming away with one of the top prospects at the position — Najee Harris, Travis Etienne or Javonte Williams. The one move of note was bringing in Brown, a similar back in style as Howard was last year.

The obvious player to mention here would be Scarlett, who appeared in nine games for the Carolina Panthers in 2019 after playing at the University of Florida, but let’s also not forget about Patrick Laird. He seems to be a forgotten man when everyone talks about the running game but also could end up staying on the roster for many years for his intangibles, including his special teams work.

This will be about how many running backs the Dolphins end up keeping and winning those final spots. At this time, one would think that Gaskin and Brown are locks, with Laird maybe the third-most likely to make the 53-man roster based on what we wrote earlier. So where does that leave Ahmed, Doaks and Malcolm Perry, listed on the roster as a running back/wide receiver. While rookie draft picks generally have a clear advantage in any roster battle, don’t automatically assume that Doaks will be on the 53-man roster if he doesn’t show much in training camp and the preseason.

BETTER OR WORSE THAN THIS TIME LAST YEAR

With the benefit of hindsight, it’s easy to say the Dolphins are better now than they were last year because of the problems encountered by Howard and Breida. But if we’re being honest, Howard and Breida looked like two pretty good acquisitions as training camp started last summer. In fact, it’s pretty safe to say that the Dolphins looked like they were in better shape at running back with more proven players last summer than they are at this time.

It should be pretty clear by now the Dolphins aren’t interested in bringing in a big-name running back to be a workhorse, which means the likelihood is that Gaskin will end up as the starter for the opener at New England.