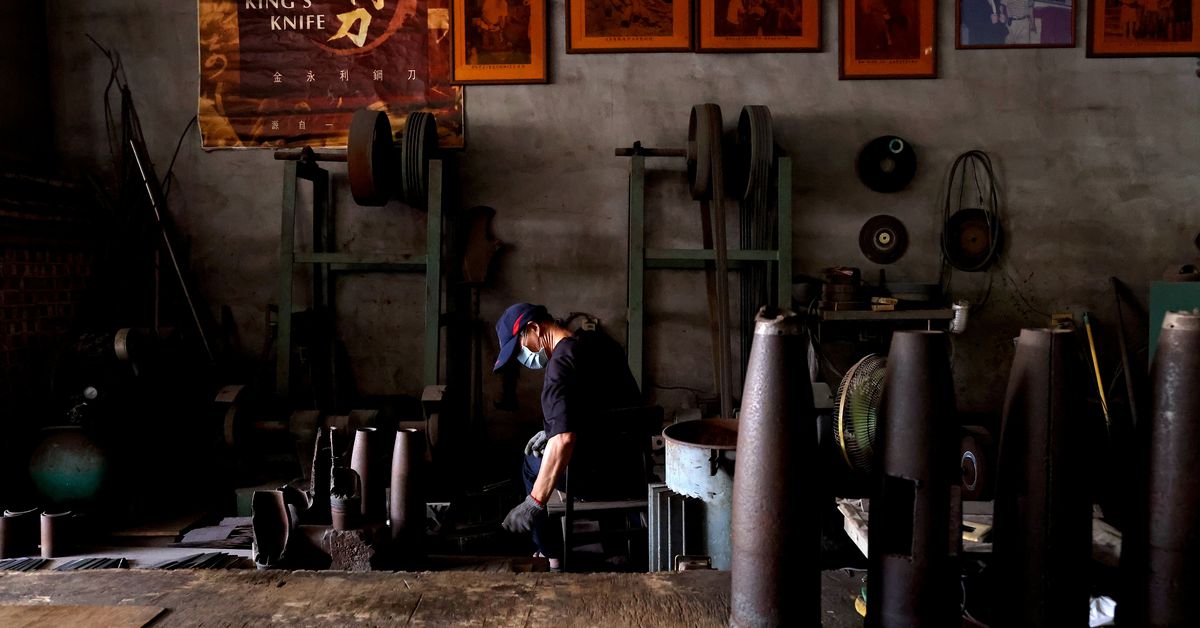 A bladesmith makes knives out of shells fired from China between 1958 to 1979 at his workshop on Kinmen, Taiwan, October 16, 2021. REUTERS/Ann Wang

KINMEN, Taiwan, Oct 26 (Reuters) – Chen Ing-wen strides up to a rocky outcrop some 3 km (1.9 miles) from China’s coast on Taiwan-controlled Kinmen island and demonstrates how as a soldier he used to shoot from there at Chinese trawlers that got too close.

Sitting on the front line between Taiwan and China, Kinmen is the last place where the two engaged in major fighting, in 1958 at the height of the Cold War, and where memories of war are burned into minds decades later – large model soldiers point guns at China from some old bunkers.

(Open https://reut.rs/3aZpKrd in an external browser to see a picture package on Kinmen island.)

China views Taiwan as part of its territory, and has never renounced the use of force to bring it under Beijing’s control.

A recent spike in tensions, with China’s air force carrying out four days of mass incursions into Taiwan’s air defence zone starting on Oct. 1, caused alarm in Western capitals and Taipei that Beijing may be planning something more dramatic.

But in Kinmen, less than an hour by plane from Taipei and directly facing the high rises of China’s Xiamen, there is no sense of panic nor restrictions on visiting from Taiwan, but only a feeling of surprise over questions about whether it is advisable to come.

“We are a very safe place. Whether economically or on people’s lives we have not felt any impact from cross-strait tensions,” Ting Chien-kang, who runs the Kinmen government’s tourism department, told Reuters outside a ruined house briefly occupied by Communist troops in an abortive invasion of the island in December 1949.

Kinmen, along with the Matsu archipelago further up the Chinese coast, has been held by the government in Taipei since the defeated Republic of China forces fled to Taiwan in 1949 after loosing a civil war with the Communists.

Regular shelling did not end until Dec. 15, 1978, when Washington formally recognised Beijing over Taipei, though by then it was shells fired on odd-numbered days carrying propaganda leaflets that fell.

Still, those shells could and often did kill people, and terrified residents – a memory that haunts older Kinmeners.

“I don’t want that to happen again,” said Jessica Chen, 53, who runs a tea shop and remembers the shelling. “People may think the situation is tense, but we’re used to it.”

At its nearest point, from the Mashan observation post, the main island of Kinmen is at low tide less than 2km from Chinese-controlled territory. It was from there former World Bank chief economist Justin Lin swam across to defect to China in 1979.

A much-reduced military garrison remains, way down from 100,000 at the height of fighting, with tanks on occasion rumbling through back roads and soldiers guarding hidden entrances to command posts dug under the thick rock.

With new weapons, including precision missiles, any Chinese attack now would likely bypass Kinmen and go straight to military targets on Taiwan, though Kinmen, which relies on China for a stable water supply, could easily be blockaded.

Kinmen’s government is working hard to promote the island as more than just a war monument, hoping to entice younger visitors to see its otters and go bird watching, to stay in trendy new boutique guest houses and enjoy the local oysters.

The time warp Kinmen exists in is everywhere to see, though much of that is intentionally kept for the tourists.

The old-fashioned language on carefully preserved propaganda signs calls the Communists “bandits”, and statues of late leader Chiang Kai-shek, a man now vilified by many Taiwanese for his often brutal dictatorship, laud him as the “people’s saviour”.

Some have turned the past tensions into profit, like Kinmen’s renowned makers of knives from old shell casings, even if they too do not want to go back to the old days of hiding in air raid shelters from Communist attacks.