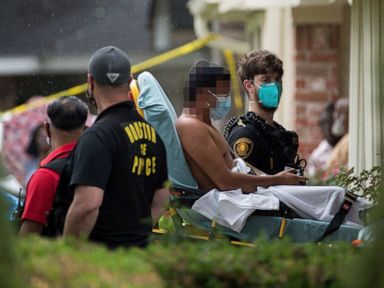 More than 90 people were found “huddled together” in a home in Houston in a possible case of human smuggling, the Houston Police Department said Friday.

No one was seriously injured, but Houston Police Assistant Chief Daryn Edwards said, “We are concerned that there may be some positive COVID cases inside the house.”

Some people have fevers and some have lost their sense of smell and taste, Edwards said at a news conference.

The Houston police confirmed to ABC station KTRK late Friday that at least five people had tested positive for COVID-19.

The health department had sent workers to the scene to conduct rapid testing, Edwards said.

No children were inside. About five women were in the house and the rest were men, he said.

They told police they hadn’t eaten in awhile, Edwards said, and they were brought food and water.

Houston police said they were made aware of a kidnapping call Thursday night, and authorities worked through the night to try to find the kidnapping victim’s location. Authorities executed a search warrant at a two-story Houston house and determined this was a “human smuggling investigation,” Edwards said.