NASA’s DART Is Set to Crash Into an Asteroid, On Purpose

Home /Science/NASA’s DART Is Set to Crash Into an Asteroid, On Purpose 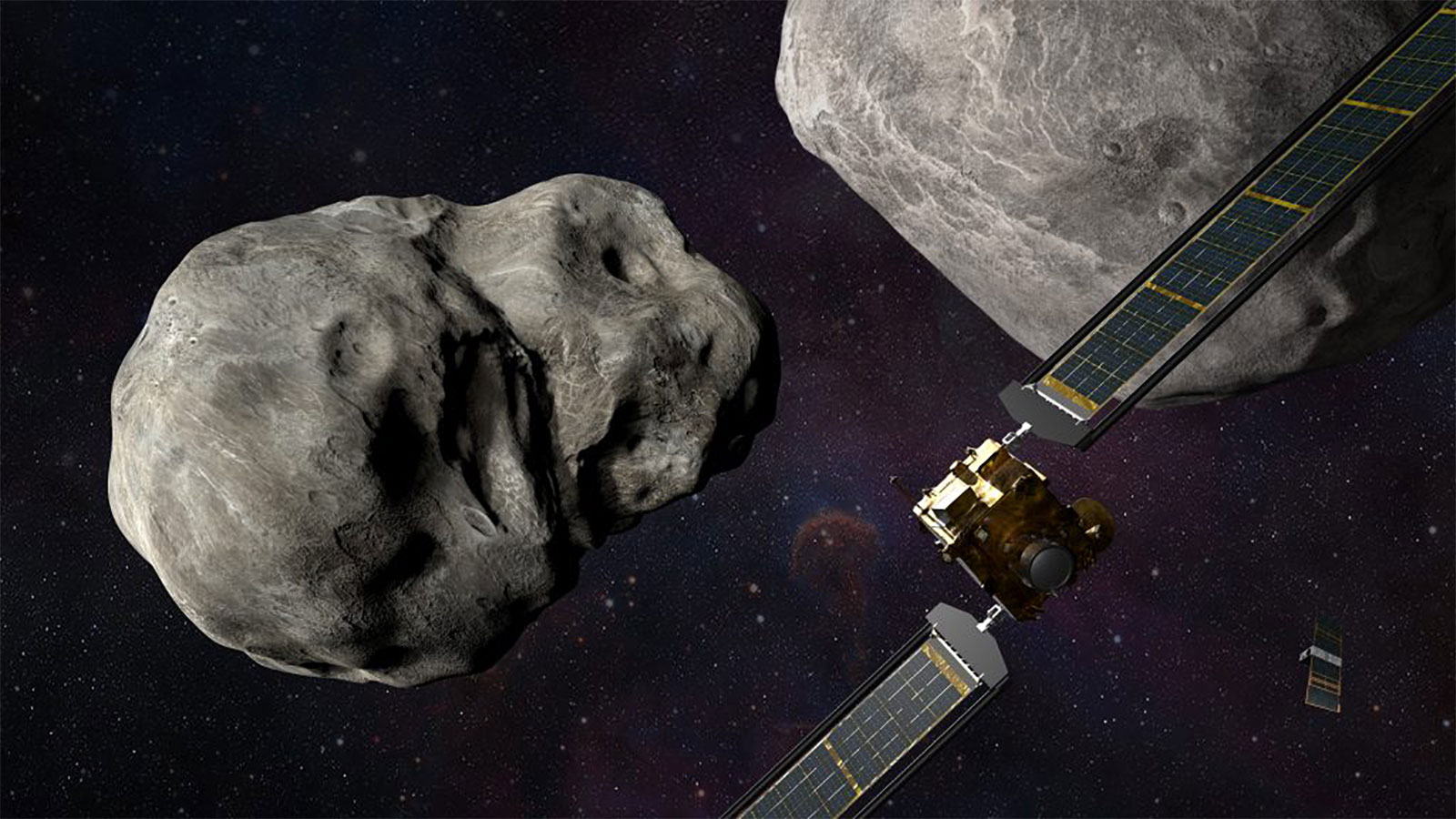 In November 2021, NASA’s Double Asteroid Redirection Test (DART) robotic spacecraft took off into space on a SpaceX Falcon 9 rocket from Vandenberg Space Force Base in California, on a mission to intercept and change the orbit of an asteroid. Now it’s finally time to see the mission in action.

The $325 million spacecraft has traveled 6.8 million miles (11 million kilometers) from Earth since November and Monday, Sept. 26, it will attempt its goal of crashing into Dimorphos, a small asteroid that orbits a second, larger piece of space rock, Didymos, as the pair travels in an elliptical orbit around the sun.

While there was never any threat of Dimorphos hitting Earth, it provides a safe target for testing technology that someday might help to protect Earth from a catastrophic collision with a killer asteroid, such as the one that wiped out the dinosaurs and 75 percent of plant and animal life 66 million years ago.

When it reaches Dimorphos Monday, DART will slam into the space rock at a speed of about 4.1 miles (6.6 kilometers) per second, hopefully giving the asteroid enough of a jolt to alter its orbit around its partner, just slightly, but enough that the alteration can be observed by telescopes on Earth.

“It’s a difficult job,” NASA Jet Propulsion Laboratory’s (JPL) Julie Bellerose said in a press statement. She leads JPL’s DART spacecraft navigation team. “A big part of what the navigation team is working on is getting DART to a 9-mile-wide (15-kilometer-wide) box in space 24 hours before impact.” Then, Bellerose said, the mission’s final trajectory correction maneuver will be executed by mission control on Earth. From then on, everything else is up to DART.

“DART is a test of the effectiveness of the kinetic impactor technique for altering an asteroid’s orbital path, and of the spacecraft technology used to deliver a kinetic impactor to the target asteroid,” Lindley Johnson, NASA planetary defense officer, explains via email.

Here are five things you should know about DART.

1. Crashing a Spacecraft Into an Asteroid Isn’t Easy

“Dimorphos is the smallest object that has ever been a mission target, and we are coming in very fast with a need to impact on the first try, without knowing fundamental things like Dimorphos’ shape or exact size,” explains Andy Rivkin, the DART investigation co-lead from the Johns Hopkins Applied Physics Laboratory, which is leading the project for NASA. “It’s about about 3,600 feet (1,100 meters) from the center of Didymos to the center of Dimorphos, and it’s probably less than 1,968 feet (600 meters) from the surface of one to the surface of the other. We don’t want to miss, and we don’t want to hit Didymos.”

Worse yet, the spacecraft has to overtake that target at such a high speed that there’s very little margin for error — “literally the blink of an eye,” says DART program scientist Tom Statler via email. To achieve the necessary precision, the spacecraft will be guided by SMART Nav, a totally automated navigation system that requires no human input. The spacecraft also will utilize the Didymos Reconnaissance & Asteroid Camera for OpNav imaging instrument, aka DRACO, to see where it’s going. “The DRACO camera will be able to see Dimorphos and distinguish it from Didymos only in the last hour before impact,” Statler says.

But it’s all good, because that sort of technology may come in handy someday. “If we ever need to carry out a kinetic impact to prevent a natural disaster, we might need to do so quite far from Earth, which would make autonomous control by the spacecraft absolutely essential,” Statler says. “That’s why we want to demonstrate and validate this technology with DART.”

2. Scientists Don’t Know What Will Happen When DART Hits the Asteroid

“The asteroid itself is the hardest thing to predict. We know what spectral type of object it is, which means we have a reasonably good idea of the type of material it’s made of,” explains Cristina A. Thomas, an assistant professor in the department of Astronomy and Planetary Science at Northern Arizona University, who’s spent years studying Dimorphos and will continue to monitor it after the impact.

“Didymos is similar to what we call an ordinary chondrite meteorite. It’s rocky, but not metallic. That gives us a good place to start with our thinking. We don’t know if Dimorphos is a solid object or if it’s a rubble pile — lots of smaller things held together by gravity. This will change the impact itself and how much material is ejected from the crater. That material, called ejecta, has its own momentum which gives extra energy to the deflection. This enhancement factor is known as ‘beta.'”

“The uncertainty of the value of beta gives us an uncertainty in how much we predict the orbit will change,” Thomas continues. “Dimorphos currently has an orbital period around Didymos of approximately 11 hours and 55 minutes. We anticipate changing that orbital period by at least 10 minutes. That might not seem like much, but if we were trying to deflect something away from Earth, the change would not have to be large, especially if we do it far in advance.”

3. DART Is Humans’ First Attempt to Adjust the Cosmos

DART is an early step in protecting human life from being wiped out by a space rock, but it also changes humanity’s relationship to the cosmos. Up to this point, space has been something that we watch from afar and occasionally send brave souls to visit for brief periods. But now, it’s going to become something that humans can tinker with, just as we’ve altered our own planet.

“Perhaps the biggest point is that DART will be humanity’s first attempt to deliberately change the orbit of a solar system body,” Martin Elvis, an astrophysicist at the Center for Astrophysics Harvard & Smithsonian and author of the 2021 book “Asteroids: How Love, Fear, and Greed Will Determine Our Future in Space,” explains via email.

“The amount we will change the orbital speed of Dimorphos, the moon of the near-Earth asteroid Didymos, will only be by less than a snail’s pace (literally) — 4.6 feet (1.4 meters)/hour,” Elvis says. “Yet it is not zero. The architecture of the solar system will be subtly altered.” He says that while this doesn’t have any immediate importance, it is symbolic. “There are those who will thrill to this stepping out of humanity. There are others who will say, “‘Not again. Must we repeat our environmental mistakes, only now on a far larger scale?'”

4. Even a Small Asteroid Could Do a Lot of Damage If It Struck Earth

Dimorphos might look puny compared to the massive asteroid that wiped out the dinosaurs, whose size has been estimated at about 6 miles (10 kilometers) across. But even a small asteroid is capable of inflicting serious harm if it slams into Earth. Johnson notes that it’s three times the size and possibly five times the mass of the asteroid that created the Barringer Crater in eastern Arizona some 50,000 years ago.

“It would impact with an estimated energy of roughly 10 megatons of TNT — larger than any nuclear bomb — and create a crater of a few miles in diameter and a quarter mile (0.4 kilometers) in depth,” Johnson notes. “Blast effects might extend for 150 miles (241 kilometers) in all directions from the impact site.” The prospect of such a disaster makes it conceivable that some future asteroid defense mission might need to target an object of Dimorphos’ size.

If DART works as planned, “it will validate both the kinetic impactor technique for planetary defense purposes and that current technology enables our ability to perform the deflection,” Johnson explains. But that doesn’t mean that NASA will rush to build a spacecraft that can perform the same feat and have it ready to launch at the first glimpse of an asteroid that’s a threat to hit Earth.

“A significant asteroid impact is an extremely rare natural disaster, and what techniques might be used to deflect one detected in advance would be very scenario-dependent, especially on how many years in advance it was discovered,” Johnson says. “Decades may pass before the next major impactor is discovered and the planetary defense program of that time in the future may want to use the more advanced technology that will likely be available by then.”

On the other hand, “how DART compares to what might get used in an actual emergency will depend in part on how the experiment goes,” Rivkin says. That future planet protector “may not be terribly different” from DART’s design.

Is There Really a Cork Crisis?
What Does Russia’s Partial Military Mobilization Mean?