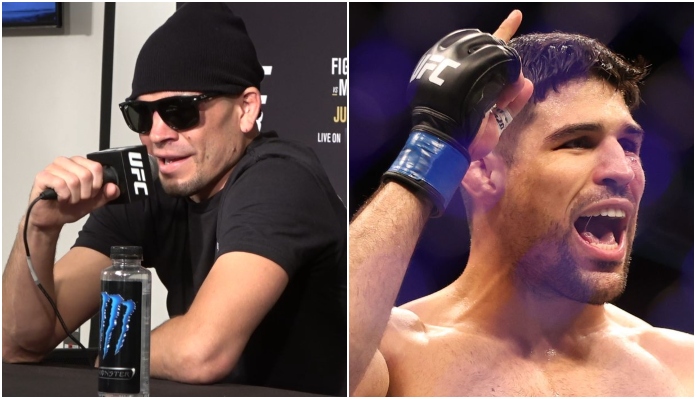 Nate Diaz seems to be looking to get back in the octagon before 2022.

After recent back and forths with his old foe in Conor McGregor and Gilbert Burns, Diaz has shown interest in the surging Vicente Luque. On Monday, the Stockton, California native shared even further openness toward the matchup.

“So let’s fight,” Nate Diaz said in response to Luque’s callout of him following a first-round submission of Tyron Woodley in March.

Vicente Luque has been on an absolute tear in recent years with only a single defeat separating a would-be 11-fight winning streak. Of the 10 victories he’s achieved in his past 11 fights, Luque has finished nine of them — six knockouts, three submissions. Stephen “Wonderboy” Thompson managed to stifle the 29-year old at UFC 244 in 2019. Since then, he’s put together a four-fight streak with the most recent win being his biggest at UFC 265 — a first-round submission via d’arce choke against Michael Chiesa.

Nate Diaz, on the other hand, fought Leon Edwards at UFC 263 in June. Prior to Thompson, Edwards was the last man to defeat Luque.

In their five-round non-title affair, Edwards battled his way to unanimous decision victory that dropped Diaz to 1-3 in his last four outings. His prior loss coming at the same event where Luque lost to Thompson when taking on Jorge Masvidal for the BMF title.

Nate Diaz last had his hand raised at UFC 241 in August 2019 with a unanimous decision over Anthony Pettis.